When we last featured Overton Square as our neighborhood spotlight in early 2014, there were a lot of restaurants and shops that had either just opened or were about to open. As of this writing, the Midtown entertainment district is not only thriving, it’s full.

Stores and restaurants have been opening like clockwork since we last featured the Square, so that means there are more reasons than ever to visit! Here’s what’s new since we last checked in. The corner of Madison Avenue and Cooper is Ground Zero for Overton Square. Image: Lisa Buser

Overton Square’s three live performance theaters – The Hattiloo, Playhouse on the Square and The Circuit Playhouse – had already joined the longtime neighborhood movie theater, Malco Studio on the Square, as the district’s performing and visual arts outlets at our last writing. Since then, a number of new live music venues have opened, adding even more vibrancy to the Midtown scene.

Lafayette’s Music Room reopened in 2015, and Memphians old enough to remember its first run were thrilled. Historically, Lafayette’s was known for showcasing legendary musicians such as Billy Joel, Barry Manilow, Big Star, Kansas and Kiss before they became household names. The new Lafayette’s features live music nightly and starting at 11 a.m. on Saturday and Sunday, with local and regional bands playing most of the sets, making it a great way to showcase our local music scene and the city’s fantastic musicians. The two-story space inside is mimicked outside, so there is tons of room for meeting friends and enjoying the live music, or sitting outside and people watching. Some of the most charming things about Overton Square are the narrow paths (we hesitate to call them alleys) that wind between some of the buildings, from Trimble Place to Madison. That’s where you’ll find The Zebra Lounge, which opened in late 2014. It’s the second location of one of Chicago’s oldest piano bars, and there’s always an eclectic mix of people in the cozy booths and along the bar; don’t be surprised if you start singing along to the tunes as the hour gets closer to midnight.

You can bring your lawn chairs and sit under the stars to enjoy some of the city’s best musical talent throughout the spring and summer in the Tower Courtyard facing Trimble Place, near Belly Acres.

On the last Thursday of every month from April to October, the Acoustic Courtyard concert series features local musicians of all genres, playing acoustic sets from 6:30 p.m. on.

Every Tuesday during that same time frame, Bluesday Tuesday takes over the courtyard. The Memphis Blues Society puts on this weekly event that celebrates regional blues musicians. You won’t find any cover music either. It’s all original to the band or performer playing.

Some of the city’s dining hot spots are located in the Square, including Babalu, Local Gastropub and The Second Line, and the list just keeps getting better.

Belly Acres is hamburger nirvana, with a build-you-own menu featuring more options than we can sometimes comprehend. (There’s a nice listing of preordained burgers, sandwiches and salads as well). The city-meets-country theme is fun for everyone, and the restaurant is totally loaded for fun with a full bar, a large patio overlooking the courtyard and even a tractor the kids can sit on, with supervision. 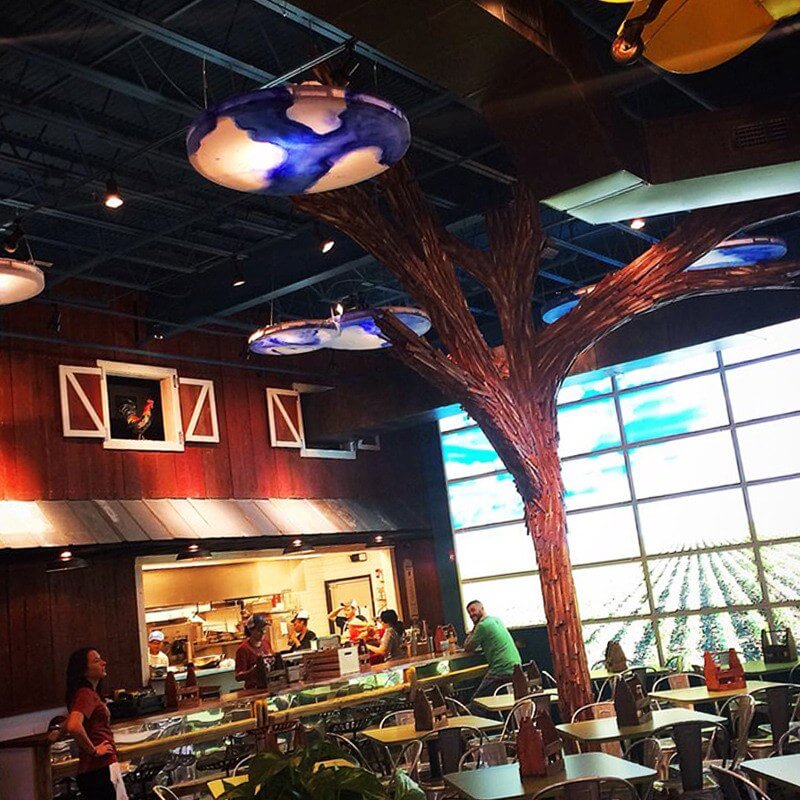 Belly Acres has a city-meets-country atmosphere — check out the video wall, featuring a cornfield!

Jimmy Ishii opened Robata to rave reviews. The noodle-focused eatery offers plenty of other yummy Asian options in addition to the noodle bowls and yakitori (skewers), including rice dishes and a great lineup of interesting appetizers. There’s a fabulous selection of sake and rice wines as well. The Yasai ramen from Robata in Overton Square.

Schweinehaus has a tagline we love: A Celebration of Pork and Bier. How Memphis is that? The German-themed restaurant features servers in Germanic dress and communal, handmade wooden tables in the style of a classic Oktoberfest beer hall, inside and out. They have huge, freshly baked pretzels, German beers, traditional German dishes and a few local dishes, too, including fried chicken and a barbecue sandwich. The patio at Schweinehaus has been voted one of the top ones in Memphis, and it fills up quickly after work and on weekends.

Crazy Beautiful moved to Overton Square from the University of Memphis area in late 2014, just in time for its 10-year anniversary. The boutique for women offers on-trend clothing and accessories, including a few Memphis-made jewelry lines.

There’s always something going on at Overton Square — we can’t wait to see what’s next!

Sign up for StyleBlueprint, and stay connected to the best shopping, dining and events in Memphis!