The Most Controversial & Haunted Lake in America: GA’s Lake Lanier

Lake Lanier is one of the country's most controversial and, according to many accounts, most haunted lakes in America. Millions still visit this North Georgia lake despite its dark past and track record of tragedy after tragedy. Let's dive in. (Figuratively, NOT literally.)

Lake Lanier is one of the most controversial lakes in the United States. It’s also purportedly one of the most haunted. Built atop multiple sunken communities and cemeteries, the lake still attracts tragedies of all kinds. Its dark past and ghostly reputation have been the topics of dozens of podcasts, hundreds of news stories, and the amateur investigative sleuthing of thousands.

Our true-crime-obsessed society likes to shine a blinding spotlight on the “haunted” murky waters this time of year, but the area’s twisted racial past — perhaps the most haunting aspect of all — has seen some much-deserved attention in recent years. Let’s dive (figuratively speaking only) into Lake Lanier and the history, statistics, and folklore that keep many people away, while millions of others still visit every year. 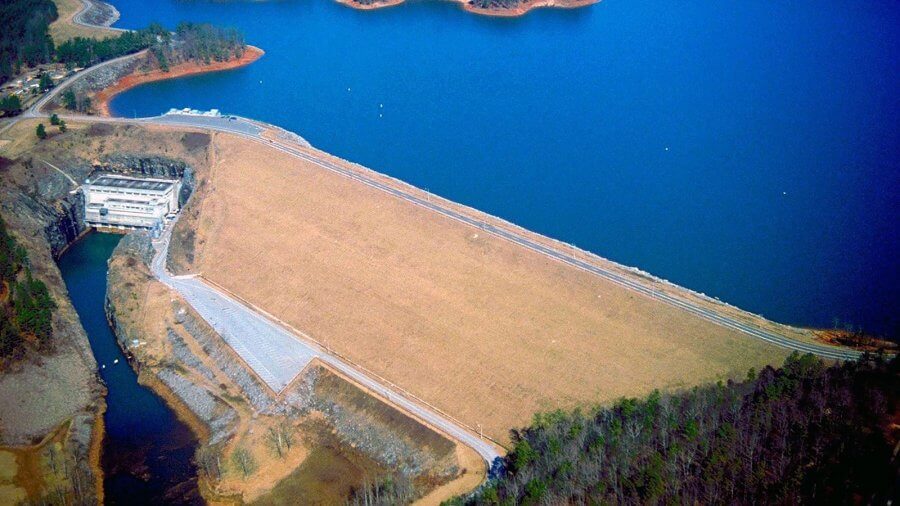 Buford Dam and Lake Lanier were built in the 1950s by the U.S. Army Corps of Engineers to supply water and power and prevent flooding from the Chattahoochee River. Image: NPS.gov

JUST HOW CREEPY IS THE LAKE?

Since its creation in the mid-195os, there have been nearly 700 deaths, many of which are strange, unexplained, and unsolved. About 200 of those deaths have occurred since 1994, and at least 27 of those people have never been found. But still, the lake attracts somewhere between eight and 10 million visitors annually, depending on your source. And it generates about $5 million a year in revenue, according to the Gainesville-Hall County Chamber of Commerce, who also say it’s the most popular Corps lake in America.

RELATED: 9 Haunted Places in Georgia That Will Have You Screaming in Horror

WHAT LIES BENEATH THE LAKE

This lake’s creation was controversial from the start because no one agreed on what it was to be used for — 56% of the budget was allotted to design and construction, and 44% was spent scooping up the necessary land and relocating families, businesses, and churches that thrived on the land now under Lake Lanier. During the five years it took to fill the lake, the U.S. government accumulated 50,000 acres of farmland, displaced 250 families (though one account says it was more like 700 families), and 15 businesses. They also “relocated” 20 cemeteries in the process.

Many of the structures, buildings, and roads that were flooded during the lake’s creation were left as is. Divers find eerie relics of streets, walls, and houses intact like an abandoned ghost town on the lake’s bottom. Discovery Channel’s show Expedition X proved (to the extent they can “prove” something) that there are 20 cemeteries with headstones and graves still at the bottom of the lake that were never removed. The ancestors of the disrupted populations were never relocated, thus sparking many stories of haunted encounters. So many Corps lakes in the South were formed by flooding and shelling communities, but we can talk about neither the success nor the haunting of Lake Lanier without acknowledging one marred aspect of its past. I watched a slew of YouTube videos touting the lake as a vacation or second-home spot. Each had annoyingly upbeat stock music and a very charged comment section. Before it was covered by Lake Lanier, Forsyth County, GA had about 12,000 residents. A thriving black farming community, Oscarville, made up more than a thousand of those people. Many were formerly enslaved residents and their descendants, and many owned their own land. Life centered around farming, church, school, and commerce.

In 1912, two separate incidents occurred a week apart, involving two white women: Ellen Grice said she had woken up to a Black man in her bed, and Mae Crow was found beaten and raped in the woods. White civilians often took “justice” into their own hands by terrorizing Black people for unsubstantiated accusations. This was a tipping point. The back-to-back incidents incited a mob that targeted and ran the black community out of Oscarville.

In the 1920s and ’30s, there was a forcing-out of Black people and a mass transferring of their land by — and to — white people. Beginning in the 1950s, the now almost entirely white community saw the land’s value growing as fast as the Atlanta population was. The flooded waters followed.

The dam’s construction began to split up communities. Neighbors now lived long drives away instead of just a walk. But the community’s grief, hardships, and fear began to subside once people warmed up to the idea of lighthearted lakeside activity — and saw that the Corps wasn’t going anywhere. In fact, trolly-loads of people from nearby areas started swimming in the lake before it was even finished. Swimmers would snag their clothes on the tops of trees that reached up to the surface of the water.

WHY IS THIS PROBLEMATIC TODAY?

Lake Lanier wasn’t designed to be used as a recreational lake. There are concrete buildings, cars, parts of bridges, and other debris in some of the deepest parts of Lake Lanier, but as the lake filled up, the Corps of Engineers assured lake goers that these would cause no harm. Now, the water is receding, and accidents keep happening, adding to the debris. Lake Lanier has seen more than 500 boating accidents, including some mysterious instances of boats going up in flames.

It’s said to be the most dangerous underwater surface in the United States. In droughts, the unpredictable lake floor becomes exposed and ferry boats, cars, bodies, and debris of all kinds get closer to the boats and swimmers at the surface. And the chaotic lake floor makes dredging the lake for missing bodies that much more difficult. The water depths are also unpredictable. One second you are shoulder-deep, and one step forward brings a 30-foot drop. Divers have long stated that Lake Lanier conditions have been proven deadly to hundreds of people. They constantly have to respond to rescue and recovery calls from this lake. One local diver, Buck Buchanan, famously said, “You reach out into the dark and you feel an arm or a leg and it doesn’t move. That’s creepy.”

WHO HAUNTS THE LAKE?

The hit true-crime podcast, Morbid, dedicated an episode to the lake, describing one based-on-real-events ghost story called “The Lady of the Lake.” It goes like this:

In 1958, Delia May Parker Young and her friend Susie Roberts were driving to a local roadhouse in Dawsonville. As they were crossing the Lake Lanier bridge, Susie lost control of the car and ran off the bridge. The women and the car disappeared at the bottom of the lake. It was 31 years before Susie and her car were found. A fisherman found the remains of a body about a year later. It was missing both hands and two toes and they couldn’t identify it as either Susie or Delia. Susie had been wearing a blue dress the night of the accident and, since the crash, multiple people have reported seeing a lost woman in a blue dress pacing around the area — and she’s missing her hands.

Multiple people have seen a shadow figure sitting on a raft with a pole to inch himself forward, back, side to side, (despite the lake’s extremely various floor depths) and a lantern to see. There are also reports of creepy sounds emerging from beneath the waters.

WHAT HAPPENS NOW THAT SO MANY ARE AWARE OF THIS?

While many swim, paddle, fish, and jet ski across the murky water, totally carefree, some locals won’t set even a toe in Lake Lanier. Others refuse to support the area’s economy because of its troublesome history and safety issues. One bold person has a Change.org petition to close Lake Lanier altogether, though that is unlikely to happen. As a popular vacation destination, the lake is extremely profitable and, because the government still owns it, it is unlikely that they will ever uncover all that is truly at its depths.

The Change.org petition reads, “Lake Lanier is a destination that is used for profit by many residents, businesses, and boaters. Keeping this lake open reflects the message that all these lives are worth economic growth.” A YouTube channel called Intrigued Mind put the lake’s sentiments pointedly well at the end of the first segment they produced on the topic: “Whether you believe in hauntings, giant catfish, bad omen, or curses, one thing is clear: you best be careful when you visit Lake Lanier.”

If you are one of Lake Lanier in North Georgia’s millions of visitors each year, beware of the dangers — both real and mythical — that lurk in and around its waters. Sources used in this article include Forsyth News, Newsweek, NPR, and AJC.