Like a sailboat deftly navigating unpredictable waters, the owners of Snapper Grabber’s Land & Sea gracefully react to unexpected shifts in their industry’s seascape. Pam and Kent Scott are acutely aware of the nuanced, unspoken needs of their customers, and they remain open-minded to suggestions that might at first seem farfetched. And then, like a swift, expert sailing team, they act, and that action, in response to customer demand and industry change, is what sets them apart. “We get a lot of feedback on how great it feels to be in our space. It is perfect for conversation,” says Pam. “You just have a nice, warm feeling and a very casual vibe when you sit here. You’ll see people buying wine and selecting cuts from the meat case, but people don’t mind; they like it.” For instance, Pam identified an unvoiced need for their seafood market clientele. “The main thing that you run into with seafood is that people don’t know how to cook it, and they are afraid to cook it,” she says. “If you have someone on board who is an expert at cooking seafood and they can share that knowledge, then people are not so afraid.” So the Scotts hired accomplished Chef Tim Hughes to bridge the gap between the seafood case and the plate. “Chef Tim will walk you through how to prepare and cook any protein in the shop. And we’ve developed a clientele based on that hands-on, one-on-one help with the seafood and recipes. We want people to cook it in the best way possible, because if it’s delicious, they’re going to come back,” says Pam with a laugh. “So, there’s a little bit of an ulterior motive!”

Similarly, Snapper Grabber’s seafood market customers used to repeatedly request that the Scotts expand their high-quality offerings to include meat. Pam and Kent were at first skeptical, but they let the echoed sentiment sink in. So, when the space next door to their seafood market unexpectedly became available, they decided to take the leap. The duo opened the doors to the adjoining butcher shop and cafe, which opened on June 15, and they took on two more experienced chefs in the process. “It just kind of morphed into more than we thought it was going to be,” says Pam. “It started out as seafood, but then it grew to be Snapper Grabber’s Land & Sea to represent all aspects of the protein world.”

Chef Tim Hughes has years of food knowledge and experience in the Birmingham restaurant industry, working under chefs like Chris Hastings of Hot and Hot Fish Club, among others. Image: Lee Harrelson Photographs Aside from their exceptionally fresh fish, Snapper Grabber’s “Sea” side of the business is famous not only for owner Kent Scott’s gumbo, which you can take home by the pint or the quart, but it’s also beloved for their shrimp, which is steamed on the premises in a matter of minutes with your choice of spices.

Kent Scott grew up in the seafood industry. In 1953, his father bought the River Fish Market in North Birmingham, the oldest seafood market in the city. “There’s a picture of it in the Library of Congress,” says Pam. Kent’s dad retired and left the couple the seafood market, and they ran it for seven more years before selling it in 1999. But it was only six short years before semi-retired Kent got restless sea legs and bumped into an old friend who happened to be selling a seafood market in Vestavia. Before they knew it, the Scotts were back in fighting form, slinging fish like the old days.

In the Snapper Grabber’s “Sea” side of the establishment, it’s bright, airy and pristine, with clean, white tile and rows of jewel-toned fish packed in ice. The Scotts pride themselves on their Gulf seafood, but they also carry fish from Hawaii, Alaska, all over — straight off the boat and overnighted to Vestavia on dry ice. “My husband is ridiculous about the freshness and the quality that comes through this door,” says Pam, with the fervor of someone hopelessly in love with a Grade A perfectionist. “If it is not 100% top-of-the-line, it does not go in our seafood case. So, what you take home is the very best. I mean, it couldn’t be any fresher, because he is so particular about it, and that’s just from years of being in the industry and knowing what good seafood is.”

Then, cross over into the Snapper Grabber’s “Land” side, where rustic brick and wood, warm lighting and an inviting seating area — all designed by Pam — exude a cozy, laid-back feel. An ever-expanding wall of wines curated by Chef Tim also features local goods and some of the Scotts’ favorite foodie finds. The butcher shop’s case is filled with beautiful cuts of pork, beef and chicken that are all top-shelf, often grass-fed, local and hormone- and antibiotic-free. There are oftentimes uncommon and interesting proteins on hand for the adventurous eater as well, such as fresh rabbit, wild boar ribs, venison and even ostrich steaks. “It’s not for the faint of heart when it comes to eating. It’s going to be a little more out-of-the-box, but the customers love it, because they’re all foodies,” says Pam. “The people who come to Chef Tim’s food classes, they really already know how to cook; they just love expanding their recipe box and learning tips from him.” 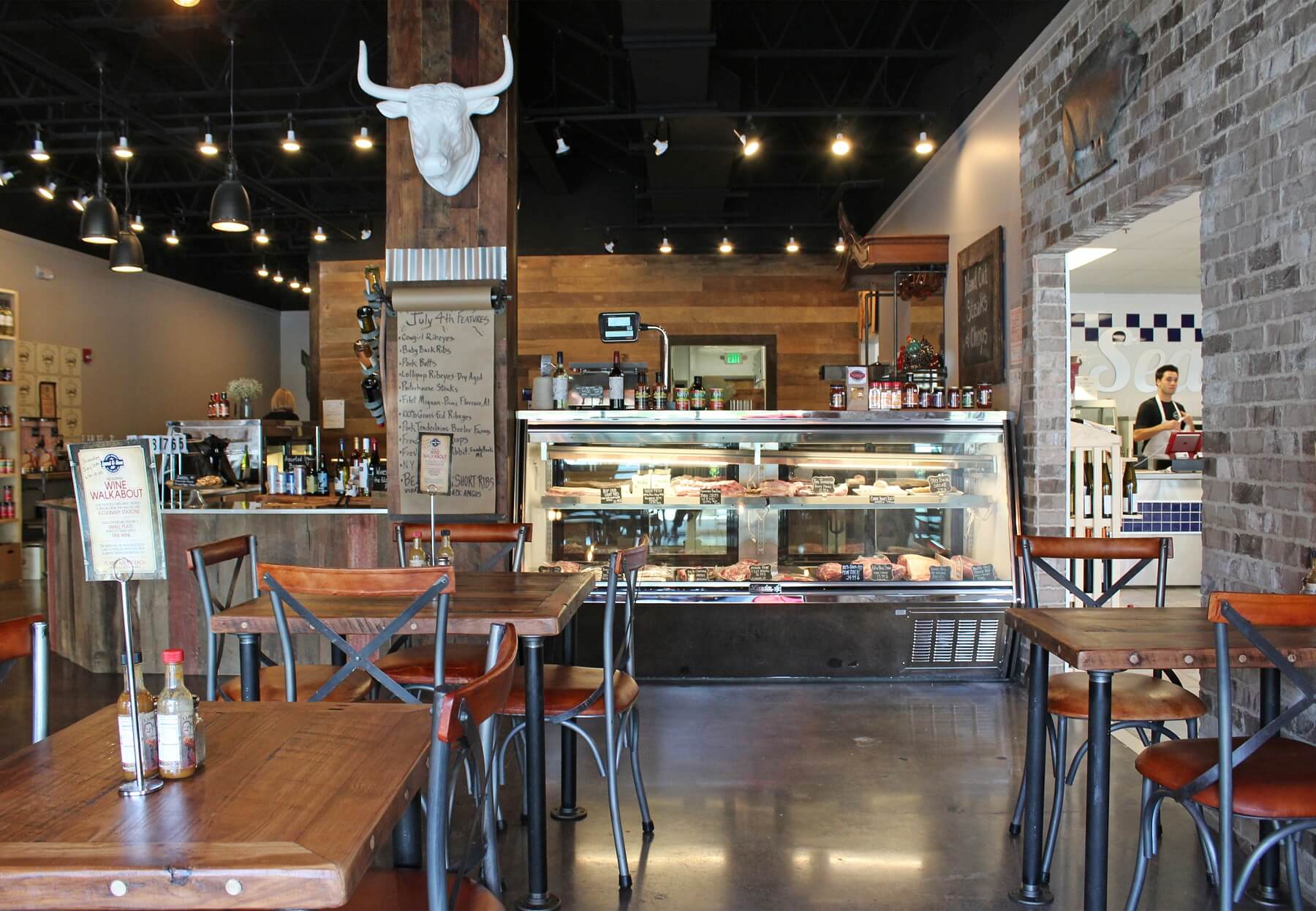 “A lot of thought, a lot of love and a lot of work went into it,” says Pam of the newly opened Snapper Grabber’s “Land” side. “My husband and I did a lot of hands-on work, but we’re happy with the response from the community.” Pam says that catering is most likely in their future, but for the time being, they are getting their bearings and focusing on the cooking classes and the new Wine Walkabout. They are also working on cooking up plans for football season. The wine business started with a very small collection, and since Chef Tim arrived, he’s curated a collection that complements the proteins and covers almost an entire wall! On the blackboard, the chefs’ featured pairings of choice are listed, along with specials for the day.

Chef Tim’s Land & Sea Cooking Classes are built around a three-course meal, which he demonstrates in the kitchen, sharing culinary tips and tricks. Guests observe, ask questions and take pictures. A local sommelier shares the wine pairing for that course, then guests dine while Chef Tim prepares to demonstrate the second course, and so on. “It’s very fun, casual and relaxed, and people just love it. We fill up our classes every single time,” says Pam. “And on July 20, we are having our first Wine Walkabout. It’ll be six culinary stations offering small plates, each one paired with a wine.” A sommelier and chefs will be on hand to elaborate on flavor profiles and pairings.

If you’re more in the mood for an everyday plate, the Land & Sea cafe has a humble menu of expertly prepared dishes. Chef Twillia (pronounced “Twyla”) Glover, a Birmingham native who spent the past 20 years as executive chef of two French restaurants in Providence, Rhode Island, anchors the cafe kitchen. Her classic French cooking makes her soups magnifique, and her plating skills produce dishes that are tres jolie. Be sure to try Chef Twillia’s soup du jour.

The Baja shrimp tacos — grilled shrimp on a soft grilled tortilla topped with lettuce, pico de gallo, queso fresco and lime crema — were so wildly popular on the Snapper Grabber’s Coastal Kitchen food truck that they had to include them on the menu. These tasty tacos were created by the eatery’s third chef and Pam’s brother, Chef Patrick McCown, who formerly worked for many years at Chez Lulu. And we can’t forget the most popular item. “Absolutely, hands-down, it’s the grilled grouper sandwich, ‘The Daily Hook.’ People love it,” says Pam, who is excited by her team’s culinary talent and their elevated epicurean influence on the seafood market-meets-butcher-shop-meets-cafe. “We have a multitalented team, and that is what makes us a little special — all of that knowledge. And we’re food people too! My husband has a culinary degree.” Chef Twillia Glover recently moved back to Birmingham from Providence, Rhode Island, to escape the cold and return to her roots. Pam waxes rhapsodic about her food, saying, “She makes beautiful food. When it comes out, it is so pretty.” Image: Lee Harrelson Photographs The very popular “Daily Hook” sandwich is a flat-top grilled grouper or red snapper (based on availability), served with lettuce and tomato on a warm buttered brioche bun, along with your choice of tartar or remoulade sauce. Image: Lee Harrelson Photographs Chef Patrick McCown worked at Chez Lulu for years before stepping into the world of food service in the healthcare sector. He came on board at Snapper Grabber’s around 2016, manning their Coastal Kitchen food truck until the butcher shop and cafe opened. Image: Lee Harrelson Photographs With a drumroll introduction, this is where Kent Scott’s legendary gumbo comes into play. “He’ll be in here, sometimes as early as 5 a.m., making the roux, and he won’t let anybody touch it but him,” says Pam of her husband, who’s been making his signature gumbo for around 30 years. “He puts hours of labor into it. We probably don’t make one penny off of it, because of all of the hours and ingredients he puts into it. It’s made with love, for sure, and it is some of the best gumbo you’ll find anywhere. People from New Orleans have come in and said, ‘This rivals any gumbo I’ve had in New Orleans.’ So, he’s sort of made a name for himself.” After tasting this savory and positively addictive low-country bowl of rich roux, tender veggies and melt-in-your-mouth morsels of seafood and sausage, we are thankful for his trademark perfectionism.

“That’s our goal: to make sure that everybody who walks through this door purchases something from us, takes it home and goes, ‘Wow. This is the best.’ — and that they feel loved and taken care of when they leave here,” says Pam, explaining that high quality and great service are what bring customers back. “If you’re giving that to your customers, they are going to spread the word, and word of mouth is everything. That’s where the rubber meets the road for us.” Get ready to dig into this unforgettable bowl — savor the flavor, because it may be the best gumbo you ever have!

When Chef Tim first came on board, he suggested that Pam start an email list for a newsletter. She thought, “Surely no one would want to share their personal email with us,” but in true Scott form, she listened and gave it a try. The next time she checked the clipboard, she was surprised to find pages upon pages of customer emails. She quickly set about building a newsletter platform, where she shared updates about incoming shipments, specials and upcoming events, and before she knew it, she had more than 1,500 subscribers. Despite their commitment to service and quality, she still seems a bit shocked and humbled by the outpouring of local love. “Our customers, especially the local Vestavia customers, are so supportive,” says Pam. “That’s my favorite thing about this place — the interaction and relationships with our customers. Without them, none of this would be possible. They are like family — they really are! It’s just a wonderful, wonderful community.”