After 46 years working as a nurse for TriStar, Star Sellers is retiring. Here, she reflects on a rewarding career at her home away from home.

Meet this month’s FACE of TriStar, Star Sellers. This nurse-turned-case manager retired in July after 45-and-a-half years at TriStar Centennial Medical Center. Star actually began working at the hospital when it was known as Park View Hospital, but her connection to the facility and HCA co-founder Dr. Thomas Frist Sr. began long before she became an employee. It all goes back to her grandmother (as she’ll explain) but Star also drove to work every day with her mother (a nurse, too) for 20 years and met her husband at TriStar Centennial Medical Center when his mother was a patient on her floor. We sat down with her to pick her brain about her career, her love for TriStar Centennial Medical Center and her future plans. But nobody tells Star’s story better than Star, so without further adieu, here’s our interview with the dear, witty and southern Star Sellers. Star Sellers is our newest FACE of TriStar.

Can you believe you worked at TriStar Centennial for almost 46 years?

In one sense of the word, it has been like the blink of an eye, but when I look back and think about all the things that have gone on and the things that I’ve experienced here, I can see why it took 45 years to do all that. Between the progression of healthcare, the changes we’ve had here and changes in my own life and family, it has been a long ride.

What’s one of the biggest changes you witnessed during your career?

Using computers for direct patient care and basically doing away with an old paper chart. We still have the facts. We still have one or two pieces of paper in that chart, and the chart still goes with the patients wherever they go, but most of the information on the patients is all electronic. My job has gone from being on my feet for 12 hours a day for 28 years to now being an 8- to 9-hour job. Also, a lot of time is spent charting at a computer. So, that’s a real big change. The biggest change Star has seen in her 46 years in nursing is the transition from paper charts to electronic files.

What are some of your best memories about working at TriStar Centennial?

The number of people that I’ve come in contact with through the years, both nurses, doctors and my patients. For most of my career, I’ve worked in oncology [cancer care], and for about 15 years I was the nurse manager on the oncology floor. It would be hard to work 12 hours a day, seven days in a row and not get close to your patients. It’s a catch-22 because being in oncology, you lose some, and you get to be part of the family, and that’s very difficult. I’ve left work many times and gone straight to a funeral home to pay my respects to one of my patients that passed away.

But I think my best memories are of my coworkers and the doctors that I’ve made friends with through the years, especially Dr. [Karl] VanDevender. I remember the day Dr. Frist, Sr., walked Dr. VanDevender on the floor back in 1982. He was Dr. Frist, Sr.’s protégé, and he eventually ended up taking over Dr. Frist, Sr.’s practice when Dr. Frist, Sr., retired. Dr. VanDevender and I have always been close buddies and friends. He always has a story tell. He’s also my doctor, and my husband told me the other day, “It’s about time to go see Dr. VanDevender,” and I said, “Is something wrong?” and he said, “No, I just need a story.” He was at my retirement reception. I knew he would be there, but I didn’t know they’d asked him to make a little speech, which he did, and he had to give me his hanky. 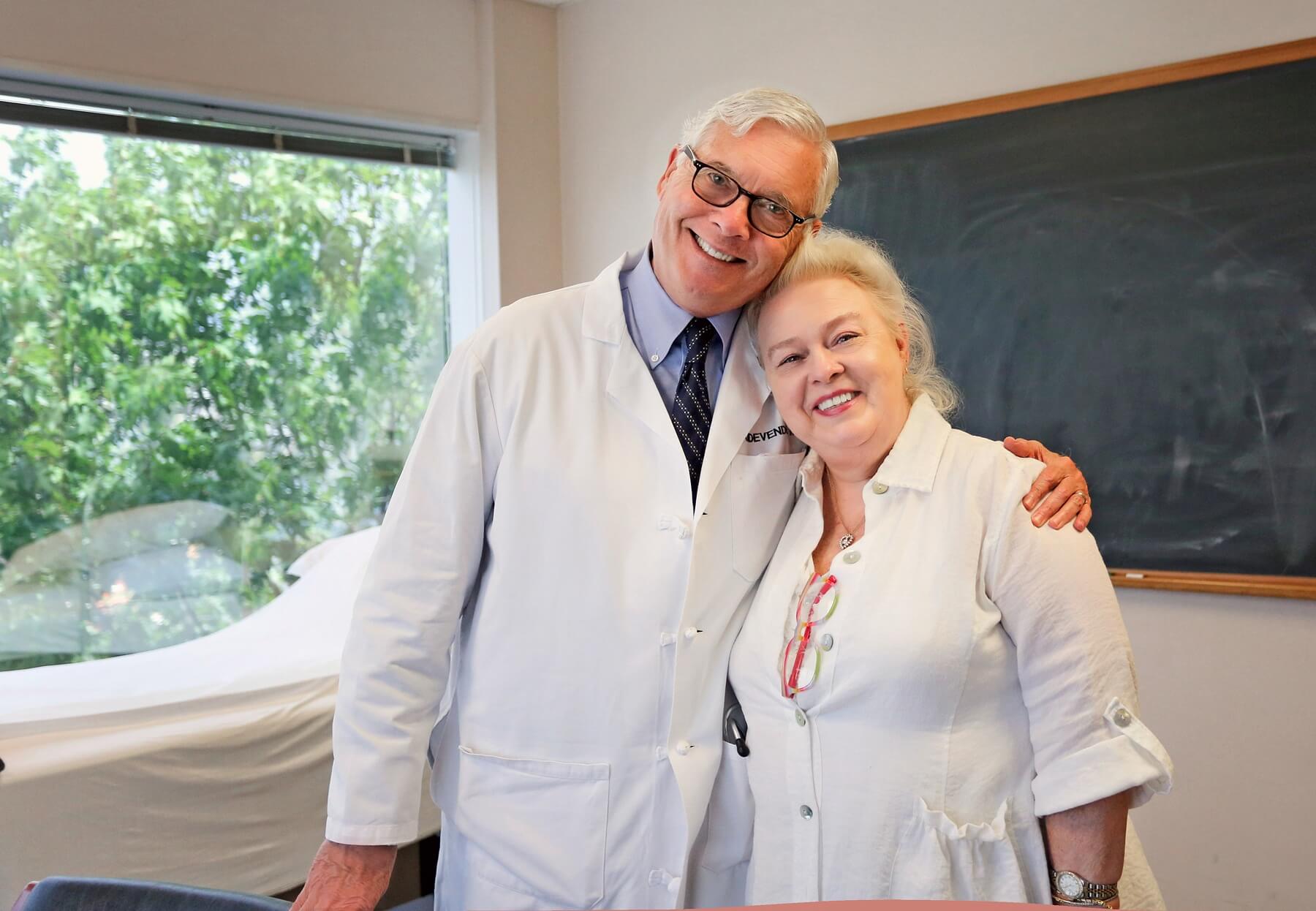 When did you first meet Dr. Frist?

I first met Dr. Frist, Sr., when I was about 11 years old. My grandmother was referred to his office. I’ll never forget standing out in the hallway talking to Dr. Frist, Sr.’s nurse, and I don’t know how the conversation started, but I told her that my grandmother was teaching me how to cook, and that I had cut up my first chicken. I said you couldn’t recognize a single piece of that chicken; maybe the legs you could, but you couldn’t even tell what the rest of the chicken was. I went on to explain to her what I’d done and how I cooked it. I didn’t know that Dr. Frist, Sr., was in his office just right across the hall listening to what I was saying. At the end of the story, he came out, and he was a real big man — he was 6’5” or so. He was way on up there, and I can remember him coming up to me, putting his arm around me, and patting me on the arm, and he said, “Poor old chicken.” He had listened to every word I’d said! But he never forgot me. Dr. Frist, Sr., always loved Park View because it was [HCA’s] first hospital, and he always came back, and it seemed like he always had an entourage of people with him. But, he never failed to look me up wherever I was working. He always came to see me, and he would always put his arm around me and tell them about the chicken story. He never forgot me. And, I even took care of him as a patient. He was in a car wreck one time and broke his neck. We were still Park View then. That was before the tower went up and we became TriStar Centennial. But, he had stories to tell like Dr. VanDevender. I think that’s partly where Dr. VanDevender gets that. Dr. Frist, Sr., always had a story to tell. Star stands next to a portrait of Dr. Frist, Sr., co-founder of HCA and the man she met for the first time as a little girl.

What made you want to become a nurse?

I had surgery on my eye when I was 6. The same procedure today is an outpatient procedure, but I had to be in the hospital for two weeks, and both eyes were patched. You are very impressionable as a child, but when you have your eyes bandaged, and you can’t see anything, you have to go on feelings, sounds and how people were treating you. I just decided then and there that that’s what I wanted to be — a nurse. And then, I started coming over here with my grandmother, who was admitted to Park Vista Convalescent Center as it was called then before it became a hospital. It was summer time when she was there, so I would stay with her and get to see what the nurses did. That kind of sealed it for me that this is where I wanted to come work. When it became Park View Hospital, one of the first people to have surgery there was my grandmother. I took care of my grandmother until I was 20 years old and dropped out of college to take care of her so she wouldn’t have to go to a nursing home. She passed away, and I went back to school and finished. But one of my nursing school instructors had gone to school with the director of nurses at Park View Hospital, and so Ms. Jones called Ms. Lambert and said, “I’ve got a student who wants to come work for you, and she already feels like it’s her home away from home.” Ms. Lambert said, “Well, send her up here.” This was all before I graduated from nursing school. I called and made an appointment to see Ms. Lambert, and she shoved an application form in my face and said, “Fill out the basic stuff here, and I want you to show up on September the 5th, and we will start your orientation.” So, I came on September 5, 1972, with no resume, and I’m leaving almost 46 years later, and I won’t need a resume when I leave. Thank you, Star, and enjoy your retirement. You’ve definitely earned it!

It will probably take me six months or longer to get through all the lunches I’ve already set up with my coworkers. But, I’m going to get to do things that I haven’t done in a long time. I want to have a garden again and make pickles and do all those sorts of things I used to do with my grandmother. I’m a very crafty, homey person, and I want to get back to needlepoint, cross-stitching and my crocheting. I haven’t actually taken a real vacation in about 10 years, so I’m planning to do some traveling. I have an 8-year-old nephew that plays every sport that there is, and I want to go see some of his ballgames. I’m a big football fan, and I want to go to some of my college games, which is the University of Alabama. Roll Tide!

Thank you, Star, for your tireless dedication. To learn more about the services offered by TriStar Health and to find a TriStar Health facility near you, visit tristarhealth.com.

Thank you to Leila Grossman of Grannis Photography for the fantastic photos of Star.