Imagine living in a house that was built shortly after the Revolutionary War ended, when the American flag had only 13 stars and the U.S. Constitution wasn’t yet a part of our government. This historic house in Fairmont, Georgia, built in 1785, caught our eye when it recently came on the market for almost $4 million. We were intrigued by its age, for one thing, but also because the owners have painstakingly restored the house with a goal of maintaining its authentic original state. Although there are a few circa-2017 amenities that have been added for modern living, you’ll likely notice the absence of a kitchen, though the home has been plumbed for one should the buyer wish to cook!

Rockdale Plantation, as it’s known to owners Kerry and Sue Hix and others, is considered to be one of the best examples of the Native American Cherokee Log Cabin-style of home. The original owner, George Washington Adair, was a Scotsman who married into the Cherokee tribe. He was a farmer and entrepreneur, and he ran a Traveler’s Rest on the property, which the Hixes explain is sort of a precursor to today’s Cracker Barrels and Holiday Inns, where visitors can stop in and grab a bite and a bed. The restored log cabin in northwest Georgia resembles its original state built in the late 1700s. Owner Kerry Hix researched porches of that era before building the ones on the property today, since the structure was falling apart when he bought it, and had no porches intact. The entry hall and many of the rooms include a surprising amount of color, which is historically accurate to the period. Rooms with the logs as part of the walls are particularly rustic. The Hix restoration does include electrical for lighting, even though that wasn’t available in the original time period.

“I don’t think there’s any other place in Georgia that has the power to take you back to that time in history like this place does,” says Jeff Bishop, head of the Georgia chapter of the Trail of Tears Association. The popular visitation site near Cartersville, Georgia, New Echota, teaches visitors about Cherokee life in a similar time period, but the buildings are reconstructed and not original to the site, he says.

Rockdale Plantation, on the other hand, is as close to its original state as possible and in its original location, thanks to the efforts of Kerry and Sue. “I loved this place the first time I ever saw it,” says Kerry, who has always been passionate about old houses — and particularly log cabins. “I’d never seen any quite like this one … the history and craftsmanship.” Over the years, he approached the previous owners about buying it, but they weren’t interested. It fell into complete disrepair, with rotting wood floors and walls falling down, and at one point it seemed like the home was destined to be lost forever. 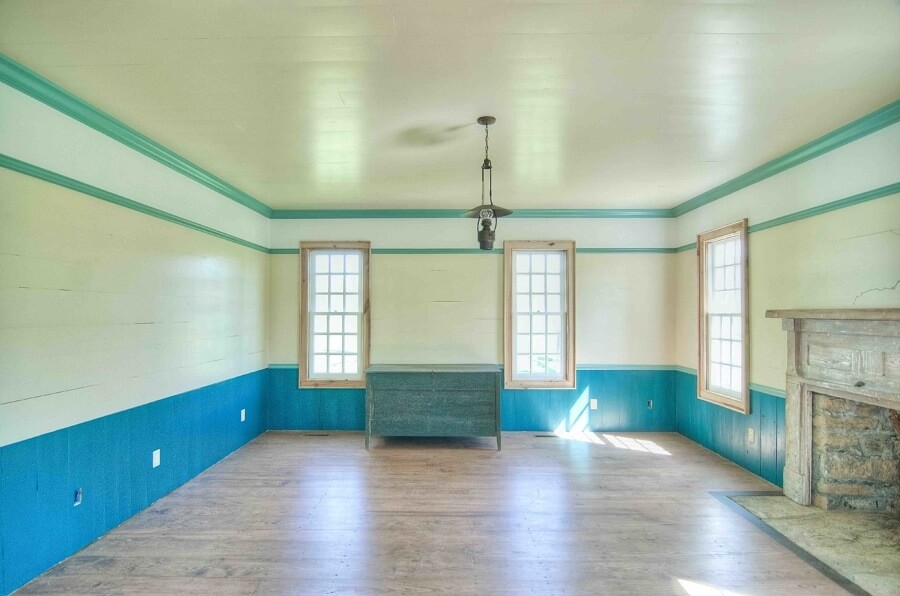 Another spacious room in the house The house has multiple fireplaces, all now safely repaired and working. 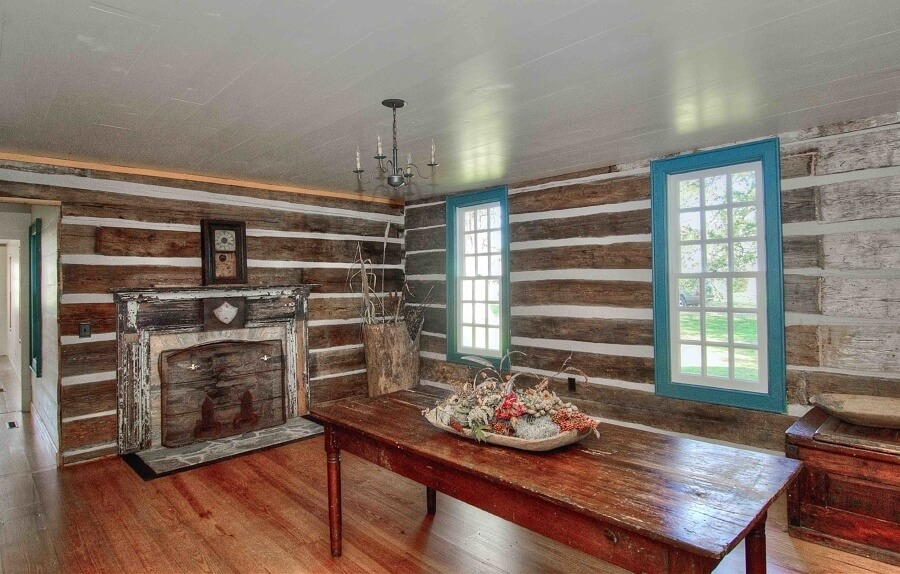 A dining room includes the cozy factor of log walls. 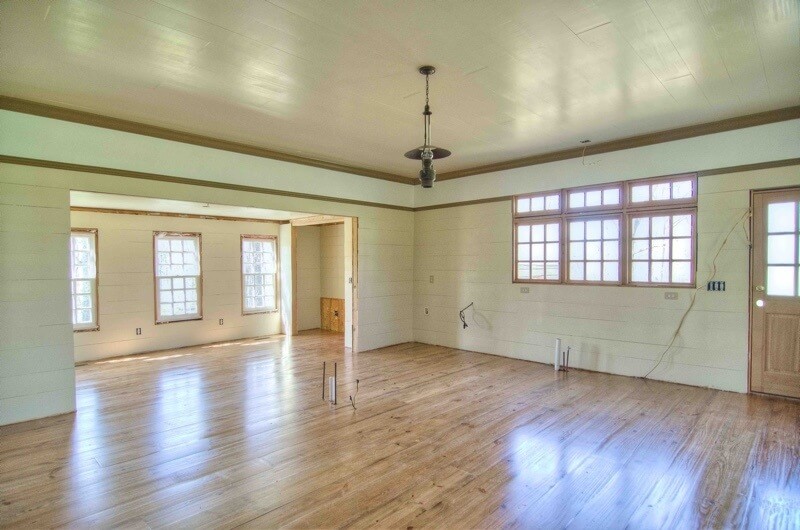 This expansive room is where a kitchen could be finished out — you can see where it has been plumbed and also offers electrical. Another room in the former home of a Scotsman who married into the Cherokee tribe.

When the previous owners had to sell the old property for financial reasons, the Hixes lined up with others to bid on it at auction, and eventually won. Kerry’s first job on the aging property: remove a tree that had fallen on the roof, destroying much of the top level. Next, they had a lot of painstaking work repairing the foundation and making the house fireproof. (A lot of historic houses are apparently lost to fire.) Kerry numbered all of the logs before dismantling them, then re-assembled them in their original location but with a better foundation. Along the way, they added foam insulation, cedar shakes on the roof and other building materials that will help the house stand for centuries.

Interestingly, the house is very colorful inside, but that also is historically accurate. “We took great pains to color-match the exact colors from back then,” says Kerry. Vivid yellow and teal show up on door frames and a fireplace, while another room is red. A rustic stone wall distinguishes this small bathroom — a concession to modernity added by the homeowners. 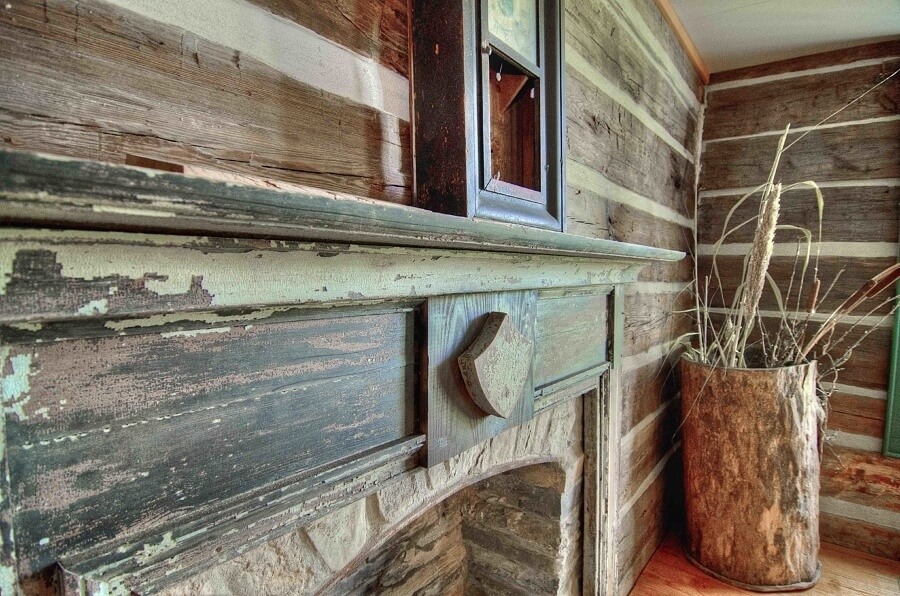 A detail of a fireplace mantel shows the patina of the old wood. 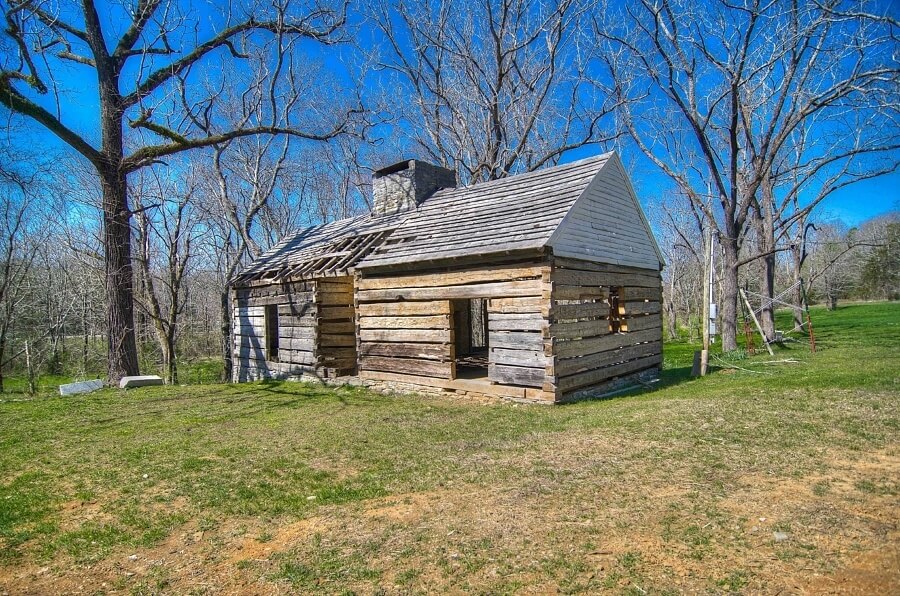 Several outbuildings are located on the property, as well.

The intense restoration does include some concessions to modern living, such as electricity, up-to-date plumbing, and central heating and air conditioning. “It was our heart to not only restore this historically significant property back to its true form, but to keep usability and efficiency in mind, as well,” says the couple.

All in all, the 6,000-square-foot home features six bedrooms, four-and-a-half bathrooms, plenty of land to explore and more character than you can shake a stick at. It truly is a one of a kind!

Again, for more details, it is on the market for almost $4 million!