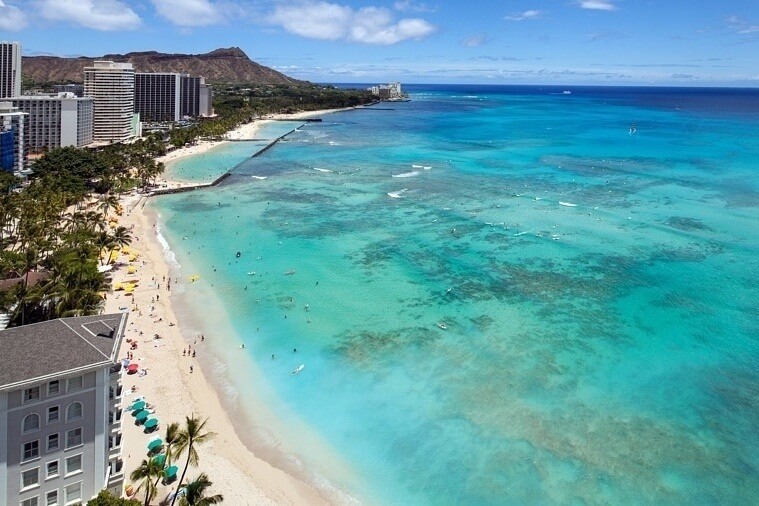 Paradise Found: How to Spend a Week in Oahu

If you're looking for an escape that is adventurous, relaxing and stunning at once, travel to Oahu. Here's where to stay, eat and explore.

“Ahhh, this is Paradise!” turned into “Uh … this is Paradise?” But time indoors gave us a chance to explore Hawaii’s rich culture, including its history as a former monarchy. And the temperate climate quickly returned, enticing us into the Pacific’s blue-green waters that feel like floating inside a jewel.

Hawaii is more than 4,000 miles from the American South. It’s a 5-hour-plus flight from North Carolina (where I live) to Los Angeles and another six airborne hours to Honolulu. The distance may be one reason why planning a first-time trip there can be a bit overwhelming. Early in my research, I didn’t realize island-hopping from Oahu to Maui to the Big Island means more time spent in airports or on a cruise, not quickie boat rides, and a longer vacation than we had.

No matter.  There is more on Oahu, one of Hawaii’s six major islands, than anyone could pack into a week of play. Here’s a guide for creating the getaway you’ve always wanted, minus plummeting tree branches.

The property has expanded since it opened as the Moana Hotel in 1901, though the majestic banyan tree in the hotel courtyard has thrived there since 1904. You’ve arrived at the right place when you spot the porte-cochere with dramatic columns and receive a purple orchid lei in welcome. Self-styled as “the first lady of Waikiki,” the Moana Surfrider was the first hotel built on the beach and opened in 1901.  It’s grown just a bit since then with multiple wings, pool, and spa. Image: Moana Surfrider The hotel is well positioned with Kalakaua Avenue on one side and the beach on the other. Image: Moana Surfrider Consider splurging on a room that takes in the ocean or gives you a framed view of Diamond Head State Monument.  (The mountainous Oahu landmark is officially the rim of a crater formed by a once-erupting volcano.) Relax at the spa, the open-air restaurant and bar shaded by the banyan tree, or the rocking chairs on the porch and second floor where you can watch city life on Kalakaua Avenue. That boulevard is touristy, sure, but still a great starting place for shopping and dinner, all in walking distance.

If you’d rather save on housing and don’t mind a hotel slightly inland, the Ala Moana Hotel is about two blocks from a peaceful beach and park. It’s an enjoyable half-hour walk to Waikiki; the trolley and TheBus are other easy options. Pop into the Ala Moana Center next to the hotel when your soul requires Dolce&Gabbana instead of nature.

First, to quiet that overwhelmed sensation: Concierges at major hotels can help you arrange anything from glass-bottomed submarine excursions among the coral reefs to day trips by plane to Hawaii Volcano National Park. But there’s plenty you can plan on your own.

Combine Oahu’s coastline, lush vegetation and birds worthy of a double take, and you have a memorable hike. Many travelers make the pilgrimage up Diamond Head with views of the city, mountains and shore from Koko Head to Waianae. The hike is 1.6 miles round-trip.

If you go on Saturday morning, start the day at nearby KCC Farmers Market to sample treats like macadamia nut soft serve for breakfast followed by kalua pork on rice because it’s vacation and you can. Other tasty items at this expansive market include huge, grilled deep sea shrimp, takoyaki (a Japanese street food with octopus) and, of course, Hawaii-grown Kona coffee.

Diamond Head is a classic Oahu trek. Just as spectacular is the Makapuu Lighthouse Trail along Kalanianaole Highway. The paved one-mile trail opens at the top to, well, this: The view from the pinnacle of Makapuu Lighthouse Trail, one of our favorite places on Oahu | Image: Andrea Cooper That’s Oahu’s windward coast, including Manana and Kaohikaipu Islands.  Come from December through May, and you might be rewarded after this moderate hike with the sight of humpback whales along the horizon. (Spend more quality time with the mammals on an eco-tour from Wild Side Specialty Tours that includes whale watching, swimming with wild dolphins and snorkeling among sea turtles.)

Even if you don’t glimpse whales here, the snorkeling is unforgettable at Hanauma Bay Nature Preserve, about 25 minutes from Honolulu. This beach, embraced by mountains on either side, is so beautiful you may hardly believe you’re seeing and not imagining it. Rent a mask, fins and snorkel on site, swim just steps from shore, place your face in the water and start the show. That creature zipping past you may be the humuhumunukunukuapua‘a, Hawaii’s state fish. The word is out about Hanauma Bay, so get there around 7:30 a.m. to nab a parking space, or take a shuttle from Waikiki. Outdoor adventures are a strong part of Oahu’s allure, but don’t miss the island’s historic and cultural destinations, which draw upon a fascinating history and mix of cultures. Pearl Harbor: World War II Valor in the Pacific National Monument is an essential visit to understand the attack that drew our nation into war. You’ll begin with a film, followed by a boat tour that takes visitors around the USS Arizona Memorial with a well-versed guide. The USS Bowfin Submarine Museum & Park, the Battleship Missouri Memorial and Pearl Harbor Aviation Museum are part of the complex.

The Iolani Palace was home to the Hawaiian monarchy before its overthrow in 1893 by a mix of American businessmen and Hawaiian Kingdom subjects. Spring for the audiotape tour of the only once-royal palace in the United States. Especially poignant is the imprisonment room, where Queen Liliuokalani sewed a patchwork quilt while being held captive, with embroidered lines that told her life story.

Luau, or celebratory feasts, are historic as well. The festive gatherings date to ancient times. We worried luaus today might be a little (or a lot) hokey, but I recommend Paradise Cove luau for its music and dancing, demos of traditional Hawaiian skills, good food and glorious sunset on the beach. Watch for dances from the Polynesian Islands, and make time to talk with performers for some surprising insights. One demonstrated how to scramble up a coconut tree and told us he learned the skill when he was only 6 years old.

No one ever described Hawaii as a budget destination, but several free pastimes stand out. Survey the amazing landscape at the lookout at Nu’uanu Pali, five miles from downtown Oahu. (Check the park’s status before you go, as it may be closed through the summer following a landslide on Pali Highway.) Enthusiastic dancers perform three nights a week on Kuhio Beach Hula Mound and reveal hula as a graceful form of storytelling. On Friday nights, the free fireworks behind Hilton Hawaiian Village on Waikiki Beach are brief, but it’s hard to beat sparkling colors over the water. The USS Arizona Memorial is currently closed to visitors because of safety issues, but a boat tour takes visitors around it. Image: Pearl Harbor Call it high tech: King Kalakaua installed electric lighting and a telephone at the Iolani Palace before the White House had those conveniences. Image: Iolani Palace Remember those high waves on Oahu’s North Shore? They top out at 30 feet through the winter, attracting the island’s best surfers, and grow gentler in summer, appealing to beginners on the boards. It takes an hour or less to drive from Honolulu to laid-back Haleiwa for breakfast. Then see if the Hawaiian green sea turtles are peeking through the waves or sunning themselves on Laniakea Beach, and marvel at the surfers in Waimea Bay.

Perhaps less known but well worth a stop is Waimea Valley, a botanical garden resplendent with tropical and subtropical plants, and a 45-foot waterfall. It’s a spiritual place, the woman who sold us our tickets told us, and we quickly saw why.

From there, it’s a quick drive to the Polynesian Cultural Center. Spend the afternoon at its six villages for a family-friendly introduction to the music, dance and cultures of Samoa, Tonga, Tahiti, Fiji, Hawaii and Aotearoa (New Zealand).  The center also presents a well-known luau and evening show. Most performers are university students from the island nations who are eager to chat with guests about their homelands.

For even more on Hawaii’s history, adults will enjoy The Bishop Museum back in Honolulu, with its remarkable collection of artifacts. If you love art and design, book a trip through the Honolulu Museum of Art to Shangri La, Doris Duke’s seaside mansion designed in the Islamic tradition, now a museum of Islamic art, culture and design. Your Instagram will rejoice. Great food is plentiful on Oahu. The picturesque tile-and-stone architecture at the Honolulu Museum of Art extends to its café, where you can dine on grilled piadina while admiring sculptures by Jun Kaneko.

Try Moku Kitchen for a fun night with live music in the up-and-coming SALT area. The restaurant bills itself as an authentic taste of Hawaii with locally sourced ingredients. We were convinced from the Hapa Poke, a playful take on nachos featuring ahi tuna, shoyu, Maui sweet onion, ogo (seaweed) and freshly made taro chips. After lunch, check out the street murals in the nearby Kakaako neighborhood.

Senia generated buzz nationally even before it opened. It delivers an inventive culinary journey with gorgeous small plates on a regularly changing menu. Choose one of the succulent meat dishes — smoked Maui venison tartare, roasted bone marrow, confit duck leg — or opt for the lighter hamachi, a type of yellowtail fish. Even the charred cabbage is revelatory, accented with green goddess emulsion and tiny orbs of buttermilk gel. When the meal starts like this, you know it’s gonna be good. Image: Moku Kitchen/Instagram We’d be happy to linger over almost anything from Senia chefs Chris Kajioka and Anthony Rush. Image: Senia/Instagram

Woman does not thrive by gourmet eats alone. Helena’s Hawaiian Food is Oahu’s version of a Southern diner, complete with short ribs pipikaula style, macaroni salad and luau squid. Or take a break from shopping at the Ala Moana Center to discover okonomiyaki, a savory Japanese pancake, and other dishes at the Shirokiya Japan Village Walk .

Driving up the coast after your Makapuu Lighthouse Trail climb? Stop at Dave’s Hawaiian Ice Cream for honeydew mochi, ube (purple yam) and other flavors that aren’t at your local grocer. Across the island in Haleiwa, Cafe Haleiwa serves up Hawaiian sweet bread French toast and some of the best granola we’ve tasted in a happy setting with an undercurrent of hippie. The North Shore is also famous for its shrimp trucks dotting the highway.

All those recommendations will get you started and show you why your first trip to Oahu might not be your last!