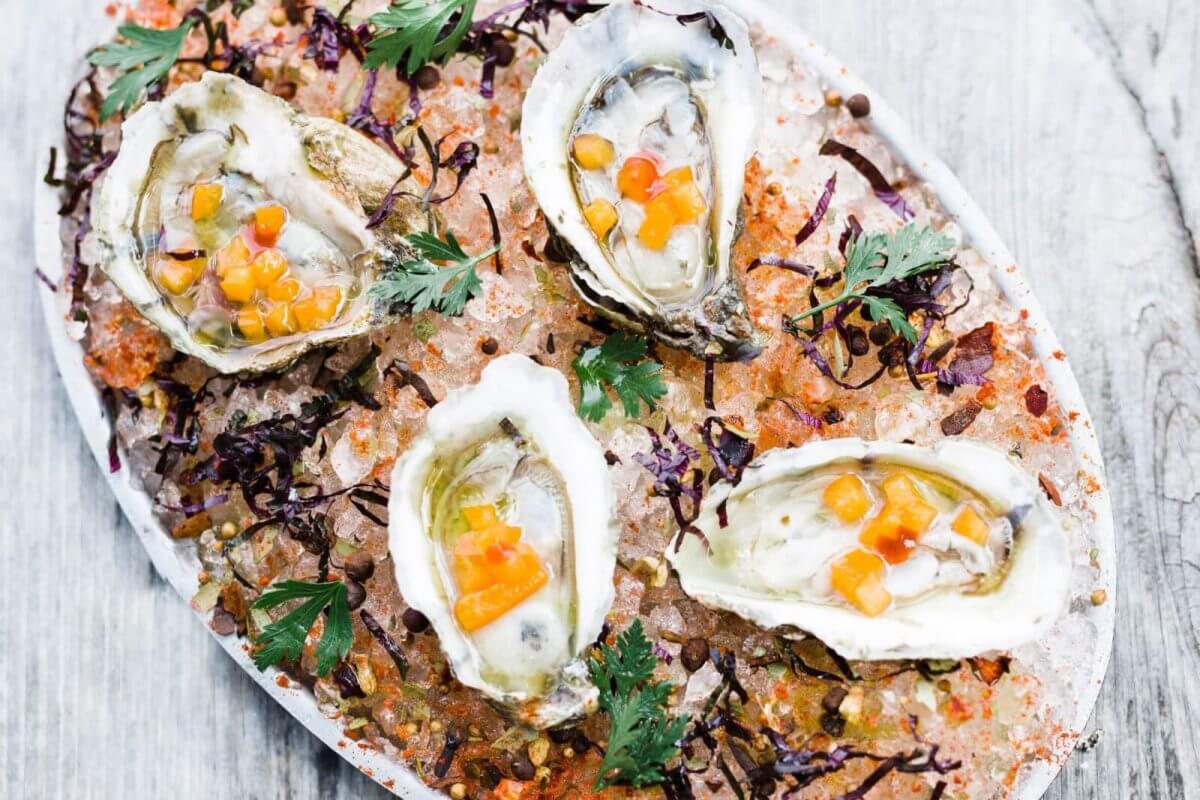 Explore the North Carolina Oyster Trail — a celebration of the region's oyster farms, oyster bars, gourmet markets, and more — and take a closer look at 10 must-visit stops along the way!

North Carolina’s farmed oysters, celebrated on the oyster trail, are infused with freshness and salinity, and offer myriad environmental and economic benefits. Jane Harrison, a coastal economics specialist with the North Carolina Sea Grant, explains that oysters filter water, improve water quality, and provide a food supply for humans and other animals. And, because wild oyster reefs protect the coastline from erosion and are habitats for spawning fish and crustaceans, the increased popularity of farmed oysters allows wild oyster reefs to benefit from protection and restoration. Oyster farming also economically sustains coastal fishing communities that currently face a diminished supply of wild seafood to harvest.

Sounds like an absolute win-win to us! While the North Carolina Oyster Trail has a wide variety of stops along the way, we’re focusing on our favorite travel activity: eating. Below, 10 North Carolina chefs and restaurateurs share their unique oyster preparations, from fried to raw to nestled at the bottom of a shooter. Perspective about the trail’s importance from North Carolina chefs and sommeliers “filters” throughout! Working oyster farms like this one are found along the NC Oyster Trail. Image: Amy Beth Wright

Blue Water Grill seeks out “as many local farm-raised oysters as we can find,” says sous chef Tim Gard, who sources from Savage Inlet in Nags Head, Devil Shoals on Ocracoke Island, and Slash Creek Oyster Company, Hatteras Salts, and Sticky Bottom Oyster Co. on Hatteras Island. A colorful oyster shooter is a house signature, the oyster layered with lemon horseradish sauce, cucumber puree, vodka, and Bloody Mary mix. Tim describes the trail as a powerful resource. “If we can show our customers how important this is and what a treat it is, hopefully we can spread that enthusiasm to other areas and other industries, improving not only the quality of our product, but the local economy as well.” Ann Warner has owned Howard’s Pub, a seasonal restaurant on Ocracoke Island, for 32 years. She describes Ocracoke Pamlico Sound oysters as “plump, juicy, salty, and delectable.” Howard’s Pub serves oysters raw and steamed on the half shell, and a popular Oysters Rockefeller features creamy spinach, bacon, and melted cheese. At the bar, an oyster shooter is prepared with chilled vodka or cold draft beer, hot sauces, and a little spice and comes in a souvenir glass. Ann notes that oysters contribute positively to “our economy, health, and wellbeing.” Next time you’re in Ocracoke Island, NC, stop into Howard’s Pub for some fresh oysters on the half shell. Image: Howard’s Pub

Spurgeon Stowe, owner and oyster farmer at Slash Creek Oyster Company on Cape Hatteras, often hand delivers oysters 60 miles north to JK’s, an Outer Banks mainstay known for unparalleled 30-day house-aged steaks. JK’s sommelier, Dennis Perry, recommends a white wine that has body, like a barrel-aged, buttery chardonnay, to complement the Baked Oysters Rockefeller, which features spinach walnut pesto and Parmesan cheese. For raw oysters, he suggests that any dry champagne is a wonderful complement. Wines from Chablis as well as Muscadet, which Dennis describes as “dry, high acid, lean, and austere,” cut through the salinity, achieving the same effect as a squeeze of lemon.

Spurgeon or his wife and business partner, Katherine McGlade, will take visitors (call ahead to book) onto the water for a peek into the submerged white boxes sheltering thousands of burgeoning oyster seeds, and the floating bags incubating growing oysters destined for the premium half-shell market. On its raw oyster menu, PinPoint features Tarheel Tiderunners and Soundside Salts from Stump Sound on Topsail Island, and Dukes from N. SEA. Oyster Co., on the Topsail Sound. All are served with crackers, cocktail sauce, and an apple and ginger mignonette. An NC Oysters Steamed Buns appetizer features buttermilk fried oysters with local lettuces, beet and carrot slaw, and creamy sunchoke vinaigrette. And, pork belly and pepper jelly oysters are baked with lemon cornbread crumbs, white wine, and Parmesan. The raw oyster menu at PinPoint is a must-try for oyster lovers! Image: PinPoint

Defined by his commitment to fresh, local seafood, Chef Ricky Moore sources oysters from Ryan Bethea’s Oysters Carolina, on Harker’s Island in the Outer Banks. Ryan is quoted within North Carolina’s Oyster Blueprint, the long-term statewide vision behind the Oyster Trail, as saying, “People just need to be educated that they’re safe,” noting oyster farming has no environmental detriments.

Chef Ricky’s shucked oysters are from Mattamuskeet Seafoods, discovered on one of Moore’s many journeys to the coast in search of briny, plump oysters in a nicely framed shell, with clear “oyster liquor.” He recommends Saltbox‘s Oysters Piccatta with Prosecco, and appreciates the trail’s focus on educating consumers about why it’s important to buy and eat local oysters, noting that awareness “kickstarts consumer confidence.” Saltbox Seafood Joint is a humble establishment with a menu that is anything but. Image: Baxter Miller The presentation is just as decadent as the main feature. Image: Baxter Miller

Seabird, helmed by James Beard Foundation-nominated chef Dean Neff, is a restaurant and oyster bar in a historic building near the Wilmington Riverwalk. Raw oysters include Dukes from N. Sea Oyster Co., a high-salinity oyster that Dean describes as “impossibly more perfect in January and February, as the gills become green,” and a medium-low salinity oyster from Seabirdie Holdfast Oyster Company cultivated in Stones Bay in Sneads Ferry, North Carolina. Permuda Petites from Three Little Spats Oyster Company (whose oystering roots date from the 1800s) are farmed in Stump Sound, between Topsail Island and Permuda Island.

Chef Dean describes these as having “super balanced buttery salinity,” with tasting notes of seagrass, sea bean, iron, and umami. In addition to lemon, hot sauce, champagne mignonette, and saltines, a house sambal cocktail sauce is made with locally grown aji dulce, cayenne, padron, biquinho, or Trinidad Perfume peppers, garlic, ginger, and lemongrass. A Muscadet like Oysterman, from France’s Loire Valley, is recommended. Oyster farming “not only brings a new and sustainable industry,” says Dean, “but also brings awareness to water quality issues and the importance of preserving our pristine coastline.” Oysters in their natural state at Seabird come with a variety of accoutrements for a full flavor experience. Image: Andrew Sherman RELATED: Worth the Drive: New Restaurants in the South

Shuckin’ Shack owners Jason and Beverly Simas source local oysters broadly, from Three Little Spats Oyster Company, Ghost Fleet Oyster Company in Hampstead, Middle Sound Mariculture in Wilmington, and many others. They look for “steamers,” which have roughly a three-inch shell and plump meat, and a 2.5-inch oyster for the raw menu with clear and plentiful brine, a shell with a “nice deep cup,” and medium-high salinity.

Chargrilled oysters are placed on an open-flame grill with added melted garlic butter, chopped cooked bacon, jalapeno cheddar or Parmesan, and fresh scallions. Pair them with a New Zealand Sauvignon Blanc that is “bright with vivid aroma and zesty acidity.” Shuckin’ Shack is on the James Beard Foundation’s Smart Catch Committed List, and partners with the Shellfish Growers Climate Coalition. The Simas recycle all shells and appreciate the trail as a means of informing the public about how invaluable oyster farming is to local waters. Owner, brewer, and “head oyster shucker” Jud Watkins grew up oystering with his father and grandfather, and as a result, Wrightsville Beach Brewery is committed to sustainability and environmental protection. In addition to po’boy sandwiches, pizza, and a Caprese salad, the brewery features Shell’em Seafood’s wild harvest singles in a special “Redneck Rockafella” dish with house-made pimento cheese, North Carolina collards, and bacon. Fried Oyster Bites are served over kimchi-spiced collards; both pair well with a medium-bodied beer like the brewery’s Airlie Amber Ale or Coastal Honey Lager.