Lynne Tolley’s family history is “spirited” in more ways than one. The great-grandniece of distiller Jack Daniel (who she jokes is over a century old but still manages to be in the bars every night), Lynne is well-versed in the world of Tennessee whiskey. Though technically retired, she has been employed by the renowned distillery for more than 40 years and still serves as a premier whiskey taster, consultant and brand ambassador. With multiple Jack Daniel’s-themed whiskey cookbooks under her belt, she continues the family legacy that shaped Lynchburg, TN. Please welcome our newest FACE of the South, Lynne Tolley. 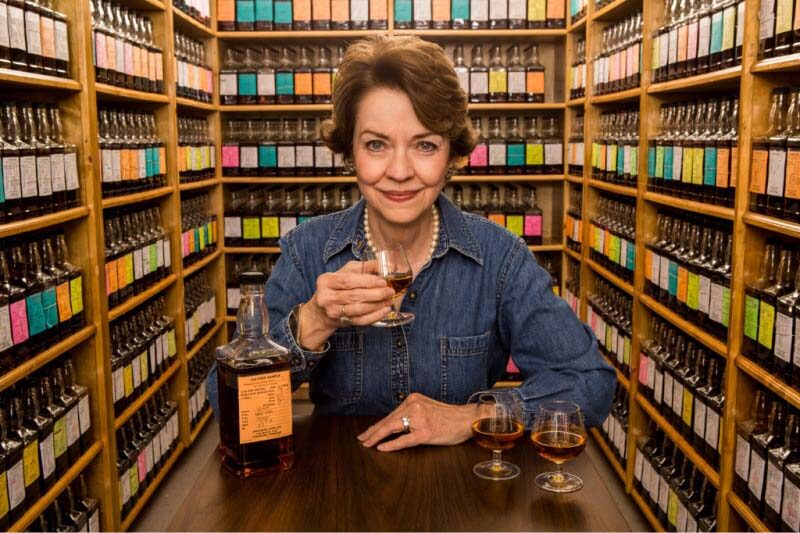 “I wish I knew exactly when I became a taster, but it was at least 30 years ago,” says Lynne. “I went to the guys and said, ‘I want to be a taster,’ and they said, ‘Well, we don’t know if you’re any good or not.’ I told them, ‘Of course I’m good. I’ve inherited Jack Daniel’s taste buds, I’m sure.’ They made me taste for a year before they made me an official taster.”

How did Jack Daniel Distillery become so successful?

Jack Daniel never married; he married his work. He was an old bachelor, but he was one of 13 children. So, lots of brothers and sisters. He was my great-grandmother’s brother. In the 1880s, there were 15 registered distilleries in the Lynchburg-Moore County area. The area had an abundance of the things you would need to make whiskey: wood, really good water, and grains (corn, mainly). The water was especially good. As the years went on, people dropped out of the whiskey business, but Jack Daniel was quite a businessman. I think that’s one of the reasons he never married; he was devoting himself to building the distillery and the success of it — though Uncle Jack kept everything, so we know he had girlfriends! We have letters that he wrote to some ladies and letters that they wrote him back. We think one of them may have broken his heart because her parents didn’t want her marrying a distiller. It was the turn of the century, and they were pretty straight-laced back in those days. All of this is speculation, but it may have been why he devoted himself to his distillery. I think it’s sort of romantic. What led you to follow in “Uncle Jack’s” footsteps?

My brother and I grew up in Lynchburg, and we both said we’d never work for the distillery. We just weren’t that interested. I went to the University of Georgia and studied food and nutrition, and after I finished school, I had various jobs — none that I liked. Our marketing and sales offices for the distillery were in Nashville at the time, and I went by and said, “Would you all be interested in hiring a nutritionist for any reason?” They said no, but they put me in sort of a PR position. I handled VIP guests and distributors and retailers who came in from around the world and the United States. I would pick them up at the airport and take them to Lynchburg, and we’d do the whole distillery tour — eating at Miss Mary Bobo’s Restaurant and all of that.

Miss Mary Bobo died in 1983, and the distillery bought the boarding house because it had been so much a part of the community for so long. It was also a great place to bring visitors, and they were bringing people down to tour the facility. Because I had a food background, they asked me to run it. I’d eaten there my whole life growing up, so I was pleased to do that and immediately rehired the cooks that she’d had. That’s how it all started. At the same time that they gave me Miss Mary Bobo’s to run, they made me a brand ambassador. I went around the world — 34 countries and almost every state — talking about Uncle Jack’s famous product. It’s a perfect job for me. Of her job, Lynne tells us, “I love talking about Lynchburg and Tennessee and this product that’s become the world’s largest selling whiskey. It’s so unbelievable to me that we make it in little old Lynchburg.”

Do you find that whiskey tasting is a male-dominated field?

You would think that, but a few years ago, I discovered it’s about 50/50. I feel women are the best tasters because our senses of taste and smell are sharper. You have to have a good nose to be able to be a good taster. There are some good male tasters, of course, but I’ve always thought women made the best whiskey tasters.

Do you have any funny Jack Daniel’s stories?

I was talking to a group of people one day and telling them about the benefits of cooking with Jack Daniel’s whiskey. I said, “If you’re ever cooking and you run out of vanilla, you can substitute Jack Daniel’s. It will work out beautifully in most of the recipes.” This cute older man said, “Honey, I’m much more likely to run out of Jack Daniel’s than I am vanilla.” We fell out laughing.

What’s an intriguing piece of Jack Daniel’s history that not everyone might know?

Uncle Jack lived in a beautiful old Victorian house in Lynchburg that had porches that went all the way around — it was a pretty old house. On the top level, there was a ballroom. Supposedly, there were red velvet curtains, which were all the rage, and there was a baby grand piano. He’s the only person in Lynchburg who’s ever had a ballroom before or since. I think it shows that he loved to entertain, and he was very hospitable.

At the turn of the century, ladies “didn’t drink.” But the little ladies in town would send word up to Uncle Jack at the distillery that they were feeling poorly, and he would discreetly see that they got a little “medicine.” “I love the fact that there’s only a handful of us who taste our premium whiskey single barrels,” says Lynne. “I’m one of that handful — I turned out to be a pretty darn good taster.”

Someone told me, “Don’t be in a hurry to get married.” So, I was 54 when I got married. I believed them! I was traveling all over the world for the distillery, and I loved that. I thought, Well, I’ll get married one of these days, or maybe I’ll be like Jack Daniel, and I won’t get married. I’ll be a bachelorette. But when I was 54, I met this irresistible man, and I told him he would be my first and last husband. He said, “Okay.” His name is Tom, and I couldn’t live without Tom Brown.

The anticipation of trying a new recipe or cocktail. Cooking is my hobby, and I just adore it, especially in my retirement. All I do is cook and eat! I couldn’t live without my cozy little house here in Lynchburg. I pick flowers a couple of times a week so I can have fresh flowers from my yard. I love that. The third thing I couldn’t live without is trying out new restaurants. When something opens in Nashville, I can’t wait to get there. The last one I went to was The Optimist. I loved it!

Thank you, Lynne, for sharing some of your family’s history. All images courtesy of Jack Daniel Distillery.