Inez Pierre was at a New Orleans urgent care last November after her daughter sprained an ankle, and it was then that she and her husband, Rene, happened to look up at the television. The news was on, and they caught an interview with Megan Boudreaux. Megan was telling a reporter about the movement she accidentally created to save Mardi Gras: the idea that people could create “house floats,” an idea that came to be known as Krewe of House Floats. “My husband looked at me and said, ‘That’s it. We’re gonna be alright; we’re gonna do house floats!'” Inez remembers. The couple has been working non-stop ever since. This year, instead of floats being built for Mardi Gras parades, houses have been turned into stationary floats. The movement, called Krewe of House Floats, has kept many New Orleans artists employed during the pandemic. This home has a decidedly tropical theme. The Krewe of House Floats map is filled with homes that are getting into the spirit of Mardi Gras.

The Pierres own Crescent City Artists. Both born and raised in New Orleans, they have been building Mardi Gras floats for three decades and three years ago went out on their own. It’s normally a lucrative business that keeps them busy year-round, but COVID shut just about everything in the creative arts industry down. “We were struggling to try to figure out how to pay the bills,” Inez says. “We were no different from everyone else. It’s just been so frustrating after all the years of grinding and finally putting the work into our own business to lose so much overnight … it was really hard.”

The last year has been particularly rough for the city’s artists, and when the mayor said Mardi Gras was canceled — that there would be no parades — many were left wondering how they would make it through a canceled carnival season. So was Megan. “The mayor announced that parades would not be permitted and events were canceled,” she says. “I was hanging out on Twitter and made a comment that I’ll decorate my house and throw things at my neighbor.” People took her attempt at humor seriously, and last November, she figured she’d throw something simple together. “I thought it would be small and informal. I started the Facebook group later that day, and there was so much interest in having something to do — even if it was staying home and decorating — that it just took off and it had thousands of people on the Facebook page within a few days.”

The Krewe House of Floats Facebook page (krewe is a term for a social organization that puts on a Mardi Gras parade or ball) now has more than 11,000 followers and is filled with photos of fabulously decorated homes across the city. There’s the porch with a nod to “The Great British Baking Show,” the yard with a very lifelike shark for Sharknado and a “Little Shop of 2020 Horrors” house (complete with a nod to murder hornets and the toilet paper shortage!). There’s even an entire neighborhood paying homage to all the TV we’ve all watched in quarantine. All the homes in the Irish Channel neighborhood are decorated with the “Channel Surf” theme, including a “Schitt’s Street” house, a “Hallmark Channel Countdown to Christmas” theme and a “Return to The Office 2021” house. “It’s pretty overwhelming to see so many people participating. I’m getting a lot of ‘please run for mayor or city council,’” Megan laughs. We love this Shark Week-theme home. This “Little Shop of 2020 Horrors”-themed house has all of the horrors of last year — all the way down to the murder hornets! This “Schitt’s Streets” house, obviously a play on the wildly popular “Schitt’s Creek” series, nails it!

Megan has always loved Mardi Gras. She moved to the city 17 years ago and actually lived along one of the parade routes in a house on St. Charles Avenue. “I got a crash course in Mardi Gras. How can you not love when a marching band literally marches through your front yard?” she says. “It’s such a community experience, and even though we knew it wouldn’t be safe this year to have the parades and the people here, it was sad.”

In fact, she says before the mayor’s official announcement, many were concerned the celebration might not be called off and the city would play host to a super-spreader event. “Honestly, it was a relief because even in November, this pandemic clearly was not going to be under control, and the idea of people coming into our city and being on the parade route — there’s no way to socially distance on a parade route — that was so nerve-racking to think we would do it,” Megan says. “I was planning to stay home.”

That’s why the House Parade seemed like the perfect compromise. “Early on, we said it’s Mardi Gras for houses so you don’t get sick. We’re calling it the parade-at-home order. The real core of the idea is you decorate your house; there’s a map so you can drive around and look at decorated houses just the way you would Christmas lights in December,” she says. But she never expected such a big response. In January, people across The Big Easy started decorating, and more than 3,000 submitted their addresses to be included on the official 2021 House Floats map. People from across the country and even around the world joined in the fun decorating their homes as well.

With so much attention on the move to save Mardi Gras, Megan encouraged people in New Orleans to use local artists when putting together their designs. “I’ve had multiple artists and businesses approach me and say they didn’t know how they were going to get through the year, and with this, there’s been so much interest,” she explains. “People have hired artists and already booked them to do this again next year. It really buoyed the Mardi Gras economy even more than we anticipated.”

RELATED: The Inside of This Traditional New Orleans Home is Not What You’d Expect 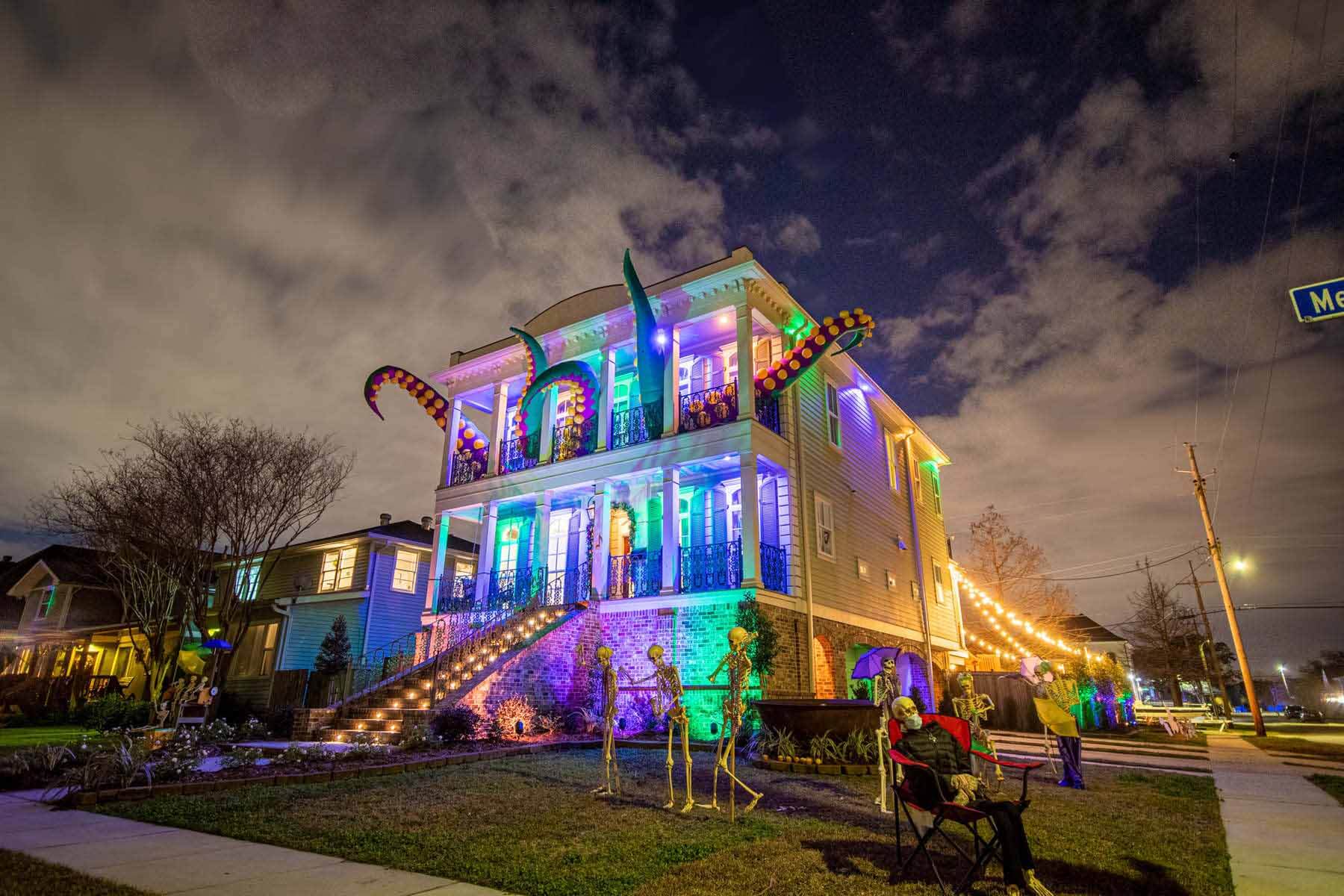 Creativity abounds with this home — complete with a giant octopus slithering out of the second-story balcony!

In launching the Krewe of House Floats, Megan also included a push to help raise $100,000 to help fight unemployment and food and housing issues across the city. $25,000 has already been earmarked for Culture Aid NOLA, the city’s low-barrier free food distribution sites. “As we find new and creative ways of connecting with our culture and community, we’re proud to support the Krewe of House Floats’ mission of Mardi Gras for all, as they support our mission of food with dignity, hospitality and grace,” says Erica Chomsky-Adelson, the nonprofit’s Executive Director.

The maps were released February 1, and the homes will stay decorated at least until Ash Wednesday. You can see all the fun on the Facebook page — there are new pictures and updates posted throughout the day. Inez Pierre says she and her husband have a waiting list 30 people deep, and several people have already signed up to work with them again next year. But more than anything, she says she is grateful the city managed to keep the Mardi Gras tradition alive. “I think what brings us so much joy is to see people smile. It’s like, man, this is so good.”

Megan agrees. “I’m very grateful. I’ve had people thank me for saving Mardi Gras and that’s a lot — I understand the enthusiasm after a whole year of pandemic life and bad news at every turn; having something to look forward to and be a part of is such a relief.”

All photography by Allen Boudreaux Photography.

Subscribe to StyleBlueprint to keep up with the best parts of life in the South!