Comfortable, casual and “just the right shades of chocolate brown.” These were the goals Memphis designer Rhea Crenshaw brought to the ground-up design of a sprawling, elegant East Memphis home. The owners, empty nesters planning for the next chapter, envisioned a future of grandkid visits and putting their feet up.

“Everything about this house – its architecture, their lifestyle – was entirely new,” says Rhea, owner of Rhea Crenshaw Interiors and retail stores Blue Moon Bedding and House. “I think they brought maybe three things with them. Just really, it was a totally new experience.” In this comfy, casual living room, stone used on the exterior carries through to the fireplace wall, bridging indoors and out and adding to the home’s harmonious vibe. Rhea Crenshaw implemented a restful palette of creams and browns.

The family’s former home, where they raised three daughters and entertained many guests, was more formal, Southern, traditional. For their new house, which they built with visits from grown children and an ever-growing number of grandkids in mind, the couple wanted a completely different vibe. They love all things equestrian and the relaxed, easy-living feel of the countryside. Think Napa Valley meets lush, converted stable.

“So everything is very comfortable and casual. It’s very pared down,” Rhea says. “The client’s main requirement was that the entire palette of the house had to be in creams and chocolate browns. And specifically, it had to be the right shades of brown.” Rhea threw herself onto the challenge with gusto, scouring antiques shops, trade sources and art galleries near and far to score perfect pieces for each space in the house. Rhea came into the project early in the construction process, taking her cues from the architecture and the French-inspired neighborhood. Architect Doug Enoch designed the house, bringing its stone exterior onto interior walls in several rooms and giving it the old-world, rustic vibe the homeowners desired. “There’s a lot of texture with the stone walls, the beams,” Rhea says. “Again, it has that sort of stable feel. The experience is not a formal French house but a stable that would have been in the countryside of the south of France, with the feeling that just maybe it was a converted space.”

Sourcing items for this home was a fun, integral part of the project, Rhea says. “Every single thing, I purchased for the house because it just felt right for the space. I would find the items through travels and just really, the pieces spoke to me. Everything sort of felt right with its level of unpredictability.” A graceful console displays a collection of antique hat molds, with a Bruce Brainard painting from David Lusk Gallery hanging above. An arched doorway perfectly frames the vignette. Rhea scoured antiques shops across the South for just-right accessories, art and accent pieces. “All of the accessories, we wanted them to feel old,” Rhea says. The entrance hall is particularly distinct thanks to a unique footprint. Enoch incorporated a fireplace and turned the entry into a room in its own right, imbuing an aura of warmth and coziness that guests recognize the second they walk through the doors. “The entrance hall is one of my favorite spaces because it is so unpredictable,” Rhea says. “And I’m giving Doug the kudos for having the fireplace in the entrance. Again, to me it sort of feels like that equestrian stable in the countryside that you might have from hundreds of years ago because it would have been needed to heat the space.”

The team achieved neat symmetry and maximum functionality with a quad of built-in benches that flank the entry door and, across from it, the fireplace. “That’s where you plop down to take your boots off,” Rhea says. Taking cues from the rustic architecture, she incorporated a treasure trove of equestrian accessories and art, including the homeowners’ original works by Robert Dutesco, famed for his photographs of wild horses on Sable Island, a small island off Nova Scotia. 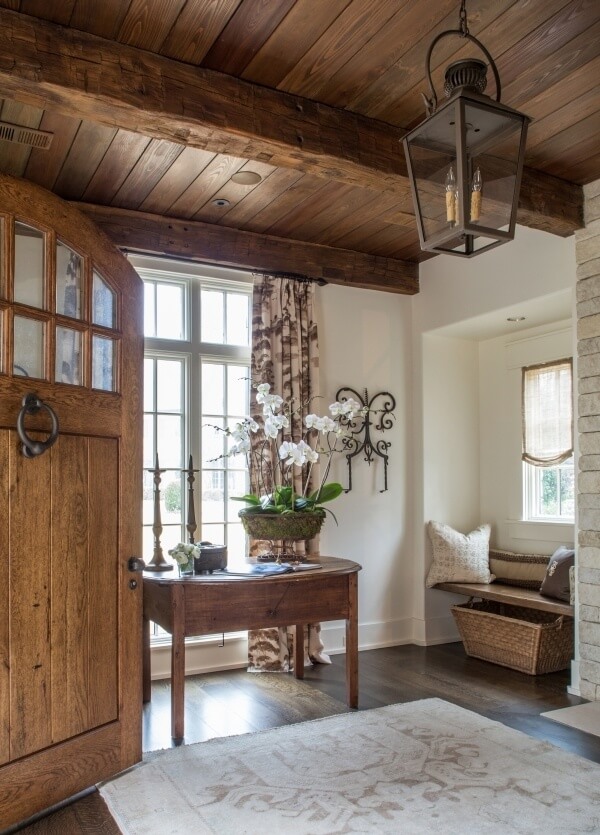 The entryway is a room in its own right, with a cozy fireplace and benches “where you plop down to take your boots off.” Rustic wood ceilings and stone touches in the interior give this home the feel of a converted stable or a Napa Valley ranch.

The kitchen, dining room and entertaining spaces are open, airy and connected — and that was by design. Working with Doug’s’s kitchen design, Rhea selected finishes, materials and furnishings that link the space to the rest of the home – important considering its wide-open footprint. “In the kitchen, we wanted that same comfortable elegance,” she says. “The kitchen is open to the living room and dining room — those three rooms are entirely together. Often a house is designed where your kitchen and your den or keeping room are together but they’re not usually open to your formal dining room and living space. The homeowners’ wanted “casual elegance” in the kitchen. A wide, arched doorway connects the room to the living and dining room and continues the home’s harmonious color palette.

The dining room is built for durability and function as well as style. Master furniture maker Robert Johnson custom-built the dining table to accommodate large family gatherings. “In their old house, they didn’t enjoy their dining room,” Rhea says. “It wasn’t an inviting space and it wasn’t big enough and couldn’t seat the number of people that they always had at their gatherings.” The couple also leans toward casual entertaining rather than formal. “So they don’t mind the dining and the living rooms opening up into the kitchen,” she adds, “because it’s such an all-inclusive atmosphere. Everybody’s cooking, everybody’s drinking wine, everybody’s setting the table.” A hammered metal apron sink, professional range and built-in banquette are among the chef-friendly, family friendly features in this cozy kitchen. The homeowners asked Rhea to stick with a palette of soft creams and chocolate browns throughout the home. “Every fabric was a cream or brown,” Rhea says. “Even the artwork is along that theme.”

The living area also is connected to an outdoor cooking space and a pool, bringing an indoor-outdoor element that also functions well for the owners and their growing tribe. And upstairs, spaces for visiting family make the home serve two functions — and essentially live like two houses. “The master, living, dining and kitchen are all on the first floor and live as a small house,” Rhea points out. “And then upstairs is a playroom and the bedrooms for the grandchildren. So this is open to a lifestyle of two people living in the home day to day but accommodating a family of five with grandchildren coming by the day. When they moved in they had one, and now they have three or four on the way.” The one exception to the home’s neutral palette is the soft sage in this guest bedroom. Here rusticity meets elegance with luxe, restful results. A playroom is a perfect spot for a touch of playfulness and a punch of color. Guest rooms for kids and grandkids turn the upstairs into a family wing while the downstairs functions as a “smaller house” when company leaves. Rhea had a blast scouring shops for the perfect equestrian touches. “I love the big wooden horse in the stair landing,” she says. “I literally found every single thing in the house.” Below the staircase, a cozy nook showcases more of the home’s rustic stone and wood finishes, as well as a carpet in signature creams and browns.

Below the main level, a basement game room serves as wine cellar, poker lounge and after-dinner hangout space. The husband collects sports memorabilia and loves wine and this space is ideal to display both. “Now he has three sons-in-law and it gives him a great space to be with them,” Rhea says. The cozy, rustic basement is a favorite spot for the husband to gather with his new sons-in-law. “They use that space a lot for after the dinner party or for small games of poker,” Rhea says.

From top to bottom, the home is designed to live easily, to be inviting and never intimidating. “There’s a ‘put your boots up on the coffee table’ kind of feel,” Rhea says. “That’s what that whole open space of the kitchen, living room and dining room encompasses — the idea of everything being together.”

Thanks to Julie Wage Ross for her beautiful photos of this spectacular home.

Keep up with the best of the South — follow us on Instagram, where we feature amazing homes, delicious food, beautiful fashion and so much more each and every day!