The History Behind 6 Charlotte Street Names

Some of Charlotte's busiest streets have impressive histories dating all the way back to the Revolutionary War. Find out the meaning behind six of the city's main street names. Image: Charlotte Mecklenburg Library.

We drive down busy streets every day — going to work, to dinner, to the grocery store or a workout class — never paying much attention to the names of the roads that get us from point A to point B. The only time we really take notice of those little green street signs is if we get lost or are following directions on our phones, but the names on those signs are an important link back to our city’s past. Here’s the history behind six of Charlotte’s street names. 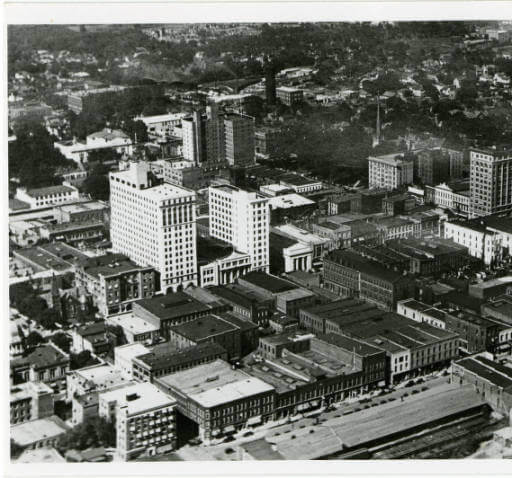 Before Charlotte was the bustling metropolis it is today, it was a textile town with bumpy dirt roads. In the early 1920s, William Cook Wilkinson, a wealthy businessman, banking president and mill owner, joined the state’s highway commission and was granted $50 million to construct a road to make it easier for people to travel between Charlotte and Gaston County to other mills. Once it was completed, Wilkinson Boulevard became the first four-lane paved road in the state of North Carolina.

Not far from Wilkinson Boulevard is Camp Greene Street — and it’s not named for the kind of camp you might expect. During World War I, Charlotte established a military training center named Camp Greene, where thousands of young men prepared to go to war. The camp’s namesake was a Revolutionary War hero, Nathanael Greene, a major general for the Continental Army who led a successful campaign that helped force the British army out of the Carolinas. Although the camp eventually declined and closed, the name lives on. Camp Greene brought thousands of new people to Charlotte, and many stayed after the war. Image: Charlotte Mecklenburg Library Only a few miles down the road from Camp Greene were stables where the army’s cavalry kept and tended to their horses — leading to the name Remount, because it’s where the officers would saddle and mount up during WWI training. Rozzelle’s Ferry Road get its name from the Rozzelle family that ran a ferry across the Catawba River for generations. For a small price, the Rozzelles would get passengers safely across the river and were the only operating ferryboat in Mecklenburg County before the Civil War. The family stayed in business until the early 1900s, when a bridge was built across the water. To honor them, the road and bridge that cross the river are named after the family who helped transport passengers from the banks of the Catawba for so long.

There are several roads snaking through Charlotte that have the word Sharon in their names — Sharon Road, Sharon Amity, Sharon Road West, Sharon View — and it can all be quite confusing if you don’t know where you’re going. Heck, it’s confusing even if you do know where you’re going. Turns out the Sharon name relates back to Sharon Presbyterian Church, which at the time was commonly used as a landmark to give directions. A lot of streets around town garnered their names from the churches that were in the area, including Providence Road and Sugar Creek Road. Sharon Presbyterian Church was built in 1831 and is the namesake for Sharon Road. Image: Charlotte Mecklenburg Library

Long before Tryon Street was lined with towering skyscrapers, restaurants and banking centers, it was part of the Nations Path, a trading path used by the local Catawba Tribe along with other Native Americans to travel between Georgia and Virginia. Years later it also became an integral part of life for early Colonial settlers who moved to the area for trade and travel. The street was named after the colony’s eighth governor, William Tryon, and is the main reason Charlotteans call the city’s center Uptown instead of Downtown. Tryon Street was built on a slight incline, so no matter what direction you’re coming from you’ll be moving upward to reach the city. Next time you’re driving around town take notice of the street names on each corner — you might just be surprised by their interesting histories!

And be sure you’re signed up for StyleBlueprint Charlotte emails to get exclusive offers, fabulous content and the best “me moment” of your day! Sign up HERE.