A Bachelor Pad: At Home with Lee Baskerville

As CEO of StyleBlueprint, Liza also regularly writes for SB. Most of her writing is now found in the recipe archives as cooking is her stress relief!
Share with your friends!
845
SHARES
Facebook845PinterestLinkedInEmail

Lee Baskerville is one of the most intriguing people I’ve had the pleasure of speaking with in recent years. An artist, he started his career at the young age of nine. Desiring a dirt bike, a Honda Z50R to be precise, and having parents who refused to buy it for him, he announced he would make the money himself. They assured him that if he made the money, he could buy the bike. A marketing company commissioned him based on submitted work and learned, only after approving and paying for the half a dozen illustrations, that the artist was actually a young boy. With the Honda dirt bike in hand, he recognized that his ability to create and see the world through his God-given artist’s eyes could be a career. Now, Lee is one of the most sought-after artists in the country. Lee Baskerville, painting at his studio.

Lee is not solely a portrait artist. While he has painted hundreds of formal and informal portraits, his body of work includes thousands of landscapes and still lifes and over thirty architectural murals. In fact, when my family and I visited with him in his home, we were able to see the official Iroqouis Steeplechase painting for 2013–he is the chosen artist for this year’s event. 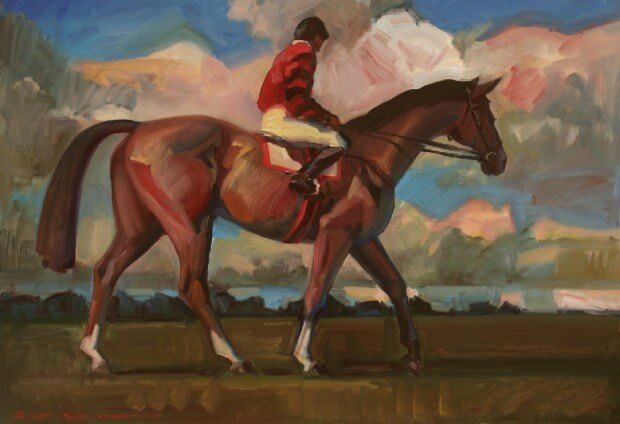 The featured art for the Iroquois Steeplechase.

Lee’s home in Richmond, VA, is over 200 years old and is located on one of the city’s oldest streets. From the back yard, you can see St. John’s Church, where Patrick Henry gave his famous “give me liberty or give me death” speech. This house has been a home, an office (for Douglas Wilder, the first African American governor of Virginia), a rental property for parties and weddings and, now, is both Lee’s studio and home. You feel the history walking into this house, and the juxtaposition of modern furniture, as well as ancient and modern art, against these storied, old walls is what makes this house come alive. Don’t let the muted tones surprise you; there is a palpable energy here that cannot be suppressed. 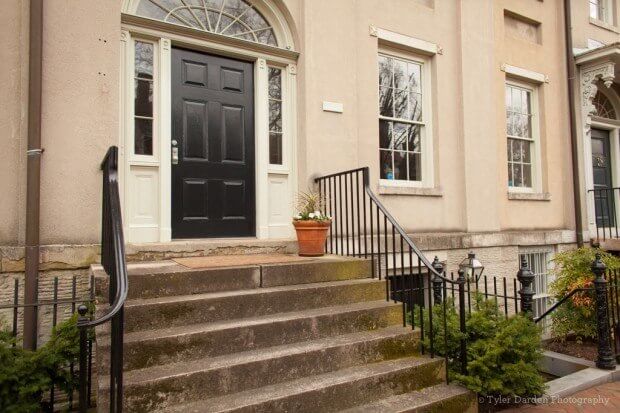 The entrance to this historic home. 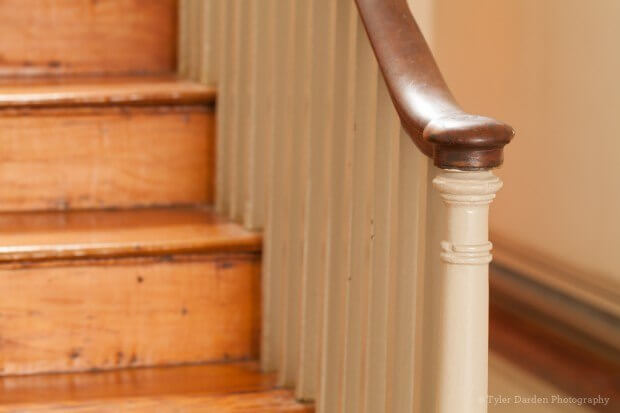 The original wood floors, as seen on the stairs, are still in use. A view of the front door. 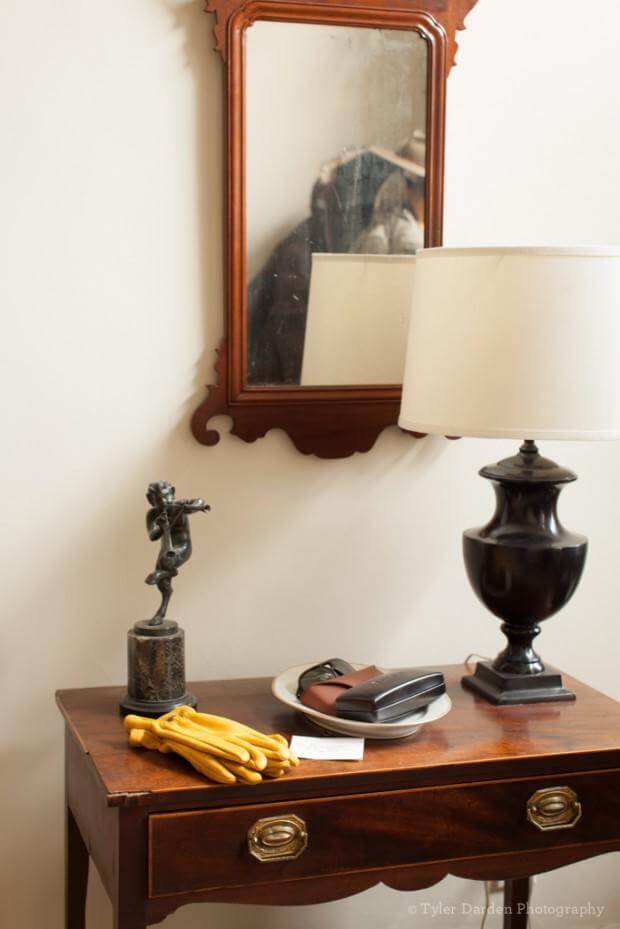 A closer look at the vignette next to the front door.

Lee grew up going on African safaris with his dad (who owns a big game safari company) and his brothers. These experiences instilled a deep appreciation for other cultures, and his fascination with other times and civilizations is apparent in the art and artifacts displayed throughout his home. Lee can talk to you just as easily about contemporary furniture as he can about spotting antiques and imposters. He can talk about hunting in Africa, as well as duck hunting on the river, and then follow easily into a discussion about how to market a brand in today’s modern world and the new crop of entrepreneurs in Richmond. 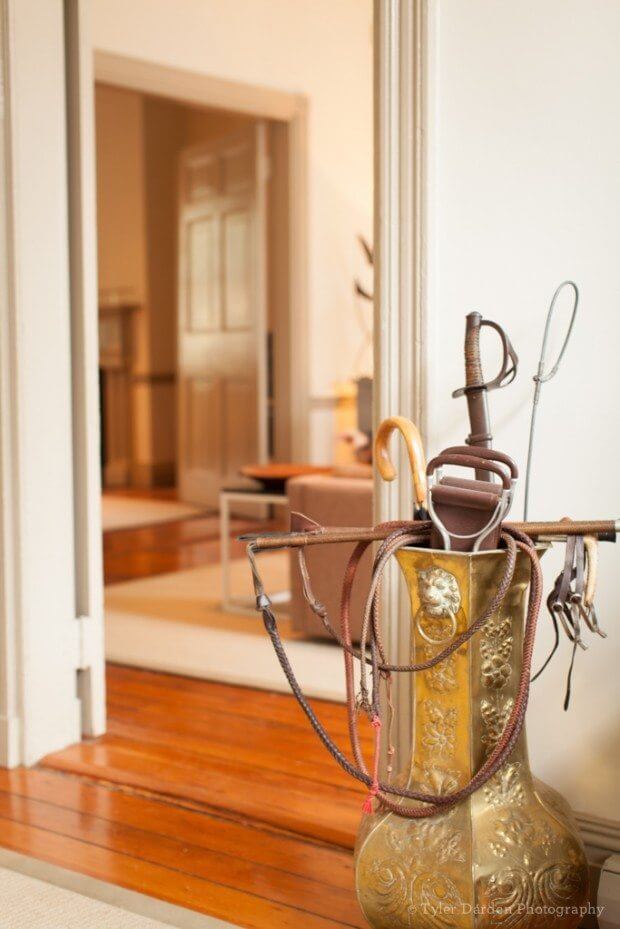 Not the standard collection commonly found in a front foyer! This grouping in and of itself will lead to many conversations. 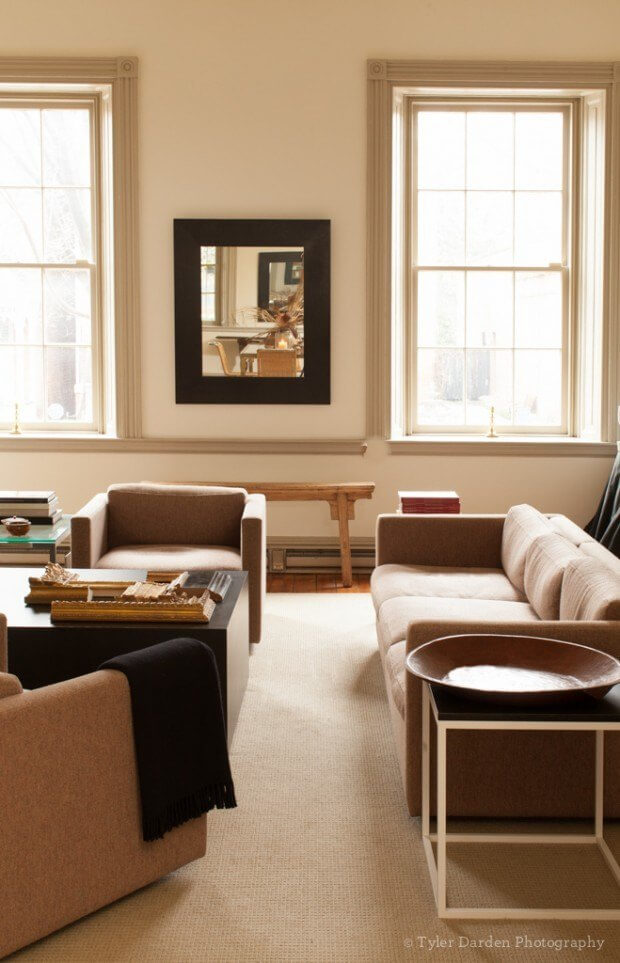 The living room, which looks over historic E. Broad Street. The downstairs mantels are loosely based on the mantels at Tuckahoe Plantation, the boyhood home of Thomas Jefferson. It is known to have the finest woodwork of this era in the country.

Greeting us at the door dressed conservatively in a sweater, blazer and slacks, this bachelor had no problem allowing my kids to come in with bags of McDonald’s breakfasts in hand (no judgement here … we ate local 100% on our spring break except for this one lapse!) and eat at a table whose centerpiece was a vase from the Jin Dynasty, 265-420 AD. Given that much trust, my kids rose to the occasion and acted as they should have, and with a certain reverence, having been invited to sit in and among such history. We were in awe of the Chinese Neolithic vases from 2000-3000 BC that we spotted. And, just so you don’t find this scene too over the top, there were a few from Restoration Hardware, as well!

Having a conversation with Lee. Nothing like a family of 5 invading your home one morning! 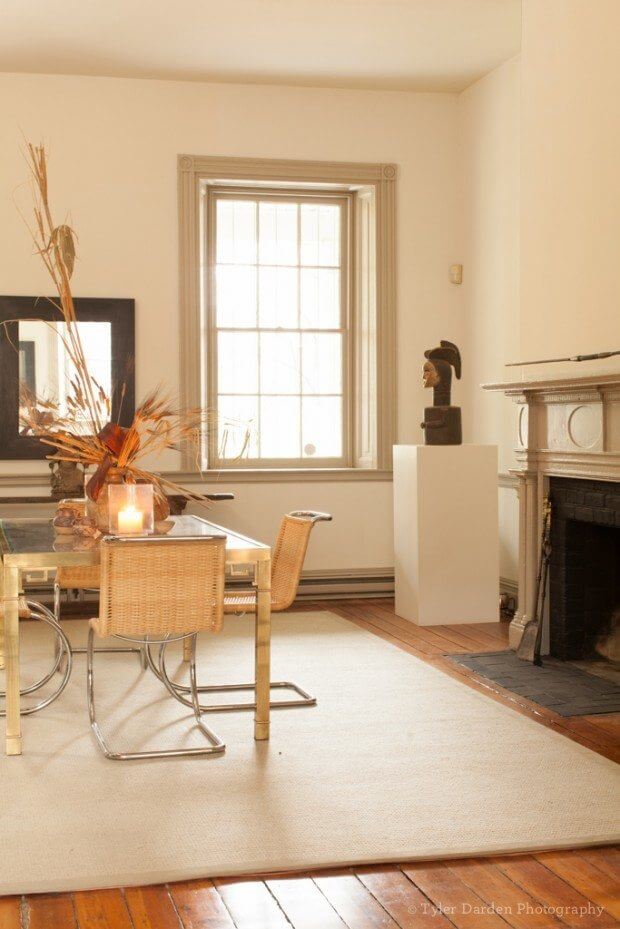 The dining room. The spear above the mantel is actually a lion spear. Yes, used by African tribes to kill lions when being attacked. Lee’s art is found throughout his home, which is also his studio. 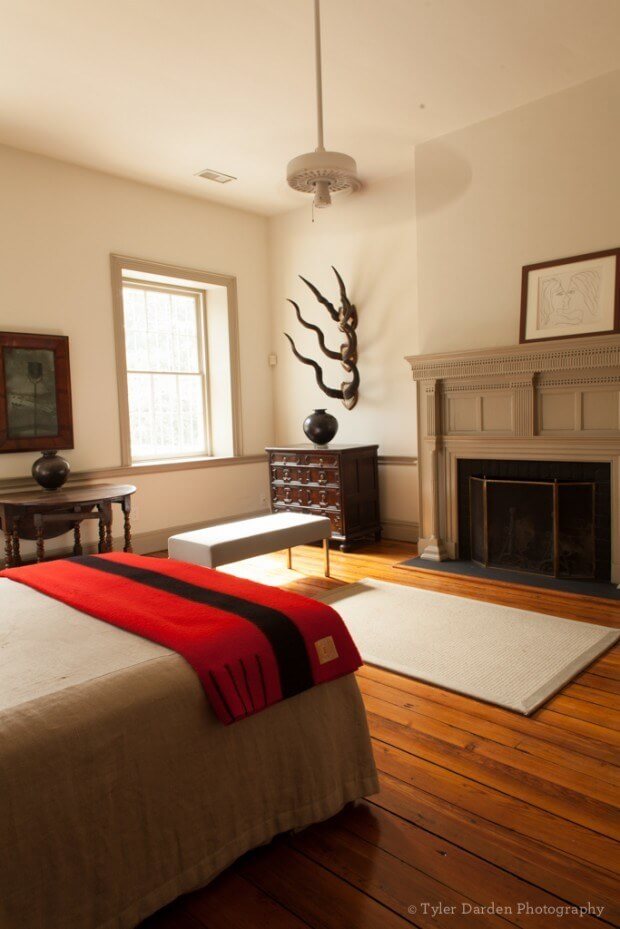 The master bedroom is also a showcase of different cultures and time periods. We spent a sleepy, rainy, sleeting morning in Richmond chatting for hours with Lee. He emits a passion for beauty, history and knowledge that is infectious. After hearing him talk about how he paints each portrait only after truly getting to know his subject, and having seen examples of his work, we all understood why he is in such demand. Being in this home, talking with Lee and learning more about the history of the area was a total treat. As an aside, whoever persuades this guy to finally commit will surely have a life filled with beauty. But, there may be an argument about who gets to pick the paint colors for the house.

A special thanks so Tyler Darden for these beautiful photos today. An artist himself, we couldn’t be more impressed by this Virginia photographer. For more of Tyler’s work, see tylerdardenphotography.com.

More on Lee Baskerville: “Baskerville’s career has taken him to the far corners of four continents and still continues to. Today his artwork appears in American, English, Spanish, Dutch, Portuguese, South African, and Zimbabwean collections…Currently over 4000 limited editions of his works are in circulation. He has held exhibits in the United Sates, Portugal, and South Africa.” – Lee Baskerville website.