A famed South Carolina pitmaster, a Tennessee ‘cue savant and one Alabama boy are putting their spin on a classic Southern staple. Here are Birmingham's new barbecue joints you've got to check out!

It’s the fabled fare of the South. Cooked slow and slathered in savory sauce, barbecue is a mainstay in the Magic City food scene. Spanning from Downtown out to the ‘burbs, barbecue joints are cropping up left and right. Some tucked away in neighborhoods and others claiming real estate on main drags, these pits attract people to some of the city’s best flavors.

While there are plenty of stalwarts who have proven their place in Birmingham’s barbecue scene, there’s also a new generation of joints worth checking out. We rounded up three newbies who are adding their own twist to the Southern staple. While each restaurant boasts its own distinct flavor, they all have one salient commonality: Their barbecue is finger-licking good.

Even on a weeknight, you’ll likely find crowds gathering at Martin’s Bar-B-Que Joint in Cahaba Heights. Hickory smoke wafts from the pit, which is located front and center, right next to the bar. Pat Martin, who pioneered the place, has always had a penchant for smoking whole hogs “the Tennessee way.” Even back in college, the budding pitmaster was known for packing out fraternity parties with his slow-smoked pork. “I was born in Memphis, so I guess it’s in my DNA a little bit,” Pat says. Martin’s covers all the Southern staples with its menu. From pork sandwiches to wings and loaded potatoes, there’s something for every palate. Image: Martin’s

The preparation is what sets Martin’s barbecue apart. After the meat is cooked, it’s pulled apart — not chopped — and topped with slaw. Most of the sandwiches and sides at Martin’s are inspired by Pat’s own family recipes. He put his heart into the business, and he hopes customers feel that when they stop by his restaurant, which is among eight nationwide. “When I opened Martin’s, I wanted it to speak to my generation and my interpretation of my South,” he says. And the atmosphere of Martin’s reflects that. Walls adorned with country star memorabilia and other knick-knacks convey an eclectic yet cozy ambiance. “We also have some old ’80s metal on the walls because that’s what I was listening to when I was in high school,” Pat says. “We didn’t just go out and listen to Hank. We were listening to Metallica, too.”

Choosing to bring Martin’s to Birmingham was a big step for the business, Pat says. He knew he had a lot to live up to. “I think Birmingham is the most competitive barbecue market in the United States,” Pat says. “A lot of people don’t know that.” Since opening in November, Martin’s has enjoyed a positive response. Judging by the regularly packed restaurant, it’s safe to say this joint will be around for a while. A rack of ribs at Martin’s makes for the perfect weekend meal. Owner Pat Martin has perfected the art of whole-hog cooking, and he makes sure every dish is served the way he would want. Image: Martin’s All pork sandwiches come topped with slaw at Martin’s. The combination of slow-cooked barbecue and a medley of slaw makes the perfect Southern sandwich. Image: Martin’s

Mark Snyder recently recreated his backyard barbecue pit in Homewood. Centrally located on 18th Street South in Homewood’s shopping district, Mark’s Joint Backyard BBQ gives a reverent nod to Mark’s childhood, which was rooted in ‘cue. A native Alabamian, Mark grew up grilling at his grandparents’ house in Coker, AL, where barbecue was often served alongside heaps of Alabama football — perhaps the most iconic Southern duo.

“I am about as laid-back as they come, so when the opportunity arose to open my own restaurant, backyard barbecue was the only menu I considered,” Mark says. “It just suits me.”

While classic pork is the focal point of the menu, you’ll also find a few other items at Mark’s, like chicken salad sandwiches, seared Ahi sliders and grilled cheese. Tex-Mex additions like tacos and nachos make the menu as dynamic as the atmosphere, which has pops of pink decor and large chalkboards advertising specials. True to Mark’s family-centric take on business, small details throughout the restaurant point to his upbringing — like his grandmother’s dinner bell.

For first-timers to the joint, the staff usually recommends a classic pork sandwich served with two homemade sides like the “my momma’s slaw” and the local favorite, mac ‘n’ cheese. And if you’re looking for an opportunity to cut loose, check out this barbecue joint on the weekend. Mark hosts a party every Saturday from 11 a.m. to 3 p.m. with live music and beer. 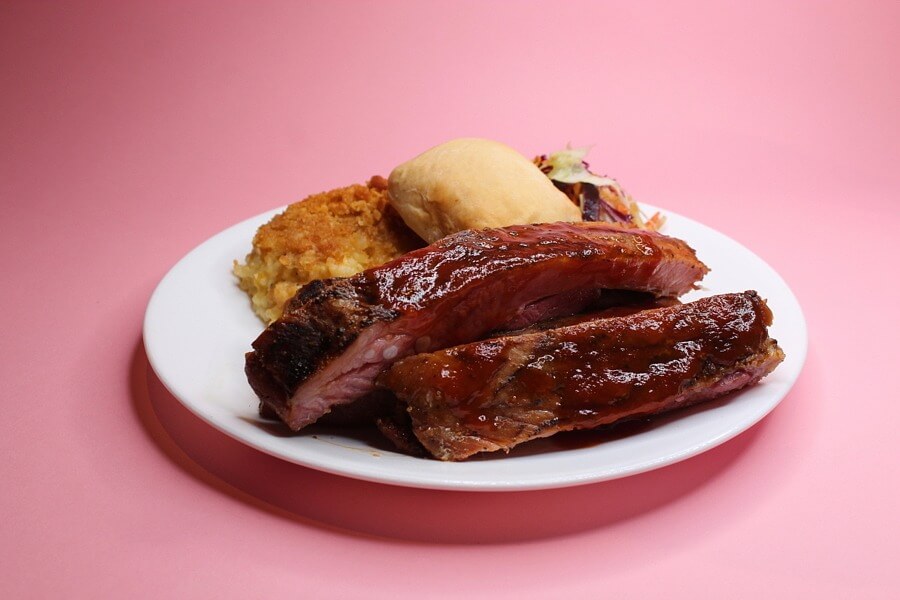 The spare ribs are already a favorite at Mark’s Joint Backyard BBQ. Served fall-off-the-bone style with two homemade sides, it’s hard not to clean your plate with this order! Image: Adelaide Matte You’ll find more than just pork at Mark’s. Smoked white barbecue chicken sandwiches and sausage dogs are just some of the inventive options on the menu. Image: Adelaide Matte Nachos at a barbecue joint? Yeah, that flies at Mark’s. Served with your choice of pork or chicken atop crunchy tortilla chips, melted pepper jack and cheddar cheese, chopped peppers, cilantro, queso fresco and salsa, these nachos are worth coming back for more. Image: Adelaide Matte

RELATED: Warm Up with These 11 Comfort Food Dishes in the Magic City “Nina’s Salad” brings new meaning to the ordinary leafy salad. Tossed with black beans, fresh corn, avocado and a long list of other mouthwatering ingredients, this salad holds its own. Image: Adelaide Matte Make sure to save room for dessert at Mark’s. The chocolate pie is the perfect decadent note to round out your meal. Image: Adelaide Matte

Pitmaster Rodney Scott of Rodney Scott’s BBQ developed a taste for barbecue at a young age while smoking hogs behind his family’s convenience store in Hemingway, South Carolina. He quickly took to the “whole hog” method of cooking — eventually attracting folks from miles away who sought out the barbecue for its distinct flavor. In 2010, the small-town barbecue joint made a big move and relocated to Charleston in an effort to meet its growing demand. This year, Rodney decided to open his first location outside his home state. The decision was two-fold.

“My partner Nick Pihakis of Pihakis Restaurant Group is located in Birmingham and very familiar with the city,” Rodney says. “But also, Birmingham is such an up-and-coming city — especially in the food industry. I’ve spent a lot of time there over the years, and it’s just a fun place to be.”

Rodney smokes his hogs the Eastern Carolina way, cooked belly-side-down for 12 hours. Nothing is rushed. “The ‘whole hog’ concept essentially means having the ham, shoulders, loins, belly and rib meat all pulled and put on a sandwich, where you can experience a bite of every part of the hog,” Rodney explains. Smoked chicken and collards … could there be anything more comforting? This sandwich from Rodney Scott’s BBQ hits all the high points! Image: Andrew Cebulka Fried catfish at Rodney’s comes from farm-raised catfish, is cornmeal-breaded and then served with house-made tartar sauce. Image: Andrew Cebulka Fall-off-the-bone goodness is a signature trait of Rodney Scott’s ribs, which are cooked over hardwood and smothered in his signature sauce. Image: Andrew Cebulka You can’t go wrong with a classic pork sandwich, Southern side and a cold beer at Rodney’s. Image: Andrew Cebulka Rodney Scott learned how to smoke barbecue from his parents, who often hosted impromptu gatherings behind their convenience store in Hemingway, South Carolina. Today, Rodney’s name has become famous among barbecue aficionados who admire his whole-hog style of smoking. Image: Andrew Cebulka

As for the sauce, Rodney slathers his pork with a vinegar-based concoction seasoned with pepper. Everything is made fresh daily — in keeping with family tradition. Even after decades of cooking, Rodney says he couldn’t imagine doing anything else — and he can’t wait to share his talent with the Magic City. “Barbecue unites people,” he says. “That’s a fact. Fire goes up, and people flock. And there’s an immediate, unspoken bond. It’s a beautiful thing — seeing people of all cultural backgrounds and races come together around a table and share a meal. I love it!”