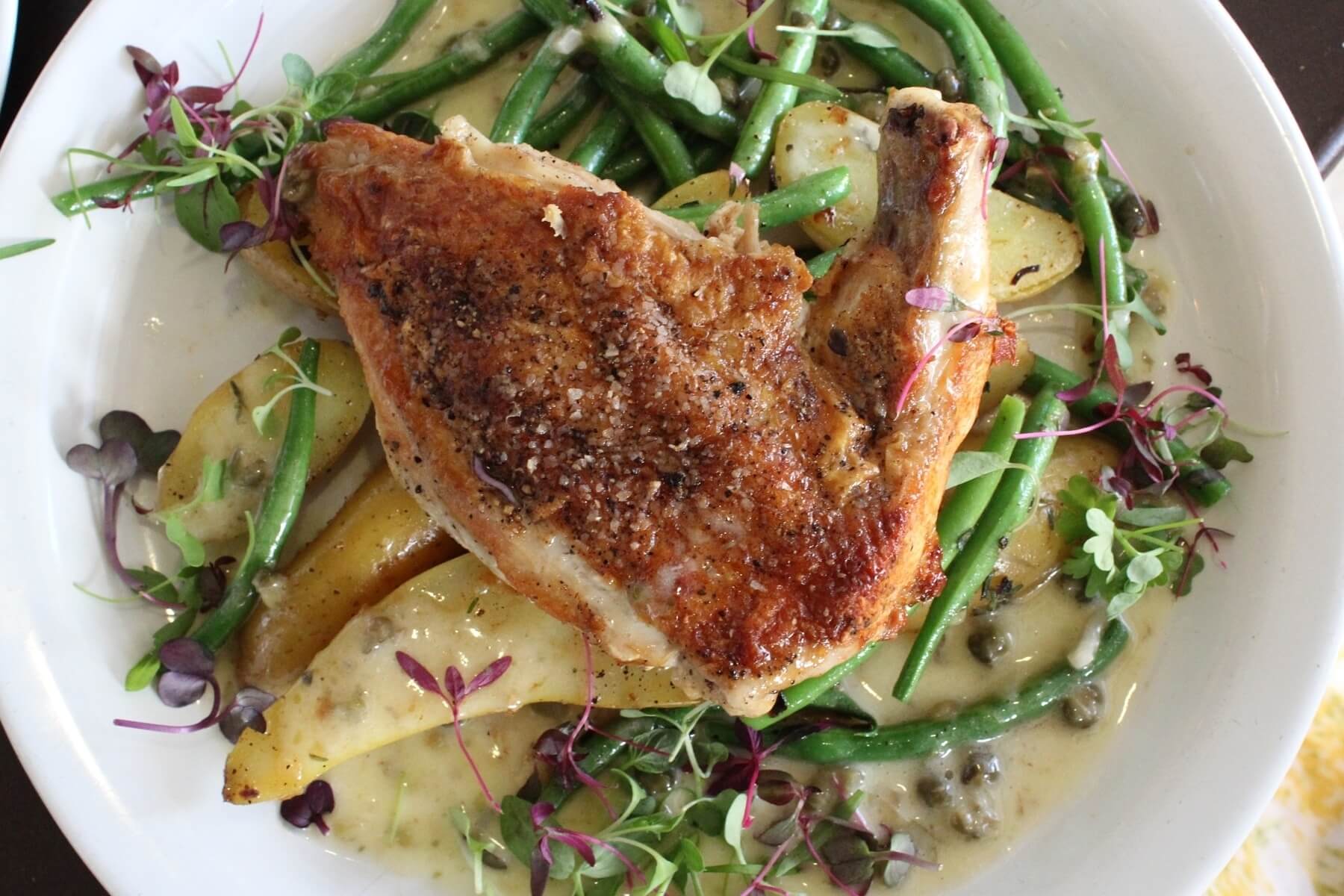 If George McMillan III wasn’t a chef, he’d probably be on a farm somewhere in Alabama growing vegetables or raising animals. His love of the land runs deep, and it shows in every beautifully plated dish he crafts at FoodBar, where most ingredients are sourced locally and menu options change with the season.

“A lot of times I feel like if I weren’t cooking it, I would probably be growing it or raising it,” George says with a smile while taking a break at the restaurant, located in the heart of Cahaba Heights. Chef George McMillan III opened FoodBar in Vestavia Hills a few years ago. He wanted to offer upscale dining in a cozy setting. “I’m born and raised in Birmingham and have never really wanted to be anywhere else,” he says. The New Merkle Shellfish Stew is a favorite at FoodBar. It’s a blend of littleneck clams, Gulf white shrimp, mussels and snapper — perfect for any seafood lover. With a curved bar and a knowledgeable mixologist on staff, FoodBar offers the perfect atmosphere for enjoying a cocktail.

George opened FoodBar a couple of years ago after leaving his former restaurant, Daniel George, in Mountain Brook Village. Looking to offer something more casual, he decided to blend a laid-back atmosphere with upscale menu options and created FoodBar — a restaurant that honors taste above all else.

From the crispy kale salad that patrons can only get during the winter months, to the red snapper that’s a favorite year-round, FoodBar is George’s way of giving a reverent nod to local and regional growers who spend their lives working with the soil. Every ingredient has a story and a passionate farmer behind it at FoodBar.

“We have a great relationship with those guys,” George says of the farmers FoodBar regularly calls on to make their menu stand out from the rest. “We certainly recognize our proximity to the Gulf and all the bounty that it provides — and we try to showcase that as best we can.” Seasonal appetizers, like this jewel-toned citrus salad, grace the menu at FoodBar. Because Chef George puts such a heavy emphasis on locally sourced food, the menu is in constant rotation with the season. The Pulpo — spicy charred octopus with citrus yogurt — is a favorite among customers at FoodBar.

RELATED: From Bean to Bar: Birmingham Taps Into the Craft Chocolate Movement The crispy kale salad, which features pickled onion, sherry buttermilk dressing and a farm egg, is a seasonal favorite at FoodBar. This isn’t your average burger-and-fry combo. Chef George goes the extra mile and indulges guests in a housemade ketchup and crispy potatoes fried to perfection.

For FoodBar first-timers, George recommends starting with a seasonal appetizer and then ordering a seafood entrée (the crab claws and fried oysters are his favorites). Or, come on a Tuesday night and take advantage of the restaurant’s half-shell happy hour where oysters and select drinks come at a fraction of the regular cost.

“On Wednesdays, we do ‘Wine Wednesdays’ and have half-off select bottles of wine as well,” George adds.

Aside from the tasty menu that’s in constant rotation, the restaurant’s atmosphere reflects its humble message of good ingredients prepared to perfection. When it came time to design the space, he turned to Hatcher Schuster Interiors. George says he wanted his new eatery to be cozy, yet allow guests to experience something a little more upscale than they might on a regular night out. The wood paneling that lines the walls and bar is reclaimed from a former barn in Selma, and the tables are made from wood George’s brother-in-law had on hand.

“You can still see the marks made in the timber, and I think that’s just the coolest thing,” George says. Head to FoodBar on a Tuesday night and take advantage of the restaurant’s half-shell happy hour, when oysters and select drinks come at a fraction of the regular cost.

This gorgeous chicken dish is almost too pretty to eat! Wood tables and a striking red banquette line the wall of FoodBar, where patrons are invited to share a cocktail and seasonal dishes prepared to perfection. From champagne-based cocktails to an impressive beer and wine menu, the bar has an extensive selection. Every patron should leave room for dessert at FoodBar. With a citrus shortbread crumb and toasted meringue, the individual meringue pie proves that sharing is overrated.

Behind the bar, a large black and white photograph depicting four young boys hangs on the wall. One of those boys is George’s father. “It was taken in Greenville, Alabama,” George says fondly while looking at the photo. The photo, he says, reminds him of his Alabama roots. It’s a testament to his love of the land and his upbringing.

On the other side of the restaurant, near the back, another black and white photo shows a logging crew from Tallapoosa County. “That’s from my wife’s family,” George says of the photo, which he says also ties into the restaurant’s theme of reclaiming what’s old and making it new. A large black and white photo hangs on the wall behind the bar at FoodBar. It shows George’s fathers, brothers and childhood friend. The photo, George says, reminds him of his roots and why he is proud to call Alabama home. In the summer, when tomato season hits its peak, George’s tomato salad is a no-brainer.

RELATED: Get Your Chopsticks Ready for Birmingham’s Best Sushi Taken in Tallapoosa County, this photo, George explains, is a photo of a logging crew that was given to him from his wife’s family.

Because Alabama offers so much in terms of food and culture, George says he hopes to spotlight the great state as much as possible at FoodBar. That includes the food and the overall ambiance, he says. As the season shifts into spring, he says locals can expect a smorgasbord of local fare to be served at the restaurant.

“I can’t draw a circle and will never be able to color within the lines, but I do feel like there is some artistry in what we do here,” George says while reflecting on the culinary process. “Produce and proteins are our colors, and the plate is our palette. And we have fun with that.”