In the fall of 2013, when Shane Stratton, owner of Stratton Exteriors and Urban Properties in Nashville, began transforming a dated duplex built in the early 1930s, he didn’t have even an inkling that it would later be featured on one of television’s hottest shows, ABC’s “Nashville.”

Initially, Shane was not attracted to the property, but eventually, the bungalow-style design won him over. With help from friend and architect David Baird of Building Ideas, a new floor plan was drafted. Shane and his fiancée, Paige, purchased the home intending to move in after their wedding. They opted for an open floor plan that was conducive to entertaining. While the front exterior and stone siding remained intact, they didn’t keep much of the original architecture within the home. According to Shane, no stone went unturned. Slowly, the 1,800-square-foot duplex transformed into a 3,100-square-foot, single-family home. Shane and his team really took their time on this house. He didn’t want to rush through this project. While Shane is always flattered to see homeowners appreciate the quality and design of his work, seeing it on television was something totally different for him. 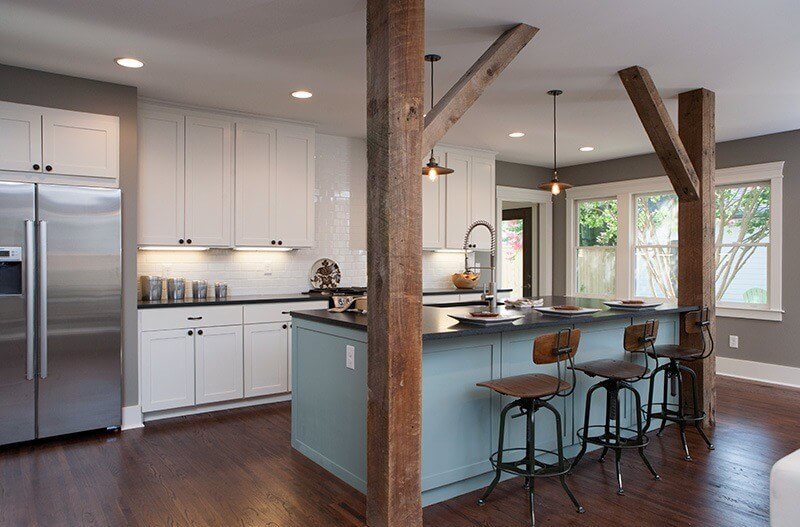 For Shane, the kitchen was a defining aspect of the home. To add another dimension to the kitchen, Shane painted the island in Stratton Blue by Benjamin Moore and offset it with the rustic beams. Not only does the island act as a focal point in the room, it fits seamlessly in the cooks-style kitchen. Shane had the blue color on his mind for a while. He originally planned to use it as an accent on the exterior, but gravitated toward using it in the kitchen, instead. Shane’s favorite part of the space? The open and relaxing atmosphere of the room and the view of the fireplace.

Once the couple was married, Paige took the reins on directing the floor plan, while Shane handled most of the design, incorporating details throughout to reinforce the original feel of the home. In homage to its rich history, Shane integrated much of the original flooring. By salvaging some of the authentic pieces, he was able to fuse tradition with popular style. The wooden beams in the kitchen, which were retrieved from an old warehouse, accentuate the focal point of the room: the blue island. Amidst these rustic touches, Shane added modern features to anchor it in the present. Details, such as the wainscoting and the clean, contemporary look around the fireplace, keep the house looking fresh.

After completing the renovation, Shane and Paige decided to put the home on the market. While they had an emotional attachment to it, they both agreed on the decision. Shortly after listing the property, Michael Lohmann, director of photography for the hit show “Nashville,” came into the picture. He found the home and was instantly drawn to the exterior. Once inside, he found the open-living floor plan, large windows and kitchen beams appealing. All of these individual aspects of the home come together to create a unique look that Michael felt fit the personality of the show and character Gunnar Scott.

Real locations are preferable for shoots and with “really great depth in every direction,” Michael knew the home was perfect for filming. The large spaces and the added garage were two selling features of the home. The garage, which was added during the renovation, has been transformed into a recording studio for the show. In the third season of “Nashville,” Gunnar, a songwriter and musician, becomes the homeowner. Other than great lighting and room for filming, why did Michael choose this home for Gunnar? “It is something a young, successful musician could have aspired to. There is a unique look to the home that fits the character,” Michael shares. Shane salvaged much of the original flooring. The traditional-style narrow planks help preserve the rich history of the home. The space is conducive to both relaxing and entertaining. The vivid hue of the island brightens the room, while the natural wood elements warm the space, creating a balance of contemporary and traditional design. 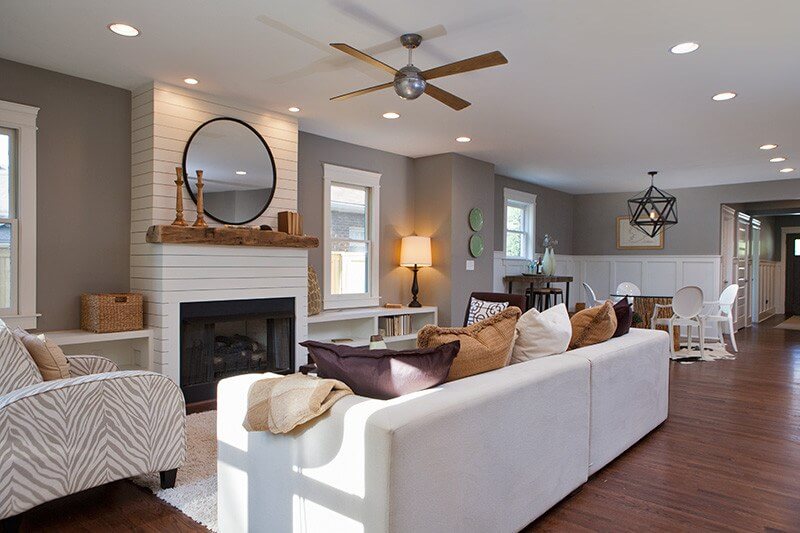 The kitchen opens to the living room. Again, small elements of the rustic, natural aesthetic are incorporated in the room. In this shot,you can see the wide, open space, which appealed to Michael for shooting the show “Nashville.” By opening the floor plan, Shane maximized the space of the home. The design of the fireplace is that of a contemporary piece with clean, white lines that enhance the modern feel of the room with a sophisticated flair. The open floor plan is something everyone can appreciate. It provides versatility and allows for the kitchen and adjacent living and dining areas to act as a large gathering space. The windows flood the space with natural light. As you can see in the office, the light highlights the clean lines within the home. The gray wall color acts to soften the room. In conjunction with the design of the rest of the house, the bathroom marries rustic and modern. Shane’s design called for an updated farmhouse look. The six-foot tile pieces mimic barn wood, and the granite countertops tie the room together. The first-floor master bedroom is conveniently located both for living and shooting “Nashville.” The intimate space is characterized by the rich hardwood floors and the natural light that flows in. The upstairs living area provides additional space for relaxing or entertaining. The unique structural design of the space adds personality to the home. As he had done on the first floor, Shane maximized the second-floor space by creating an open layout. With additions to the back of home, Shane was able to increase the size to 3,000+ square feet. With four bedrooms, two-and-a-half baths and outdoor patio space, this home offers plenty of room.

Don’t forget to look for Gunnar at home during “Nashville!” These are a few times we spotted the kitchen and recording studio.

How can you mimic the look of this bungalow-style home? Create a balance of modern and traditional by focusing on the details. Marry traditional elements with modern touches to liven up the space. And here are some additional tips Shane gave us: “Mixing the old with new is my favorite. I love to create an eclectic look and feel of a home by adding rustic touches. A lot of homes may not have architectural elements built in, but homeowners can add them with furniture and through lighting. Additionally, adding a strategically placed accent wall, beams or a post will add an architectural interest.”