An afternoon tennis game brought Juliet Hellman and Jack Wagner together, and they’ve been partners on and off the court ever since. Both the bride and groom are from Germantown, and grew up with many of the same friends. Juliet attended Briarcrest Christian School, and Jack went to Houston High School. And while they should have crossed paths while attending high school just down the street from each other, it was not until after college that the two were introduced.

Their chance meeting playing a recreational sport is, in hindsight, not a surprise. Both Juliet and Jack are athletes. She is a former competitive soccer player, and he was an intramural athlete at the University of Tennessee. Juliet worked as a Spanish tutor for athletes while attending Auburn University, and Jack ran the campus recreation center while he was a UT student. 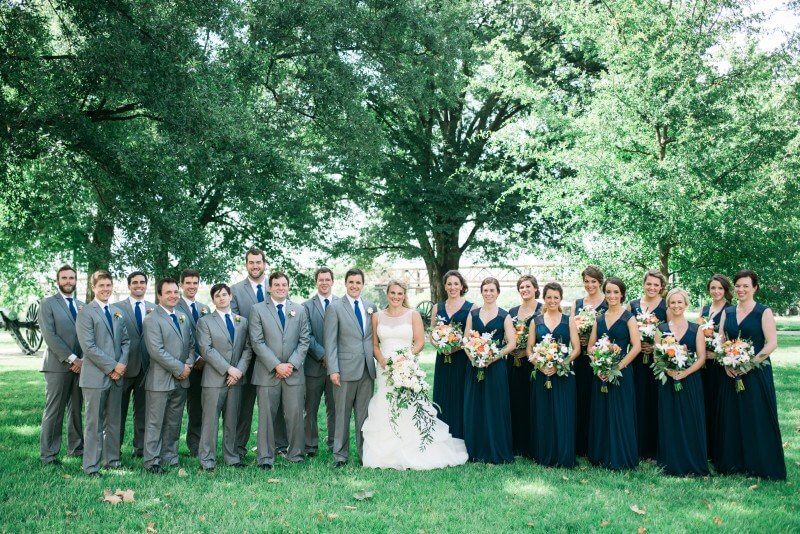 The wedding party of Juliet and Jack Wagner

Mutual friends of the bride and groom thought the two would be a winning team on the tennis court. They were correct. However, Juliet and Jack did not win their first match together. “My close friend, who I met in college, is Jack’s lifelong best friend from elementary school. He and his wife needed someone to play doubles tennis against, and they asked both of us to play,” Juliet explains. They were both seeing other people at the time, but the connection was instant. “I was so confident in our ability as teammates that I put a friendly wager on the game—loser has to buy beer for the group at dinner afterwards. We lost that match, and Jack had to buy beer for the group! He will never let me live that one down.”

They started dating shortly after that spring 2012 tennis match, and they both knew that something was different with this relationship, as they quickly became each other’s best friend. Jack proposed to Juliet over her birthday weekend in August 2014, and they were married the following June. Juliet and Jack married in The Cadre Building, surrounded by the historic charm, classical style and sophisticated elegance of this downtown Memphis venue. “Jack came to my house to pick me up and said that he had a present set up for me outside,” Juliet recalls. “When I walked out of the front door, I saw 12 presents lined up across my driveway. I didn’t know what was going on, but I was excited!” Jack told Juliet that the presents would take her on a trip down memory lane. Each present contained something from their relationship, starting with a can of tennis balls and a coupon for a lesson for them to take together. Juliet’s dress is a Paloma Blanca gown from Maggie Louise. Bridesmaids’ dresses were selected from Bella Bridesmaids of Memphis. Deedra Stone was the floral designer for this summer wedding.

As she opened each one, Jack explained the significance of it to their relationship, and Juliet says she “was blown away by his thoughtfulness and creativity.” When she reached the last present, he said he would open that one for her. As he reached into the bag, he got down on one knee and took the ring out of the bag. His brother-in-law was hiding in the bushes taking pictures for them! Floral designer Deedra Stone created a stunning floral arch above the spot where vows were exchanged.

“After we laughed and cried and took pictures, we headed off to dinner,” Juliet says. She was so excited that she didn’t pay attention to where they were driving, and they ended up at Jack’s sister’s house. “Both of our families were there, and so were my three aunts from St. Louis and his aunt from Atlanta. We had dinner at his sister’s house as one big family, and it was such a wonderful night.” Juliet loved the beautiful columns, marble and gold decorations of The Cadre Building.

Because both are from the area, and most of their immediate family members live in town, the decision to marry in Memphis was simple. Their wedding was an elegant summertime soirée last month at The Cadre Building in downtown Memphis, a venue chosen because Juliet loved the beautiful columns, marble and gold decorations, as well as the layout. Their florist, Deedra Stone, created a stunning floral arch above the spot where vows were exchanged. The cake, made by Peggy Montgomery, had a lace design that matched the bride’s dress, and they used Ziparo’s Catering because, Juliet explains, “They are a catering business with true individuality. The owners of Ziparo’s, Joe and Kristen, made us feel like part of their family.” The bride and groom chose Ziparo’s Catering for their reception because, Juliet says, “They are a catering business with true individuality.” Wedding favors were loaves of bread by Trio Bakery. “I had the best night in my showstopping Paloma Blanca lace wedding gown from Maggie Louise, where the fabulous Molly Farrell helped me find the most perfect dress for my wedding day,” Juliet says. The cake, made by Peggy Montgomery, had a lace design that matched the bride’s dress.

Al Paris & the Heartbreakers played into the night and surprised all of the guests with a Michael Jackson impersonator. A Michael Jackson impersonator surprised guests as part of the Al Paris & the Heartbreakers performance.

This night came together under the leadership of Kathryn Sparks and Patti Ruleman, the WED Memphis team. Kathryn and Patti are more than wedding planners; they become their clients’ true friends and are known for bringing fun, lighthearted energy, organization and solid ideas to the creative process of making a wedding day exceed the bride and groom’s expectations. “Our night was more than magical,” Juliet says, “and we still pinch ourselves to make sure that it was really ours.” Currently, Jack works at First Tennessee Bank in commercial lending, and Juliet is a Spanish teacher and coach at St. George’s Independent School. These two lifelong athletes still spend most of their time being active. They run and ride bikes together on the Green Line, take their dog, Guapo, to Shelby Farms and often go on lake vacations, where both love to fish, paddleboard and grill out. “And,” Juliet adds, “we still love to play tennis together and with our friends. We are so thankful for that fun game of tennis!”

Congrats to the happy couple, and here’s to a lifetime of happiness! Here are the vendors they used to create their magical day: