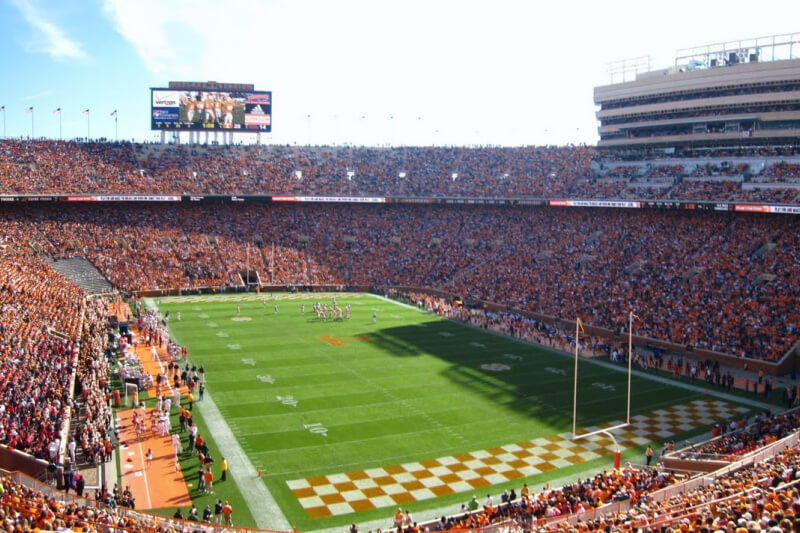 Your SEC Guide to UT Games: Where to Eat, Sleep & Tailgate

Tailgating at University of Tennessee football games? We've got you covered for your game day weekend. Here are our tips for exploring Knoxville. Image: Frank Weiskopf via Flickr CC

Welcome to Knoxville, home of the University of Tennessee Volunteers! If you’re heading to town to catch a game at UT, here’s what you need to know about where to stay, eat, drink, and tailgate. First, a few stats:

While Knoxville plays host to a number of well-appointed, familiar hotels like the downtown Hilton and Four Points Sheraton close to the stadium, these three options are a true celebration of the city. While it may not be the closest hotel to Neyland Stadium, The Oliver Hotel is still pretty darn close, and it’s situated in Market Square, so you have easy access to Knoxville’s best boutiques, entertainment, and restaurants — including the hotel’s own dining space, The Oliver Royale. (SB Tip: Behind the hotel lobby, you’ll find a speakeasy-style bar, Peter Kern Library, hidden away.)

THE TENNESSEAN Hotel sits in the heart of downtown, with a central location to the university, Market Square, and the Old City. The four-star hotel offers 82 guest rooms and luxurious amenities — including a luxury football weekend experience. Their game-weekend offerings include a VIP check-in experience (complete with bubbles and hors d’oeuvres), a pre-game mimosa bar and brunch offerings in their on-site restaurant, and complimentary door-to-door stadium transportation.

The Graduate Knoxville is a boutique hotel filled with Big Orange pride from top to bottom. Be sure to stop by Saloon 16, the hotel’s high-end watering hole that is in partnership with none other than Peyton Manning.

Where to Eat & Drink in Knoxville

If you’re looking for a bite to eat ahead of the game or perhaps items to pick up for your tailgate, here are some of your best bets located near campus. The area surrounding the stadium is bursting at the seams with tasty new spots to try, but here are a few favorites. Gourmet tacos are always a good decision. You won’t regret a meal at Babalu.

If you’re looking for a great breakfast spot before the game, OliBea is a solid choice. The restaurant only serves breakfast, so you know it does it well!

Known for “burgers, bourbon, and beer,” Stock & Barrel is popular among visitors and students alike. If that doesn’t capture your interest, perhaps the homemade shakes will.

With two locations near UT — one in Market Square, the other in a convenient shopping area a few minutes’ drive west of campus — The Tomato Head is a great option for dine-in or take-out. They offer up killer pizza and calzones, and equally delicious salads, sandwiches, and weekend brunch. (If you’re looking for a healthier option, Tomato Head is a good bet!)

A trip to Knoxville is not complete without a pie from Buttermilk Sky Pie. The pies became so popular that the shop has since expanded to locations around the South, but the original is in Knoxville.

If you’re in the market for a pre- or post-game drink, here are a few hotspots to check out — equally well-suited to celebrating or drowning your sorrows.

Perched atop the Hyatt Place, Five Thirty Lounge offers craft cocktails in a cozy setting. Plus, with 15-foot glass windows, you won’t find better views of downtown Knoxville and the Smoky Mountains.

Preservation Pub is a three-story bar offering over 300 beers and regular live performances. Be sure to take full advantage of the rooftop garden deck, too.

The Half Barrel offers everything from craft beer to bourbon. Plus, you might be lucky enough to stop in during one of their many trivia nights.

Casual tailgating takes place on top of parking garages — or in the parking lots — surrounding the stadium. Look for “the Fort” to find a spot for your tent. This is the nickname for the Fort Sanders neighborhood that’s technically off-campus, but very close by.

If you want to purchase a package and have someone else set up for you, Tailgate Tennessee is the way to go. They set up in Circle Park and the McClung Museum areas.

This tailgating tradition is unique to UT football. During home games, the VOL Navy parks boats on the Tennessee River near the stadium, but you don’t have to have a boat to participate in the festivities!

Be sure to learn the lyrics to “Rocky Top.” If it’s playing all day on the loudspeaker, you want to be able to join in. As far as parking goes, there is no on-campus parking on game days, so opt to Uber or Lyft — or be prepared for a bit of a walk.