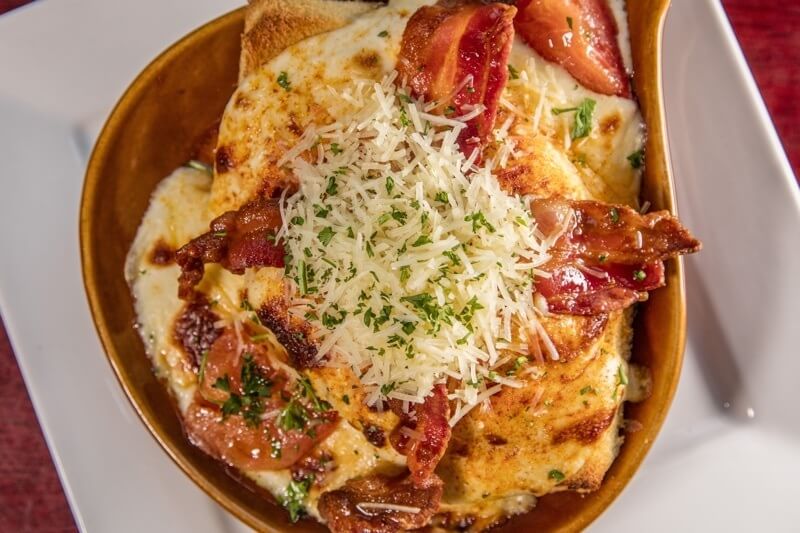 Whether served as a meal, appetizer or canapé, this open-faced turkey and bacon sandwich with bubbly, melted Mornay cheese sauce is a to-die-for Southern recipe. Image: Chris Witzke via The Brown Hotel

The Brown Hotel in Louisville, KY

“The Hot Brown is the quintessential sandwich for Southern cooks when it comes to entertaining,” says Dustin Willett, Chef de Cuisine at the Brown Hotel, where this iconic Louisville dish was born. “It was invented in the South, it is great drinking food, and you can serve it as a full meal, an appetizer or just a canapé. You can also add an egg on top for a savory and hearty breakfast. There is a reason the Hot Brown has stood the test of time — this sandwich is truly something special!” In case you haven’t had been lucky enough to try a Hot Brown, it’s a turkey sandwich like no other. Served open-faced, it’s topped with bacon and a delicate Mornay sauce and broiled until bubbly just before serving. Click here for the full recipe. Originally created in The Brown Hotel in Louisville, KY, the Hot Brown is an iconic sandwich that is perfect for entertaining. Image: Chris Witzke via The Brown Hotel The Brown Hotel in Louisville, KY
This decadent Southern sandwich has stood the test of time. Serve it as a full meal, an appetizer or as a canapé!
4.41 from 61 votes
Print Recipe Pin Recipe
Course Entrée
Cuisine American, American/Southern
Servings 2
Calories 1270 kcal

For more recipes from Southern chefs, check out our recipe archives!