Traditionally, vacation homes in Florida bring to mind thoughts of seafoam green and peach dancing among jars of collected shells. But this vacation home sets the record straight: you CAN capture a beachy feel in a tasteful and natural way.

“Even though the house is painted all white, it’s an interesting play on materials,” says architect Paul Geary, of T.S. Adams Design Studio in Atlanta. “The whole home is a testament to textures, from the old cypress wood used throughout to the marble floors in the bathroom.” Varying roof lines and a charming, shingled façade give this Florida vacation home the appeal of New England.

For the exterior architecture, Paul designed a shingle-style cottage, such as one might see on Nantucket. “It’s the use of materials and architectural details that give the home a quaint beach feeling,” he says.

The homeowners previously owned a condo in the area, but outgrew it as grandchildren came along. Their preferences? Clean lines, no fuss, no bookshelves and simple, classic wood walls. As a textural feature, they requested cypress ceilings, an ideal wood choice for a beach house because of the weathered, light patina. The designer was inspired by coastal colors from the painting above the fireplace to furnish the rooms, relying on whites and blues. Interior designer Courtney Dickey, also with T.S. Adams, picked up the colors of a beloved painting above the fireplace and used them throughout the living room. The blue and natural tones of the fabrics are a play off of the painting. “The homeowner loved the colors in that painting, so we instantly had a color palette,” says the designer. The sofa and club chairs are both Verellen and are slipcovered in a natural linen. The rattan chairs are from Selamat and are upholstered in a John Robshaw fabric. The wall covering in the powder room is a grass cloth from Duralee. The weathered mirror is from Tradewinds. The countertop is Caesarstone organic white. The master bedroom features a modified coffered ceiling, with grass cloth in between the wood. The ceiling and bedding coordinate to give interest in a natural way, explains the designer. “The homeowners found the lamps and loved them, because they add a coastal element without being too beachy,” she says. Marble and cypress wood combine in the master bath for an interplay of textures.

As a nod to grandchildren and beach living, Courtney chose kitchen counter stools with slipcovers made of durable fabric able to be washed over and over. She made sure there was plenty of seating in the kitchen area, since it’s the heart of the house. “There was limited space due to the elevator,” she explains, “So the solution was a banquette, which was able to seat all their children and grandchildren. The slipcovers kept the atmosphere casual and are very easy to clean, since they are made from indoor/outdoor fabric.” “With several generations enjoying this home, it is always nice to have enough room where everyone can spread out,” says Courtney. “This particular sitting area is for the grandchildren to hang out or watch TV.” The console is from Classic Concepts and was chosen to fit the space well, while the lamps were selected because they had a similar look as the console. The artwork on the walls is from pillows that the homeowner was fond of, framed to hang on the walls.

Grass cloth in the powder room and master bedroom adds another layer of texture, particularly interesting with the use of grass cloth on the bedroom ceiling, rather than the walls. Aged beams line the ceiling in the sitting area, filled with comfortable furnishings and more slipcovered furniture.

Every room has some unique feature, but the overall look is uniform and custom to this family—and very conducive to a vacation. Says the designer, “The classic monochromatic palette and simple, restrained details make this relaxing home particularly special and inviting.” 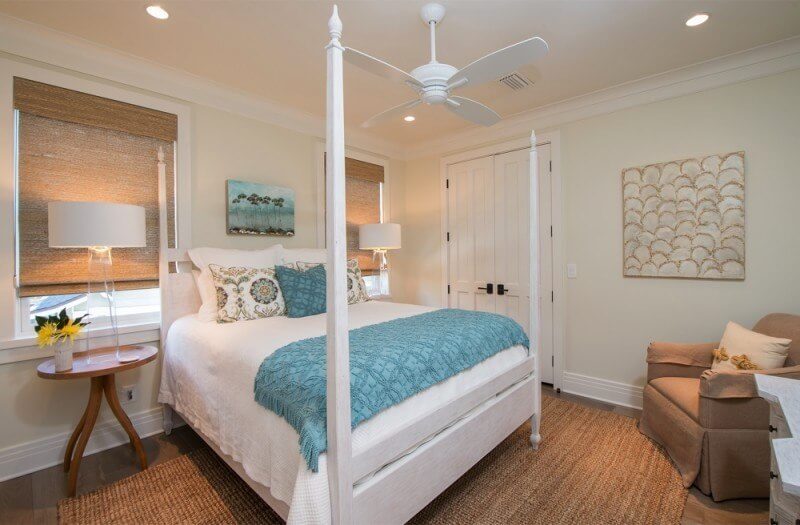 “We liked the color of the four-poster bed for this room,” says the designer. “This is an adult child’s bedroom and we wanted it to be more sophisticated.” The bunk room sleeps five children. Its barn door, cypress ladder and cypress niches provide unique features to the room, along with the yellow accents.

Thanks to photographer Tony Thagard for the lovely photos.