Caroline Dashiell is the epitome of sophistication, style and grace, and at her wedding to Rascoe Dean, her personality shone through. The pair met while attending Sewanee: The University of the South, and after meeting through a mutual friend in December of 2008, they dated until Rascoe popped the question on a weekend trip to Dancing Bear Lodge in Townsend, TN. Caroline surprised Rascoe with this trip for his birthday, but as you can imagine, she was the one who got the surprise. Rascoe was studying abroad in Venice the summer before he proposed, and Caroline took a trip across the pond to visit him. She later told us, “He was planning on proposing in Paris, but couldn’t get the ring he wanted in time … little did he know he had a family ring at home the whole time.” Rascoe later proposed with the family ring and gave the vintage sapphire ring he intended to propose with to Caroline as a wedding present. This acted as her “something old” and “something blue.”

The couple decided on a destination wedding in Palm Beach, FL, where the bride’s parents live. In May of 2014, 250 guests witnessed the pair exchange traditional vows at The Royal Poinciana Chapel, a light blue, picturesque chapel, and then they celebrated with food, drinks and dancing at The Flagler Museum. After the church ceremony, Rascoe and Caroline traveled to the reception in a vintage Rolls Royce. They met friends and family for cocktail hour, which was held outdoors with lounging areas for the guests. The 19th-century architectural details of the venue and the panoramic views of the water captured the spirit of Palm Beach and spoke to the romantic, yet playful, nature of the couple. Every detail of the wedding was well thought-out, and after months of planning, they finally were able to enjoy their special day. The images below capture the details and aesthetics of the wedding, and truly showcase the love and joy Caroline and Rascoe exuded during their special day. Guests were welcomed with boxes put together by the couple’s wedding planners. Inside, guests found a mini bottle of Jack Daniel’s (in homage to Tennessee) and Coke; pink sparkling lemonade; custom M&Ms with the couple’s names in Sewanee colors; a custom map of Palm Beach with the itinerary; snacks; and a Just in Case Baggie, which held Advil, Band-Aids, etc. After getting ready, the bridal party headed to the church. Molly’s Trolleys took the wedding party from place to place throughout the weekend, which was both convenient AND fun! 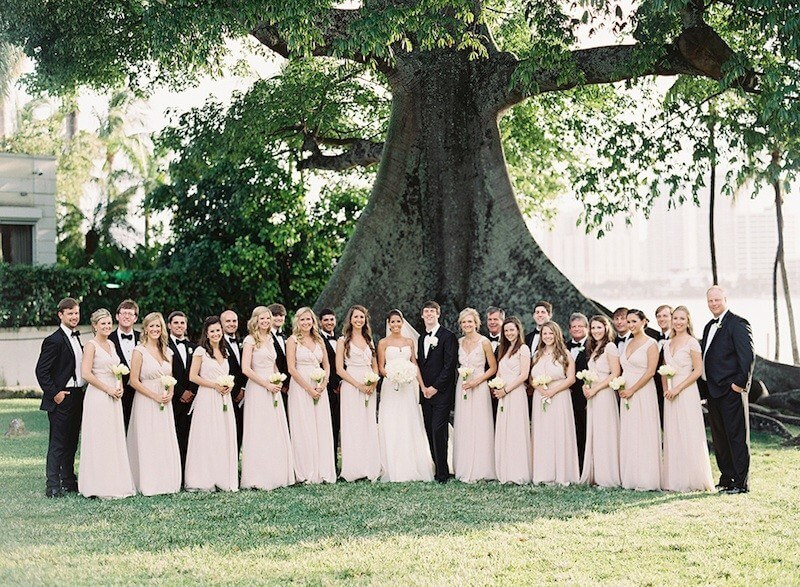 Caroline and Rascoe love to be surrounded by friends, and with 24 people in their wedding party, it was easy! The bridesmaids wore Joanna August dresses in champagne, and the groomsmen wore classic black tuxes. The three maids of honor, all Sewanee friends, wore the same dresses with a ruffled neckline instead of the cap sleeve to set them apart. Caroline and Rascoe wrote letters to one another that they read on their wedding day. Caroline said, “We did not do a first look, so this was really the last we ‘heard’ from each other before we saw each other in the church.” Surrounded by family and friends, Caroline and Rascoe said “I do” using traditional vows. During the ceremony in the The Royal Poinciana Chapel, the organ pipes were a stunning backdrop. Pictured is the vintage Rolls Royce that carried the couple from the chapel to the reception. A few of their Sewanee friends convinced the driver to take them on a spin in the car during the reception. The couple is pictured here with their parents: (left to right) Leslie and Sam Dashiell (South Bend, IN and Palm Beach, FL), Anne Davis and Mayor Karl Dean (Nashville, TN)

The reception included a plethora of personal details that made this wedding truly a one-of-a-kind affair. For décor, Caroline knew she wanted all white flowers and heavy greenery. “Palm Beach has the most beautiful greenery—tons of huge hedges everywhere—so we wanted to bring some of that to the reception,” she shares. These natural tones set the theme for the evening. The venue was decorated with touches of green to tie in with the floral arrangements and natural setting.

The couple fused traditional with modern aesthetics through personal touches. Each place setting had napkins, and the cushions in the outdoor lounge area were adorned with the couple’s joint monogram. The bar, which stayed opened late into the night, served Riley’s Rosemary Rye Cocktail, (the couple’s signature cocktail named after their pup), liquor, wine and craft beer (the groom’s request). After enjoying a cocktail hour of libations and passed hors d’oeuvres, which included crab cakes, shrimp cocktail, tuna medallions, smoked salmon, lamb chops and spring rolls, the guests ventured inside to enjoy a seated dinner of stacked, chopped salad, filet of beef au poivre with potatoes and vegetables, and passed desserts. While they had a traditional wedding cake, they also offered s’mores, cookies, cheesecake pops, mini Key lime tarts and more. Caroline and Rascoe radiated joy and love as their guests indulged in food, drinks and dancing. Caroline and Rascoe shared their first dance as a couple to “Crazy Love” by Van Morrison. For her “something borrowed,” Caroline attached a pin of her paternal grandfather’s to her bouquet. After he passed, the pin was given to Caroline’s brother, who kindly let Caroline borrow it for the day. The wedding planner and florist crafted the wedding table. It was a “sweetheart” table that sat between their families and the wedding party. Caroline shared that, “It was nice to be together and have a couple of minutes to ourselves throughout dinner that night.” The couple danced the night away alongside their guests. In the above picture, all Sewanee guests gathered together for a group shot. Cheers to you, Caroline and Rascoe! We wish you many years of happiness and love!