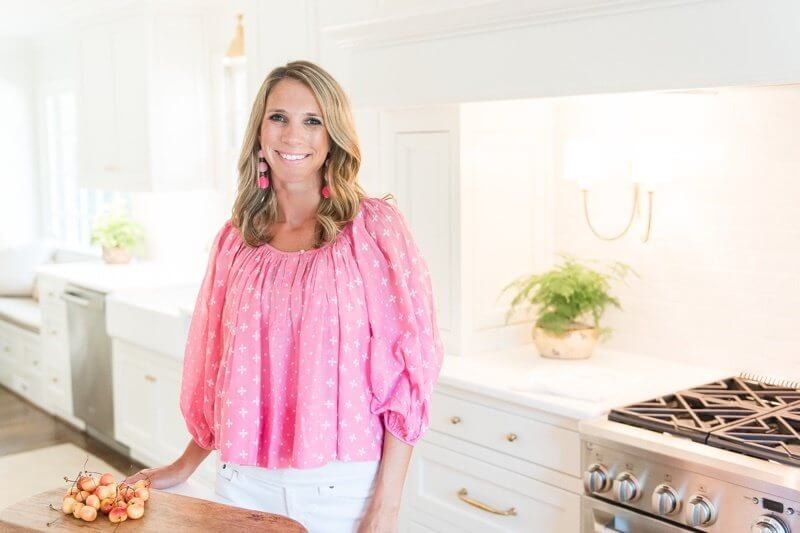 Ashley Mac’s Home Kitchen: A Stunning Before & After

The dichotomy of functionality and beauty is at the heart of Ashley Mac's renovated home kitchen, a luxurious yet laid-back family oasis and dream space.

Seven years ago, Ashley McMakin, founder of Ashley Mac’s, and her husband and business partner, Andy, found their dream home in Mountain Brook — just a stone’s throw from their flagship Ashley Mac’s Cafe in Cahaba Heights, across from a charming neighborhood park, near their kids’ schools and in a neighborhood with sidewalks to boot! Everything about the home was perfect for them, except, ironically, the kitchen. But since Ashley had state-of-the-art kitchens in her cafes and on the condition that one day they could renovate, this passionate cook made the compromise.

And a compromise it was. The tiny kitchen had a few scant patches of counter space, some hardly big enough to fit a cookie pan on. When scarce countertop space ran out, Ashley had to get creative. There were only four drawers in the entire kitchen, so she had to get creative about storage too. “It just made for a stressful space,” says Ashley McMakin, founder of Ashley Mac’s, of her former home kitchen.

Picture Ashley making a lasagna: Pasta is near boiling. She needs to make the ricotta mixture. She dashes into her laundry room-turned-partial-makeshift-pantry to pull out the large Tupperware of kitchen tools, she digs through, grabs what she needs and returns to kitchen to find the water at a rolling boil. She needs to put the things in her hands down, but ingredients fill every countertop. Her kids come in as she needs to dump the scalding water. “OK, guys. You need to get out. Mommy’s cooking!” Her blood pressure skyrockets.

This, in a nutshell, was what home-cooking maven Ashley Mac dealt with for seven years. “It was so small, it would stress me out when people were in there,” she says, recalling sending her kids away. “I couldn’t be a part of the family during dinnertime.”

Ashley found hope in Pinterest, cooking up her dream kitchen, one that made her heart sing and kept her eye on the prize: a future free from the bondage of her tiny, stressful kitchen. She tended to pin images of white kitchens — a clean, crisp look that is traditional yet contemporary, a mix of old and new elements, like old aged brass hardware with modern touches like lucite bar stools.

And in December 2016, the McMakins bit the bullet, acting as general contractor on their kitchen renovation and hiring out the subcontractors. They wasted no time, going straight to kitchen design expert Cyndy Cantley of Cantley & Company as a consultant on the project. Six weeks later Cyndy’s drawings were finalized, construction began in February and ended in March. In four short months, the McMakins went from four to 34 kitchen drawers and 165 square feet to 330 square feet and from frustrated to elated. Before: The old dining room extended into a sitting area, a space that was renovated to feature the kitchen range and hood, as well as the kitchen island. After: What was once the far wall of the dining room space now houses the heart of the kitchen. The new white kitchen is simply stunning. Ashley at work in her favorite room in the house Aged brass from Architectural Heritage provides a timeless feel to the new kitchen. Ashley admits to having a hard time with color, preferring neutrals. But when she saw this pretty coral fabric at King Cotton, she used it for the banquette pillows and kept it in mind when incorporating subtle pops of color throughout the space. 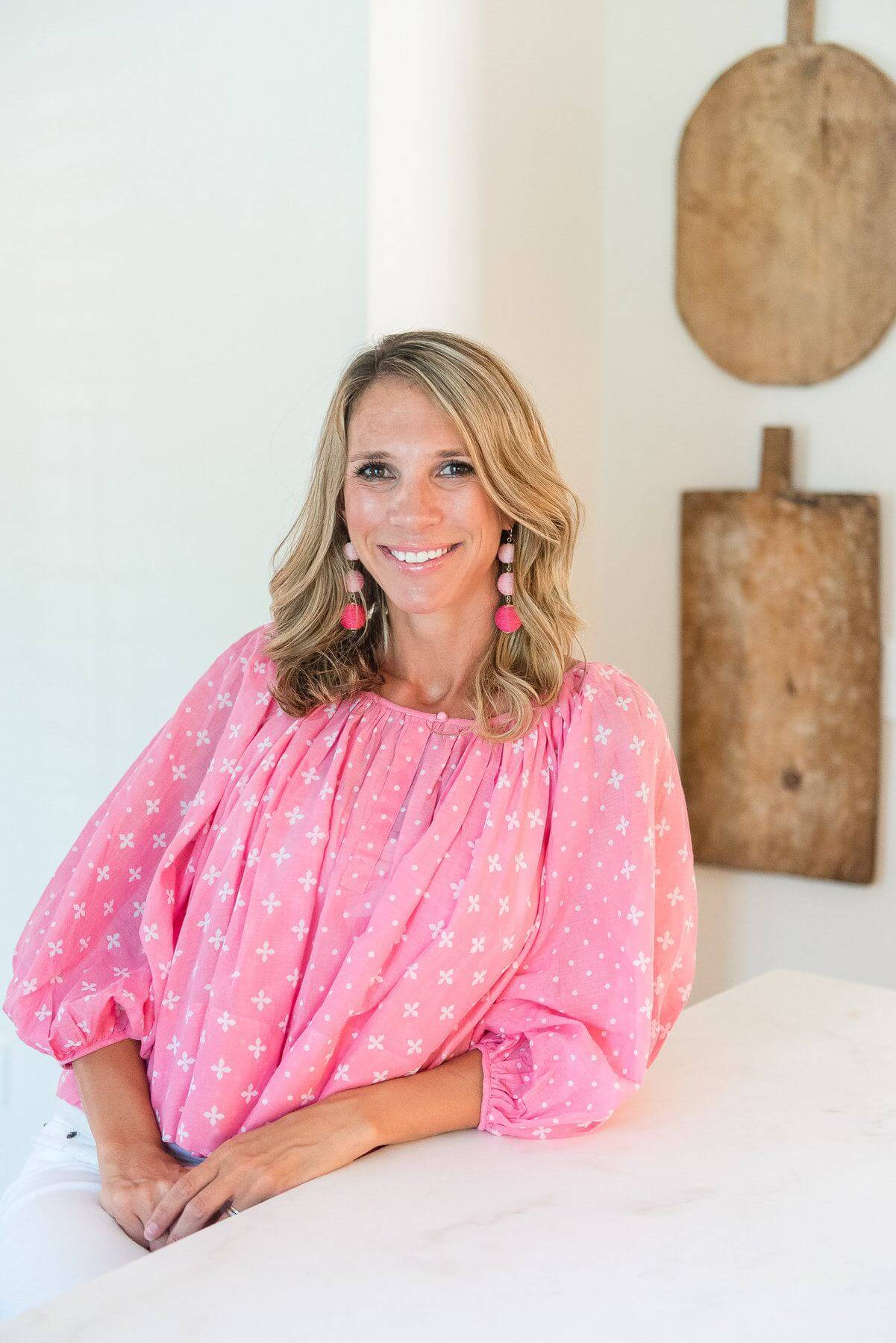 After knowing about Ashley’s former tiny kitchen, one can see why she understands the importance of ready-made family meals and why she created Ashley Mac’s line of “Gourmet To-Go” family dinners.

“It was important to me to be very involved in the process, because of what I do for a living and because I love to cook. And I’ve always dreamed of having a home kitchen that I love,” says Ashley. “And so, because of my Pinterest board, I definitely had a vision of what I wanted, but I didn’t know how to make it all come together. I knew I definitely needed help.” In addition to Cyndy and interior designer Sally May of Sally May Interiors, Ashley was intentional about selecting design experts who would be receptive and collaborative, who would understand the nuanced vision for her home kitchen, while steering her in the right direction.

“I definitely wanted it to be functional — I didn’t want it to just be this beautiful space that looked great, but didn’t really work. I was very much focused on making it super functional, but beautiful at the same time,” says Ashley. The 48-inch range features a smaller oven/warmer, larger oven, six eyes and a griddle (covered in this image). “My kids are obsessed with pancakes, so we use the griddle a lot,” says Ashley. The texture of the hand-cut subway tile has a lovely movement in the light, which Ashley liked, because it didn’t look flat and sterile like a bathroom tile. In her new kitchen, Ashley can be with her kids as she cooks, while they do homework at the banquette or hang out at the kitchen island.

RELATED: Ashley Mac’s: A Passion for Food and People When working from home, Ashley loves to set up her laptop at the banquette and admire her dream kitchen. We love the farmhouse sink, aged brass and hand-cut subway tile — so dreamy!

She took her favorite functional storage ideas from Pinterest — knife-block drawers, spice rack drawers, drawers with built-in dividers — to Bud’s cabinets, and they immediately picked up on her aesthetic, suggesting one of her now-favorite custom cabinetry features, large vertical sheet pan & cutting board drawers in the island. Cyndy was also on the level, drawing in hidden drawers — for oils and vinegars, kitchen utensils and pot holders, all things one needs easy access to while at the stovetop — in the architectural columns that flank the range.

Cyndy also added both Andy and Ashley’s favorite detail, the appliance garage — an oversized cabinet, which houses her food processor, Kitchen Aid, microwave, coffee maker, baking ingredients and more. There’s even a large drawer for Ashley’s favorite Le Creuset pots, pans and bakeware conveniently situated right beside the range. “I love that everything is hidden, but it’s right there where you need it,” says Ashley. “Before, I was lugging all my pots, pans and Kitchen Aid from my pantry space in my laundry room, so, honestly, I just love everything having a place.”

Ashley also loves the unexpected yet pleasant surprises Cyndy brought to the table. “It was not on my radar to do a China cabinet,” says Ashley. “But she drew it into the plans, and I was like, ‘Gosh, that’s beautiful!’ I just loved the way that turned out.” Cyndy also convinced Ashley that she could fit an additional food pantry into a one-foot-deep space, and the result is a super-cool, deceivingly spacious pantry cabinet, where Ashley has organized kids’ snacks and more. Cyndy Cantley drew the China cabinet into the floor plan, and it was an unexpected yet welcome surprise. 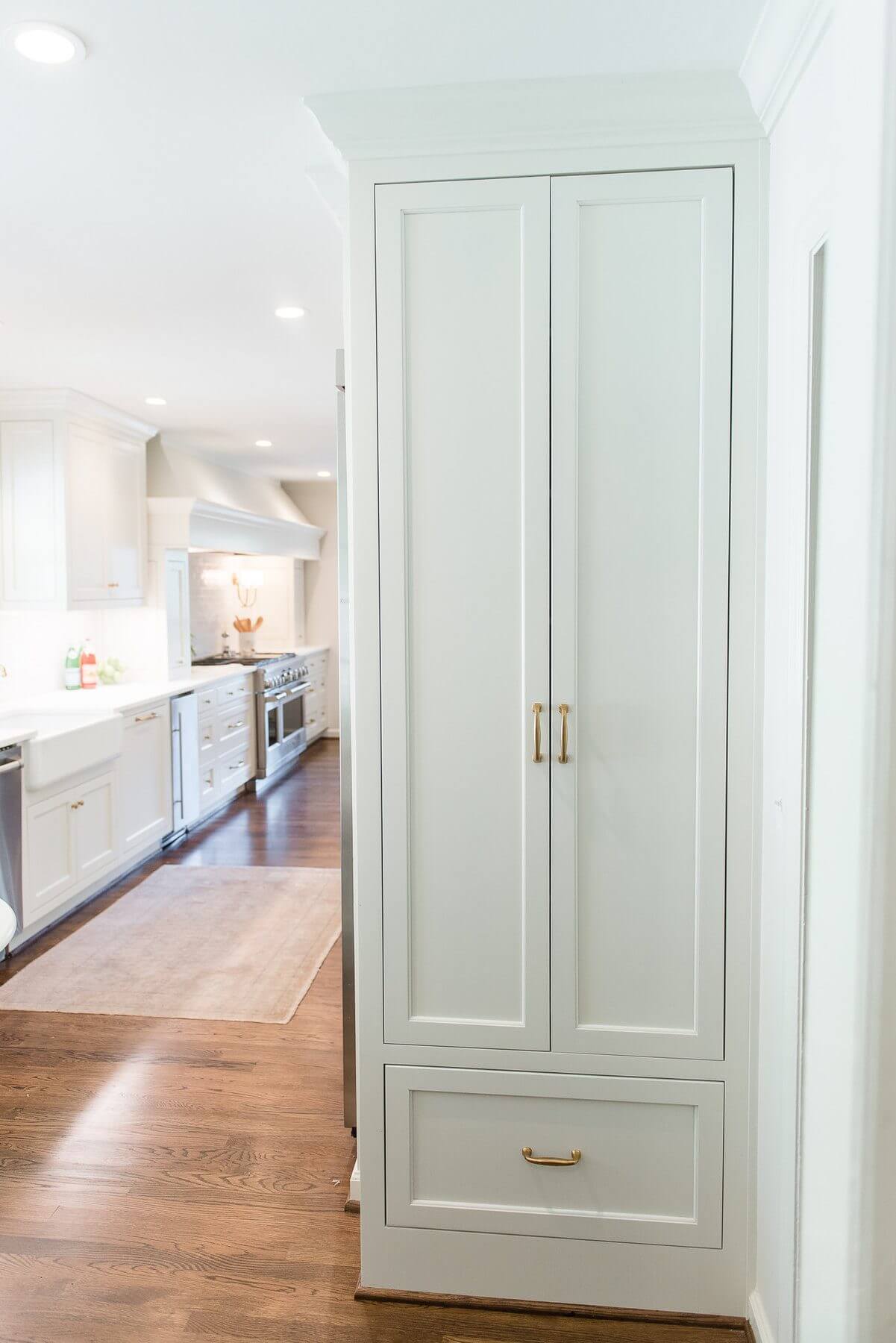 This one-foot-deep pantry at the end of the kitchen miraculously holds a lot of snacks and ingredients, and Ashley has it all organized neatly into categorized baskets. Before: Before the McMakins extended the kitchen to run the entire wall of the home, the range used to be opposite of the new farmhouse sink. Notice how little counter space there was. After: The massive “appliance garage” has replaced the spot where the old range used to be. 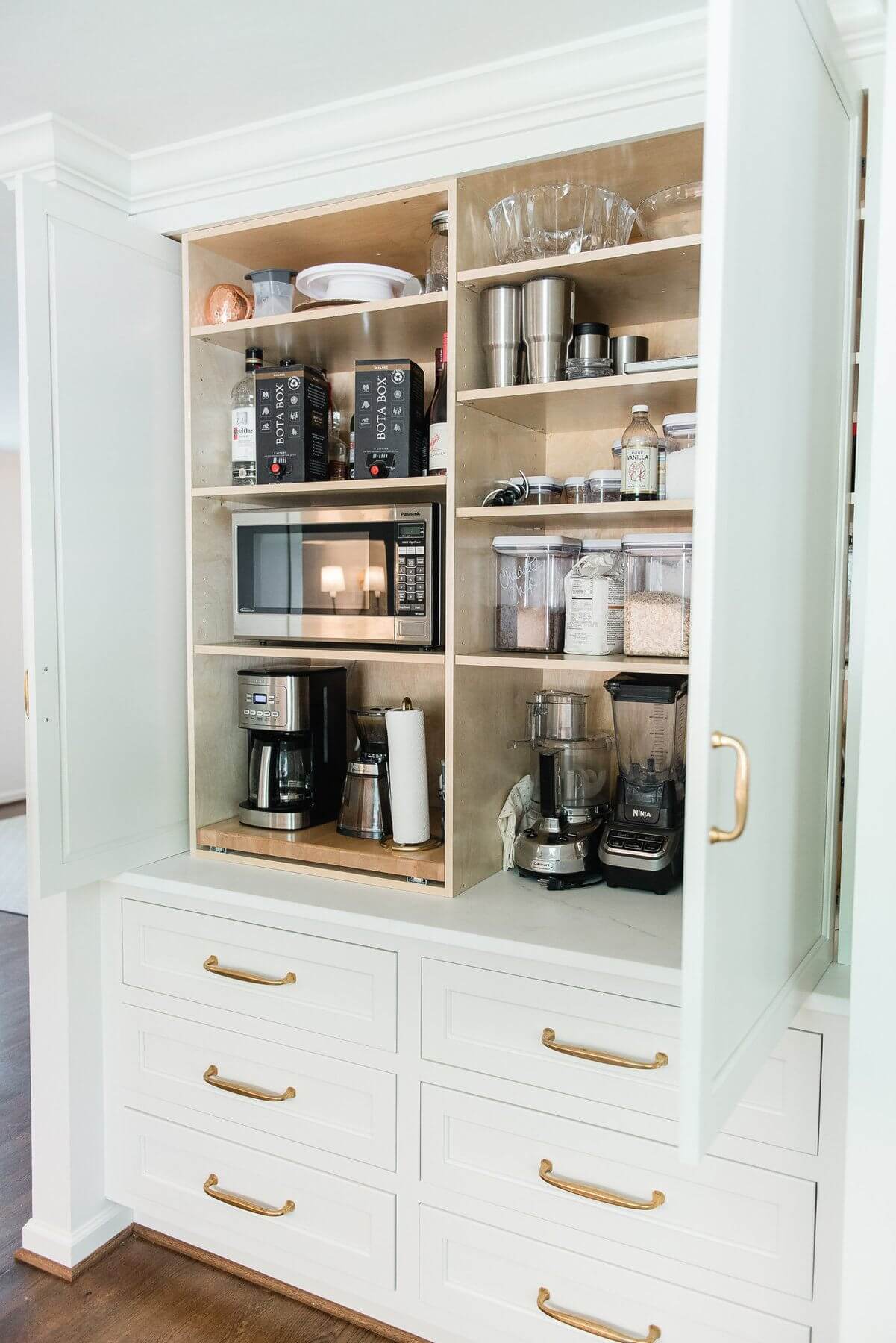 A favorite feature of the new kitchen, the appliance garage holds an impressive amount of kitchen appliances and ingredients. Ashley brought the idea for the knife-block drawers to custom cabinetmakers Bud’s Cabinets, and they parried with the clever idea of the vertical sheet pan and cutting board drawers in the island. 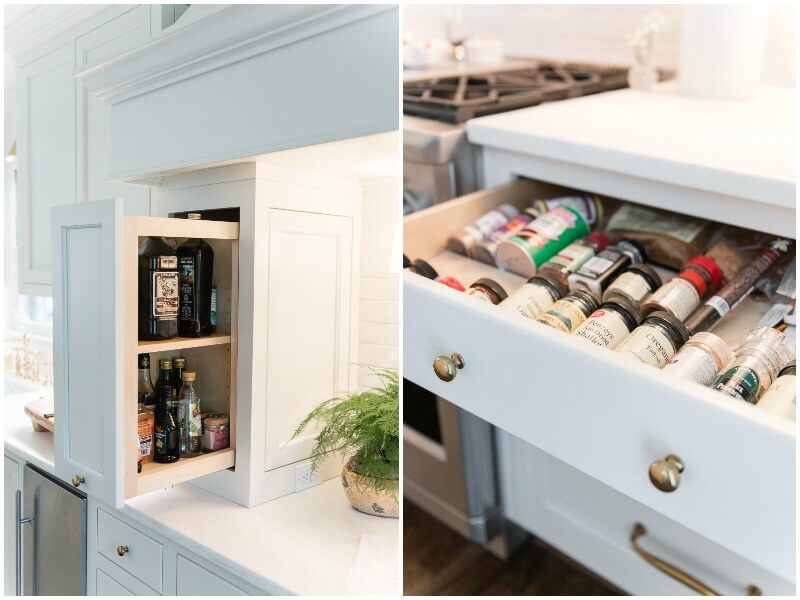 Cyndy included the hidden pull-out shelving on either side of the range, and Ashley asked Bud’s Cabinets to build a spice drawer.

“When Cyndy was working on the kitchen design and drew in the banquette, she was like, ‘I could see you sitting here and working.’ And I was like, ‘That’s a great idea!’” says Ashley. “I remember when it was under construction, that was the first thing I wanted to do. I was like, ‘I can’t wait to sit right there and stare at this kitchen.’” So, these days, Ashley has decided to bring her laptop into her favorite room in the house. Awash in natural light, Ashley not only uses the space as her office, but also as her test kitchen for recipe development and a space for Ashley Mac’s photo shoots for social media.

As she talks about the future, her kids run in from a trip to the bakery with dad, greeting their mom in the gleaming kitchen. “Now, when I’m in the kitchen cooking, the kids are sitting at the kitchen island watching or at the banquette doing homework, so I feel like the family can be together during dinnertime. We just love having the space to spread out and make cookies on the island. It’s just so much more enjoyable than when I had nowhere to put things,” says Ashley. “I cooked a lot in the kitchen with my mom. We’d bake cookies on the island. I grew up getting to do all of that, so it’s fun to now pass it on to the next generation.”

Thank you to Eric and Jamie Gay of Eric & Jamie Photography for today’s beautiful photography!

Thank you to Ashley McMakin of Ashley Mac’s for sharing her beautiful new kitchen with us!