Not sure if you’re on board with this philosophy, but I think there is no such thing as a chance encounter. What seems haphazard is indeed the universe at work. Such was the case when my husband and I ran into Hal Humphreys and Kim Green at one of our Nashville favorite bars, Le Sel. Our common threads run deep as Kim is one of Nashville’s most talented writers and Hal works for my brother-in-law. But where our paths truly cross is our propensity to throw a bunch of interesting people in a room and see what happens. So when I got the invitation to join Kim to meet a posse of women who happen to be writers, I was all in. The company was divine, for sure, but the Tarta de Santiago Kim served was sublime. Hal is hard at work as he measures the ingredients for the Tarta de Santiago.

In my opinion, it is a near-perfect dessert: easy to make (let’s just say Hal has perfected it), elegant and a delicious medley of flavors. But the WOW is in the story of the Tarta de Santiago’s origins. No doubt, it is the dessert du jour at the Green/Humphreys gatherings, and it’s easy to see why. Only seven simple ingredients are needed to create the Tarta de Santiago.

When I asked Kim for a couple of sentences to explain her affinity for this exquisite cake, two sentences became several paragraphs, and once you read them, you’ll understand that it would be impossible to squeeze this compelling backstory into two lines.

Kim shares: “Twice now, we’ve hiked across northern Spain, from the Pyrenees to the northwestern coast of Galicia. For more than a thousand years, pilgrims have followed this route, among others, to visit the remains of St. James at Santiago de Compostela’s storied cathedral. Our motivations were less spiritual, more carnal: We walked for the scenery and camaraderie, the wine and splendid dinners, both simple and sumptuous.

“As the kilometers rolled by at the pace of footfalls, we noticed the landscape and language shift; and with new towns and regions came new varietals and new local cuisines — from the lightly sparkling Txakolina wine and salt cod in Basque Navarre, to Galicia’s crisp Albariños and matchless shellfish. One pilgrim favorite that began showing up on menus a few days before the finish line was the famous Tarta de Santiago, an almond cake decorated with powdered sugar and an outline of a St. James cross. Some bars and restaurants served an uninspiring, bone-dry pre-packaged version, ubiquitous in Santiago’s many tourist shops. But whenever we spotted “tarta de Santiago — casera” (homemade) on a menu, we snapped it up. The cross of St. James adds a decorative element to the cake. Ever so carefully, Hall lifts the cross of St. James from the cake. “Back in Nashville, we were craving the tastes of the Camino. So we cooked up a scheme with Josh Habiger to co-host a Spanish feast — a multi-course extravaganza that included all of our favorites: garlicky Basque ajoarriero, grilled razor clams and tender pulpo a la gallega — boiled octopus, served with olive oil and paprika. A Galician friend moaned as she put a bite of octopus into her mouth. ‘Just like home,’ she smiled.

“For dessert, we turned to local pastry goddess Lisa Donovan for help. The result was spectacular: a beautiful and delicious almond cake that demolished even the memory of those dessicated boxed pastries sold to unsuspecting pilgrims in Galicia. So we resolved to make our own tarta — with a little advice from Lisa and the help of an easy recipe from Epicurious. This version has stopped conversations at more than one dinner party. You cannot mess it up, and it never fails to impress.”

So this Thanksgiving, we’re thankful that Kim and Hal shared this unbelievable recipe with us, and we’re passing it along to you. Serve this at your holiday meal — or anytime, really — and you’ll have an interesting tale to share of its origins. Not only does the tarta make a dramatic statement, your guests will think you’ve spent hours in the kitchen.

Print
Prep time
30 mins
Cook time
40 mins
Total time
1 hour 10 mins
Pilgrims who make the trek to great Cathedral of Santiago de Compostela in Galicia, where the relics of the apostle Saint James are believed to be buried, see this delicacy in local bakeries and restaurants in Spain. Moist and delicious, the Tarta de Santiago will not disappoint with its lovely hint of orange, almond and sweetness.
Author: Epicurious
Recipe type: Dessert
Cuisine: Spanish
Serves: 10 persons
Ingredients
Instructions
Variations
3.5.3226 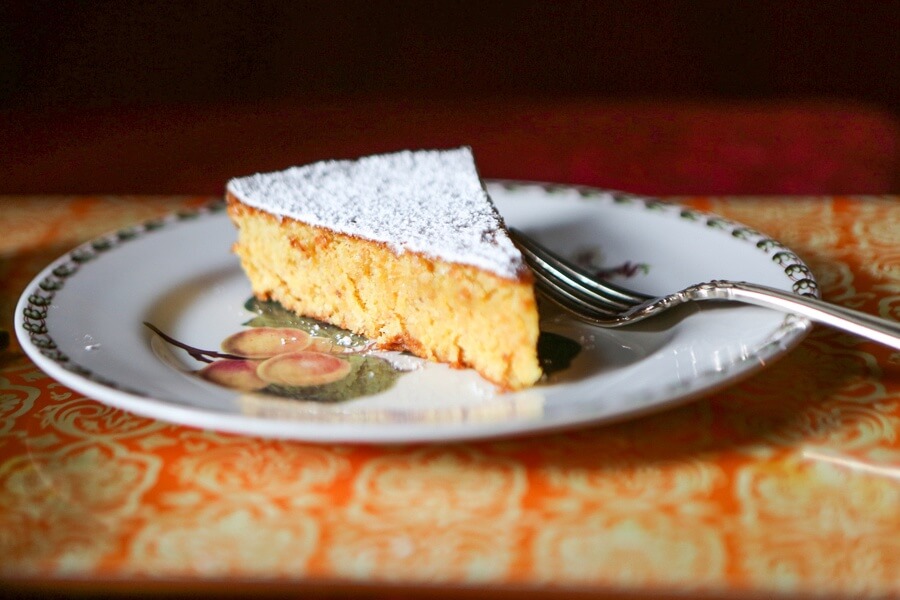 Bon appetit! A heartfelt thank you to Hal and Kim for generously opening their home to StyleBlueprint.

Have a wonderful Thanksgiving holiday and enjoy your slice of Tarta de Santiago!

Thank you to Leila Grossman of Grannis Photography for the gorgeous photos. Yes, the holidays are upon us. Do yourself a favor and get ahead of the frenzied nature of the bustling season, and order a gift sure to be appreciated by all! This Southern Coffee Trio, for just $39, was hand-picked because we’re fans of each Southern roaster. King Bean, from Charleston, SC; Revelator, from Birmingham, AL; and Bongo Java, from Nashville, TN. Order this gift box today (or several): Click here for details!