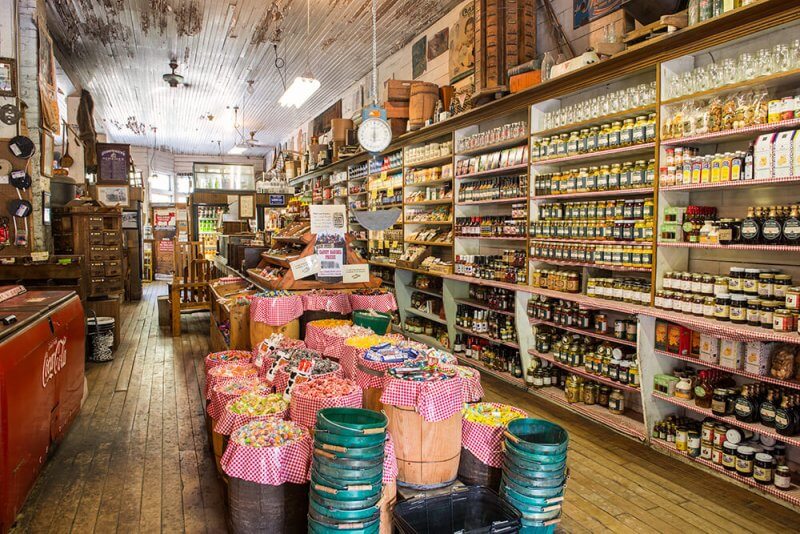 The History of the South’s Beloved Mast General Store

The first Mast General Store opened in 1883 and sold everything from cradles to caskets. Today, the store has 11 locations across the South that strike a clever balance between old and new, nostalgia and utility. Here's why Mast General belongs on your next road trip route!

As eager travelers map out their next great adventure, many choose to explore the United States via road trip. If you’re in need of a little inspiration for your next route, consider adding the Mast General Stores to the list. With 11 locations peppered throughout North Carolina, South Carolina, Tennessee, and Virginia, each storefront has its own unique history and character. Now a destination for everything from preserves and old-fashioned candies to apparel and high-end outdoor gear, Mast General Store is a Southern institution with a storied past.

Originally opening under the name The Taylor General Store in 1883, the first Mast General Store in Valle Crucis, NC, was started by a local clock salesman named Henry Taylor. Henry owned a smaller store across the street and needed to expand his offerings. When you visit the original location today, keep your gaze downward — you can see the exact spot on the floor where the expansion began in what is now dubbed “The Middle Room.”

Fourteen years later, Henry sold half of his interest to William Wellington Mast, renaming the store to the Taylor and Mast General Store. Henry eventually sold his remaining shares to William, who adopted the slogan “If you can’t buy it here, you don’t need it.” Offering everything from cradles to caskets (yes, caskets), William wanted the store to carry anything and everything his neighbors might need. The store also became one of Standard Oil’s (now known as Esso or Exxon) longest-term retailers. Mast General Store used to extend credit to anyone who needed it in addition to offering trades. When you wander to the back of the original store today, you can still see hatch doors in the floor where chickens were often traded.

Mast General Store stayed in the Mast family for three generations until it was sold to a doctor from Atlanta and a professor from Appalachian State University in 1973. In 1977, the store closed for the winter with hopes to reopen in the spring, but Mast General Store didn’t reopen until the summer of 1980 after John and Faye Cooper purchased it. It didn’t take long for the store to regain its reputation as “the store that had everything.”

“My parents took trips and brought us up here as young kids to go skiing,” says Lisa Cooper, daughter of John and Faye and the current president of Mast General Store. “They happened across the old general store when it was operating in the early 70s. My dad fell in love with the store, and when he heard that it shut down, he took a leap of faith and decided to sell everything, purchase the store, and move us on top of it.”

RELATED: 5 Southern Road Trips to Add to Your Bucket List

After moving their family to the top two floors of the general store, John and Faye revamped the store while still honoring its rich history. Lisa says they honor the store’s past through its merchandise, carrying beloved products from brands like Smith’s Rosebud Salve and Charles Chips — items that transport customers back to their younger years. “We hook [customers] as kids in the candy store, and then we get them back for the retro candy they love — the Goetze’s Bulls-Eyes candy and the Lemon Drops. It’s a mix for everybody,” says Lisa. Not only does the original Mast General Store in Valle Crucis, NC, have its own zip code, but it also houses a post office and offers five-cent coffee on the honor system. “One of the store’s slogans used to be ‘We have everything from cradles to caskets,'” says Lisa Cooper, daughter of John and Faye Cooper and the current president of Mast General Store. “We don’t have cradles or caskets anymore, but we sell everything in between … we have something for everyone.” While each of the 11 Mast General Stores has a unique history, Lisa says the original storefront in Valle Crucis remains the most unique. When people come to visit, they’ll find original elements of the store, including a wood stove that is still in operation and a beautiful knife shop that used to be a feed room.

Lisa adds that she understands the store’s need to evolve and offer relevant products for the next generation. For a long time, the store’s toy section did not offer any products with batteries. Only when Lite Brites and the game Simon became “retro” toys did the store add them to their collection. Lisa says it’s about finding that perfect balance between old and new products.

RELATED: 8 Places You Won’t Believe Are In the South You don’t want to miss the ‘Candy Barrel’ department in the original Mast General Store, where you can choose handfuls of your favorite vintage candy and pay for it by the pound. Despite its change and growth over the years, Mast General Store’s mission remains the same. “What really stands out is what my parents were able to do coming into a small family business and creating a culture that is very employee- and community-centric,” explains Lisa. “Carrying that forward has made a difference as a company that cares about doing the right thing. When we open in a new [location], we want to work to make it a better [place] and be involved in the community.”