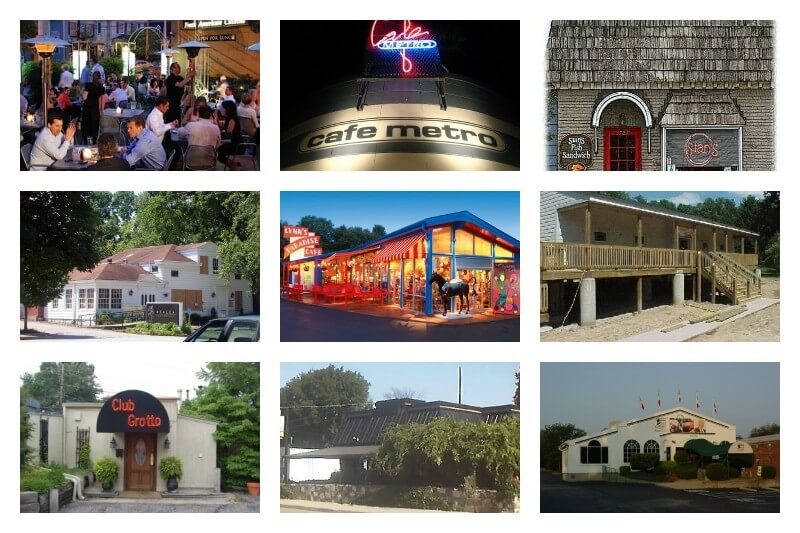 We recently asked our readers what Louisville restaurants they miss. The answers will take you down Memory Lane and likely stir up your appetite!

What restaurant do you miss the most in Louisville?

We recently posed this question to our readers, and the response was huge! For this is a town with wonderful restaurant options and delicious food in general. Unfortunately, many beloved restaurants have closed and, quite frankly, are irreplaceable. Perhaps in revisiting these ghosts of restaurants past we will provide a touch of nostalgia and maybe, just maybe, the momentum needed to consider a reopening? Pretty please?!

Walk with us down Memory Lane as we remember the 10 most missed restaurants in Louisville (according to our readers):

The most popular response on the list, this restaurant had it all. A wonderful menu, perfect patio, great bar, a private room, and it was good for both lunch and dinner. I still dream about their salmon, their cosmopolitan and their calamari. People would order dessert just to get the almond lace basket filled with ice cream. It was a perennial favorite for special occasions, especially after Oaks or Derby. It was also always the place to see and be seen. If this restaurant ever does return, it will not be in the same location, as the new restaurant Mesh, from Indianapolis, is currently under construction in this spot. Some of the best fried chicken in town was from this little restaurant on the river. With its gravel parking lot and very “basic” beginnings, it was a Sunday dinner tradition for more than 30 years, and the carryout business seemed strong, as well. Sometimes the wait was 45 minutes to an hour for the freshest, hottest chicken and Chick’s Chips (sliced fried potatoes). The insider tip here was that it was probably one of the best places in the city to get a cocktail, with freezing cold beer and strong mixed drinks. After a terrible fire that gutted the building in 2002, it was renovated, and while the ambience was not quite the same (it was just too fancy), the food remained strong. The closure of the Harrods Creek Bridge hurt the business substantially, which led to Chick Inn’s demise in 2010. The Chick Inn, pictured here in the midst of its renovation, enjoyed a strong following. Photo credit: lichtefeldinc.com

Speaking of great patios, Avalon had a great patio setup that El Camino has now inherited. With a vast space right on Bardstown Road, the people-watching, cocktails and food were top-notch. Favorite dishes here included the deviled eggs, the lobster mac ‘n’ cheese and the calamari. The happy hour here was legendary, with all drinks half-off and $5 appetizers. On a nice night, it was nearly impossible to get a table on the patio for happy hour. Avalon was owned by Steve Clements, who also owned Clements Catering and operated the Derby Museum Cafe. All of these businesses closed unexpectedly in 2012. Brasserie Deitrich’s was owned by local restaurateur Bim Deitrich. Deitrich also owned Allo Spiedo down the street. It was these two restaurants that spurred the mass development of restaurants and bars along Frankfort Avenue. The Caesar salad with those homemade croutons, the hamburger and the cheesy potatoes are all top reasons to miss Deitrich’s. But what Louisvillians really miss is its great sidewalk bar, that could be open-air in good weather. It was the type of bar to get a drink whether you were wearing your shorts or a ballgown. This restaurant was in the former Crescent Theater on Frankfort Avenue, the movie house in Crescent Hill.  In the 1980s, the theater became a “blue movie” (adult xxx) establishment. When Deitrich’s took over the space, locals would joke that they were going to have a drink and dinner at the “Blue Movies.” Also owned by Bim Deitrich, this was the sister restaurant to Brasserie Deitrich’s, but with a much more casual atmosphere. Known for its wonderful wood-fired pizza, this restaurant, which was housed in a former fast-food joint on Frankfort Avenue, was a popular place every night of the week. Not just a pizzeria however, they had wonderful grilled fish, meats and vegetables, too, that they served with homemade foccacia. Grisanti’s and all its restaurants are so, so missed in Louisville. Casa Grisanti opened in downtown Louisville in 1959 as a fine-dining establishment, complete with white tablecloths and tuxedoed servers who finished cooking your meal at the table (similar to Vincenzo’s today). Mamma Grisanti’s was a more casual Italian restaurant located in DuPont Circle. Ferd Grisanti’s, another nice Italian restaurant, opened in 1973 in Jeffersontown, and was the final restaurant owned by the Grisanti family in Louisville. Considered the gold standard in the 1980s, these restaurants were the training ground for so many of today’s great Louisville chefs. Chefs including Vincenzo Gabriele (Vincenzo’s), Dean Corbett (Corbett’s, Jack’s, Equus), Steve Clements (Avalon/Clements Catering), Dominic Serratore (Ditto’s), Matthew Antonovich (Mozz) and many more, all had their starts at a Grisanti restaurant. The Courier-Journal has many of Ferd Grisanti’s recipes here. When this establishment opened in the early 1980s, it was one of the most upscale restaurants on Bardstown Road. This was the fancy sister of Uptown Café, also on Bardstown Road, and a favorite for a nice business or ladies’ lunch. The French food was fantastic, but the desserts were divine. The Napoleon was always my treat. Club Grotto was fine dining without all the pomp and circumstance. This family-run restaurant had its share of tragedy, when the founder and chef Jim McKinney passed away unexpectedly. His parents took over the restaurant and the whole community mourned with them.  Club Grotto had a wonderful salad with cantaloupe, chick peas and artichoke hearts that I crave to this day. They also had the best selection of sides in the city: corn pudding, whipped potatoes, sweet potatoes, spinach and the wonderful mushroom strudel. Logically, this restaurant should top the list. But there is still hope that someone is just going to open the doors and we can all walk back in, because it’s still just as it was when it closed unexpectedly a couple of years ago. What this restaurant did with eggs is unmatched, especially the Popeye omelet and the Breakfast Burrito. And the grits. And the Bloody Marys. Sigh. Breakfast is just not the same. They still have their website up, just to let your taste buds reminisce. Memories can be found at www.lynnsparadisecafe.com. It was a dark day when Stan and Lelia Gentle shut down Stan’s Fish Sandwich. But they resurfaced, cooking the fish for Immaculate Conception Church’s Fish Fry in 2014, so that people could still get their fish fix. The fish was always fresh and made to order. The grilled fish sandwiches. clam chowder, crab cakes and shrimp burger were also huge hits. Look for the Gentles this Lenten season. Relish: Relish was started by Susan Seiler. What started out as a small lunch place quickly turned into a sit-down lunch and dinner restaurant, and the food was fantastic. See our post about Relish here.

L&N: Wonderful wine and great food paired with a quaint house setting on Mellwood Avenue made this restaurant a favorite. This is now home to Bistro 1860.

Baxter Station: A Highland’s neighborhood was left without its home base when Baxter Station unexpectedly closed in 2013 due to tax problems. We all miss the great beer selection, calamari and goat cheese salad.

Lentini’s: Local Italians swore by the “gravy” at Lentini’s as being the most authentic in town. This Bardstown Road mainstay since 1962 shut down shortly after selling the restaurant to new owners.

Don’t know about you, but we are hungry now. And a little nostalgic! Onward, though, fair readers, as we look forward to all of the new restaurants on the horizon in our fantastic foodie town.