Kay West joins us each month to highlight a favorite restaurant that is deserving of the buzz. This month, she brings us to Sinema and highlights some favorite dishes while embracing the history of the location as well. Years before I fell in love with a real boy, I was infatuated with Clark Gable, Humphrey Bogart, Spencer Tracy and Cary Grant, and mesmerized by Lauren Bacall, Katherine Hepburn, Carole Lombard and Grace Kelly. I met these larger-than-life legends of the silver screen on a 12-inch black and white television in the tiny kitchen of a rental home in a small town south of Philadelphia where I spent one weekend a month with my grandparents. During baseball season, Alton [my grandfather] sat at the table next to the window listening to the ever-frustrating Phillies on the radio. At night, after the dinner dishes were washed and I was in my pajamas, Ethel [my grandmother] let me stay up late and watch classic movies with her, filling me in during commercials on the earthly romantic entanglements of these other-worldly cinematic creatures. In Wilmington, DE, where my family lived, there was still a grand 1930’s movie theater downtown; my mother recently told me that when she went to see a matinee one day in the early ’60s, the theater manager would not sell her a ticket because she was wearing slacks. Undeterred she ran next door to Wilmington Dry Goods, bought a cheap skirt, put it on in the dressing room and was in the theater in time to see the opening credits of Cleopatra.

Like thousands of movie palaces of that era, many of stunning art deco design, the Wilmington theater is long gone and generations of filmgoers have grown up with their only frame of reference the truly dreadful multiplex ice cube tray model.

I moved to Nashville in time to attend a couple of events at the Tennessee Theatre on the street level of an 11-story art deco Warner Building on Church Street; the neon marquis was nine stories high. History, architecture and theater buffs were devastated when the entire building was razed in the late ‘80s.

Somewhat surprisingly, three historic theaters in Nashville have escaped the wrecking ball, though only one, The Belcourt, is still showing movies. (As an aside, I insist you see ‘Boyhood’ there while there is still time.) The Belle Meade Theatre, opened in 1940, has seen several transformations since the projectors came to a stop in 1991 and is now occupied by Harris-Teeter, which at least preserved the exterior.

The Melrose Theatre, considered Belle Meade’s sister, opened in 1942 on Franklin Road as part of a strip center anchored on the other end by Melrose Lanes. After it stopped operating as a theater, it was the longtime home and production facility for video pioneer Scene Three. In 2005, the principals announced a partnership to develop the property into apartments, restaurants and upscale retail. Not long after the bowling alley was demolished to a hole-in-the-ground and The Sutler was forced to close, various tax and legal snafus over the years kept everything in the compound dark with the exception of the subterranean smoke-pit Melrose Billiards.

Barely two years ago, it was announced that the seven-acre site was finally under contract for the construction of 220 apartments and the resurrection of the theatre into an 8,000-sq-ft restaurant on two levels.  Construction began as details emerged, including the power team behind the theater revival–Ryman Hospitality Properties CEO Colin Reed, his wife Brenda, their sons Ed and Sam, Austin Ray (ML Rose), and Q-Juan Taylor, a 20-year hospitality vet. Top Chef runner-up and Chicago restaurateur Dale Levitski was bringing his talents to Nashville; Kathy Anderson would be the interior designer responsible for the downstairs dining room and bar, the lounge and private dining on the second level. (Check out this first floor ladies room, fit for a legend.) Sinema had its world premiere on June 27, 2014, and all it lacked was a red carpet and paparazzi. Walking past the restored ticket booth outside, through the original theater doors and into the stunning lobby is like stepping back in time to another era. The round, white settee is the perfect place to strike a retro pose and enjoy a glass of wine or a craft cocktail. The hostess stand at Sinema with the round, white settee to the right. Image credit: Ashley Hylbert The pink one in the center—How Rande Met Cindy—is an insider nod to Cindy Crawford and her husband Rande Gerber and a refreshing shake of vodka, St. Germain, lemon and a kick of cayenne pepper. Image credit: Ashley Hylbert

Taylor—known simply as Q and whose movie star looks and suave manners make him the perfect leading man–sets the tone for the front of the house, gliding smoothly from the plush main dining room with banquettes and a smaller area of intimate upholstered booths and the lively lounge on the second floor, accessed by this gorgeous staircase. 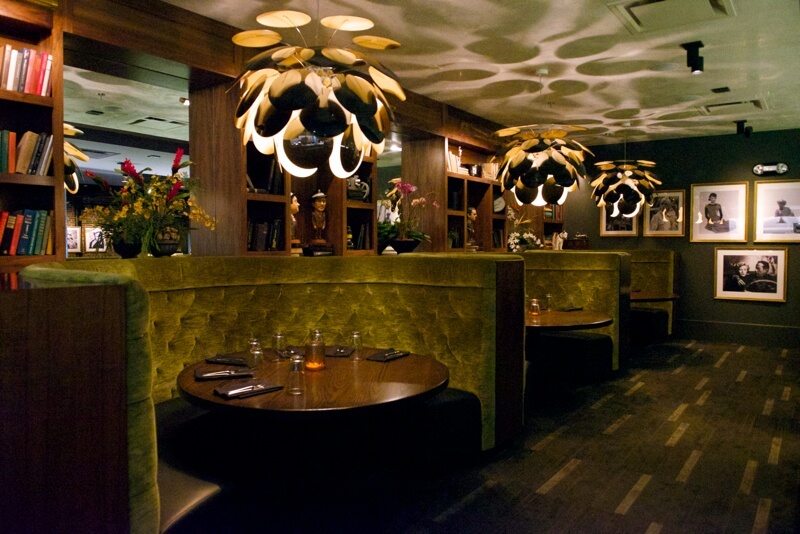 The staircase is grand when you first enter Sinema. Image credit: Anthony Matula. The balcony is a fabulous destination of its very own with this swank half-moon bar set against exposed brick walls. Image credit: Ashley Hylbert.

There are many inviting gathering places for schmoozing, boozing, and noshing on what Levitski whimsically calls ‘Concessions.’ Sip on a Ringo & Honey Bunny here with music icons, an Hasta La Vida across from the bar, or a P.S. I Love You over some discrete canoodling in small nooks tucked into corners. Most of the pick-up, no cutlery concession menu is unique to the lounge, like pickled house chips, corn nuts, house frites and a cheese or meat plate. But a few are taken from the main dining menu. Bella Bakery—the new bakery opened in East Nashville by the couple behind the terrific Bella Pizza in the Farmers Market—provides the bread for two of those. An orb of creamy house ricotta specked with a bit of black sea salt gets a scatter of bourbon bacon and a smear of pureed broccoli. The concessions menu includes such options as this house made creamy ricotta with bourbon bacon and pureed broccoli. Image credit: Ashley Hylbert

Toasted slices are the foundation of two types of the open-faced sandwich known as tartine, one with shaved strip steak, plum mustard, sliced plum and pickled cremini, the other with mashed charred zucchini, radish and white anchovies. You know you’re eating with food professionals when you can’t stop remarking over the kitchen’s knife skills! The tartine dish on the concessions menu at Sinema. Image credit: Ashley Hylbert

Diners downstairs have more elaborate introductions to Levitski, who says after 15 years in Chicago he was ready for a change and loves the stage Sinema provides. “Nashville is a new adventure for me and I’m a new adventure for Nashville,” he says with a laugh.

As long as it is on the menu, I will start every culinary adventure at Sinema with Seaweed, Levitski’s mad marriage of Vietnamese pho and Japanese shabu-shabu that he created after a trip to the Cayman Islands with chefs from Le Bernadin. The presentation is highlighted by a table-side pour of neon green seaweed broth into the pristine white bowl. We fought over the exquisite fried lotus. Hiding under the leaves of Thai basil is lump crab, shitake mushroom and beef carpaccio. It is a defining, unforgettable dish. We balanced the ethereal with the earthy in this presentation of octopus, the tentacles marinated overnight, then flash-fried, a process that renders it tender and crisped, atop a tangy German-style potato salad of fingerlings, Picholine olives and fennel with a swipe of squid ink. Everyone who has dined at Sinema will steer you to the Barramundi, and Levitski confirms that it’s the most popular dish on this menu. We loved every element of this solid dish—a perfectly cooked block of meaty white fish, the crackling, salty skin and strew of briny capers offset by a dab of dill aioli and segments of sweet orange, atop a trio saute of potato, kale and leek. Barramundi is currently the most popular dish at Sinema. Image credit: Ashley Hylbert.

Levitski calls the Surf-N-Turf his ode to ‘big food’ and lusty appetites will revel in its old school indulgence–a 12 ounce NY strip encased in char and ringed with fat and three succulent Gulf shrimp scampi atop a buttery Parmesan hash of creamed sweet corn with kale. Levitski’s Puttanesca is a deconstructed version of the classic Italian pasta dish; rather than tossing a bowl of spaghetti with the earthy sauce of tomatoes, olives, anchovy, capers, Levitski composes a linear display of house-made agnolotti filled with that dreamy ricotta, blistered cherry tomatoes, grilled sliced summer squash, whipped eggplant and rounds of fried green tomato. 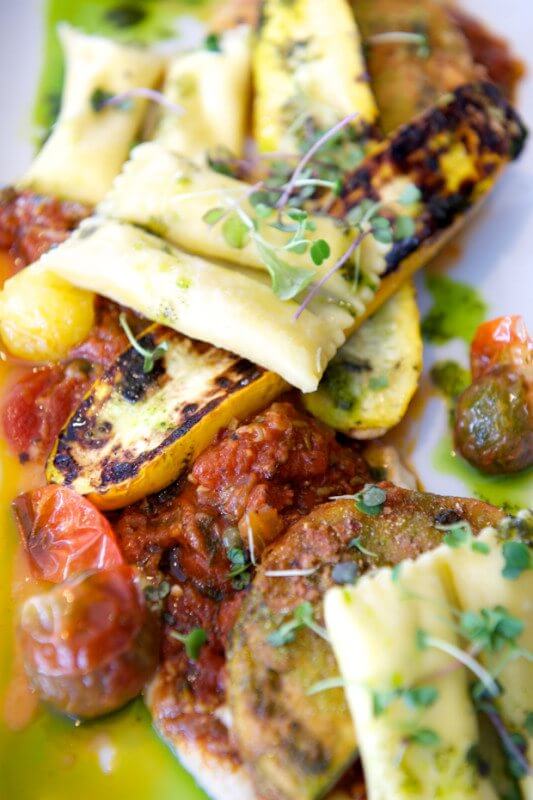 There are a half-dozen desserts, which will be as seasonal as the main menu. This beauty is the Grasshopper and we hope it’s a keeper. Who doesn’t love the chocolate –mint combo? The Carrot Plum Cake gave us an early taste of fall, just around the corner. Image credit: Ashley Hylbert

While many celebrity chefs lend their name and ideas to a project but are scarce in the restaurant, Levitksi is hands on, on site, in the kitchen six nights a week, aided by two other Windy City transplants, Kyle Patterson and Alex Leibow. Of note: Sinema will add Sunday brunch next month.

Those Saturday nights in the kitchen with Ethel played a major role in propelling me to New York City after I graduated high school. Like millions of other starry-eyed small-town escapees, I found that life in NY wasn’t all fabulous parties in swanky apartments, engaged in witty repartee with gorgeous people in cocktail dresses and dinner jackets. But it had those moments and they were glorious indeed.

We owe the team behind Sinema a big round of applause for not only preserving a bit of history, but breathing new life into this treasure. It is both an homage to a glamorous and sophisticated past and an energized, vibrant presence in the new Nashville’s diversifying nightlife portfolio.

Photos today were supplied by Sinema and also photographed for StyleBlueprint by the talented Ashley Hylbert. Kay West is a freelance writer who began her career in journalism in Manhattan, then moved to Nashville in 1981 to work in the music industry before returning to writing. She became one of the three first writers for the Nashville Scene in 1989, and was their weekly restaurant critic from 1992-2007. For the last 28 years, she has written for local, regional and national publications, as well as for the music industry. She continues to write features for the Scene and Nashville Lifestyles, covers restaurants for StyleBlueprint, and is Nashville correspondent for People Weekly/People Country/People.com.