2 Restaurants Everyone is Talking About: Peninsula + Cafe Roze

First impressions of Peninsula and Cafe Roze, two East Nashville eateries, left us nothing short of impressed. Here's why ...

New restaurants pique our interest for a variety of reasons — a well-known chef, new-to-Nashville cuisine and stunning interiors. It is the latter two reasons we moved Peninsula and Cafe Roze, respectively, to the top of our must-try list. On the city’s ever-growing list of new restaurants, these eateries seem to be on the tips of everyone’s tongues, and we had to see why. We sat down to get a first impression (yes, there will be a second) and to learn from each owner about their concept. We went in with expectations surrounding the food and interiors and left raving about the entire experience. Now, just like everyone else, we can’t stop talking about these eateries. Hear what we have to say! The Iberian Peninsula is a culinary crossroads influenced by cultures, not limited to Phoenician, African, Arab and Greek. A culinary journey from the Pyrenees to the Atlantic Ocean will introduce you to the many influences on the region’s cuisine, as will a journey through the menu at East Nashville’s Peninsula. Co-owned by Chef Jake Howell, General Manager Yuriko Say and Bar Manager Craig Schoen, Peninsula opened four short months ago. The trio made the trek from Seattle, where they worked together at The Walrus & The Carpenter. “We weren’t super stoked to be in Seattle and saw the small-business opportunity in Nashville,” Craig tells us. He attributes small-business success to low labor costs and the welcoming community in Nashville. “Nashville’s restaurant community is incredibly tight, and there is a healthy competition. If you don’t support other restaurants, you are alone on an island,” he continues. “I went to college in the South, so I always knew how much more hospitable people are here, but I am still amazed by the help and support from the community in Nashville.”

Peninsula promises a menu showcasing the cuisine of the region (which includes Spain, Portugal, France, Andorra and Gibraltar), with the convergence of the Spanish, Portuguese and French influences as the driving factor. “We love eating in Europe and the minimal use of spice in this region. We use pimentón, salt and pepper, and our dishes are ingredient-focused,” Craig tells us. Chef Howell is plating stories, and Craig and Yuriko are at the ready to assist in the storytelling. Our favorite story came in the form of escargot, grilled leeks, a soft egg and pimentón in a chorizo sauce. “Jake and I looked into what people were eating in Spain and Portugal 180 years ago, and it is not that different from what people were eating in the interior of the United States. Everything that was foraged and hunted would go into one pot,” he explains. “It makes things really interesting when you start looking at new combinations.” While each dish showcases the rich heritage of the region, there is a modernity that brings the meal into the 21st century.

One might expect seafood to be the focal point at a Mediterranean-focused restaurant, but meat and vegetables abound. Between myself and four friends, we shared eight of the menu’s 18 dishes. Olives and warm bread with whipped butter got us started. Equally as noteworthy as the butter is the grilled romaine with pistachio, buttermilk and idiazábal — namely the buttermilk (which we could eat by the spoonful). It wouldn’t be a culinary trek through Spain without a serving of Serrano ham, in this case, served with grilled bread and more whipped butter. Next up: the aforementioned escargot and braised rabbit. Easily my favorite dish on the menu (yes, it even surpassed the butter), the braised rabbit is served in a garlic broth. Word to the wise, don’t split this dish. Save the serving of braised rabbit for yourself and sop up the broth with any leftover grilled bread from the first course. From here, we went back to the drawing board. Not because we were still hungry, but because we couldn’t help but expose ourselves to more of Chef Howell’s creativity in the kitchen. Two final dishes, recommended by Craig, concluded our feast: chicken thigh and squid ink pork shoulder — both salty, both delicious.

“We are bringing people slightly outside their comfort zone,” Craig tells us. “We need to talk people through every aspect of our menu from wine to booze to food.”

The décor plays second fiddle to the food. The 35-seat restaurant sits on the ground level of The Eastland, an apartment complex on West Eastland Avenue. An unassuming design is marked by large windows, church panels, chairs from Tennessee farmers, high ceilings and rustic finishes. “We want people to feel comfortable, but we want them to focus on the food, the booze and the wine,” Craig tells us. The atmosphere is a comfortable backdrop to the creative cuisine, and Craig and Yurkio make for a warm, welcoming crew. Chef Howell has mastered the art of a good broth, which is evident in the braised rabbit dish. Image: Peninsula Nashville The 35-seat restaurant sits on the ground level of The Eastland, an apartment complex on West Eastland Avenue. Image: Peninsula Nashville

Last July, Cafe Roze quietly opened on the corner of Porter Road and Greenwood Avenue. But news of the new eatery didn’t stay a secret for long (thank you, Instagram). The pale pinks and minimalist design became backdrops for photos shared by locals and tourists, and word spread quickly. “It is a bright, airy space that works well from daytime to nighttime,” owner Julia Jaksic says. “It took me a year to find the space; I wanted something more intimate because that is what I was comfortable with in New York. The design started unfolding one thing at a time. Roze means pink in Croatian, so that color is in the space, but we also kept things masculine with hard surfaces and neutrals. When the light dims down and the neon sign casts a pink glow to everything, the space is beautiful. That is what I love about the space — during the day it feels one way, and at nighttime, it feels completely different. I did everything myself, so this project has been really personal for me.”

Soft and feminine, the eatery has a marble-topped bar that lines one wall of the restaurant, and a series of pink tables lines the other. While the surroundings are stylish and the atmosphere casual, the food is bright and refreshing. Admittedly, it was the interiors that drew me in but thankfully, it is the food that will bring me back.

Cafe Roze (pronounced rose, not rosé) serves breakfast, lunch and dinner while staying open from 8 a.m. to midnight Monday through Saturday, and 8 a.m. to 10 p.m. on Sundays. Owner Julia hails from New York, and Nashville was missing an all-day cafe that matched her New York schedule for lunch at 3 p.m. and dinner at 9 p.m. With Cafe Roze, Julia was able to develop a menu based on what she is interested in eating, and she describes the food as clean, fresh and simple.

The delicacy that Julia applied to the design is also applied to each dish, with each creation as eye-pleasing as it is delicious. Instagrammed as many times as the interiors, the country ham toast is a mountain of soft, fluffy, perfectly scrambled eggs atop thinly sliced ham and sourdough that is buried under Parmesan cheese. Although the most popular, this isn’t the only toast on the menu. An avocado hummus toast is topped with pepitas and Aleppo, and a smoked trout toast is topped with radish, lemon and chives. While we can only vouch for the latter, it’s safe to say Cafe Roze knows how to do toast. The country ham toast is a savory treat we suggest splitting, and the smoked trout toast is a salty delight that’s also perfect for sharing.

Something to keep for yourself is the egg bowl, with eggs, cucumber and feta bulgur, kale and preserved lemon yogurt. (During our visit, the bulger was replaced with quinoa to accommodate a gluten allergy.) Again, the eggs were scrambled perfectly. The stand-out flavors in the dish are attributed to the lemon yogurt, which balances and offers brightness in an otherwise savory breakfast. Maybe an unexpected order at 8 a.m., the miso root soup with pickled beets was a personal favorite. Serve me a bowl of this with a side of crispy French fries and call me a happy camper. The aforementioned are served until 4 p.m., at which point diners are given a menu of dinnertime shares, salads and mains. During dinner, we plan to order the baby octopus with crispy potatoes, a charred bean salad with anchovy tarragon vinaigrette and rainbow trout to start.

It is the all-day dining that attracts the majority of customers, but the beverage program draws a crowd of its own. Early risers and neighborhood regulars sip on turmeric steamers, matcha latte and roze lattes, while afternoon and evening visitors explore the menu of cocktails, which riff on classic cocktails and range from an Aperol Spritz to Roze Fashioned to a margarita to a Moscow Mule. “With the cocktails, and with the food, nothing is overly complicated, but the flavors are pronounced,” Julia explains.

It is the simplicity that people love. “At the core of what I wanted Cafe Roze to be was a neighborhood joint. We opened first to the neighborhood and learned the fabric of the city. I was floored by how busy we were from the beginning. Nashville is super supportive, and people root for you. I found that really inspiring and heartwarming,” Julia says of Cafe Roze’s early success. “At the end of the day, the food is not meant to be mind-blowing. It is meant to be really good food. Of course, there is technique in what we do, but the menu is something you can wrap your head around.” The simplistic approach has gained Cafe Roze a loyal set of regulars. “That is the biggest personal success,” Julia says of these regular customers. “The most beautiful thing about watching a restaurant like this grow is seeing that it means something different to everyone. It is a living, breathing thing, and every day you have an ever-evolving cast of characters coming in and out. I know the word community is thrown out a lot, but it has been special and amazing to see the growth of something at Roze.”

Join the cast of regulars to see what all the hype is about! The miso root soup becomes a work of art when the pickled beets are stirred in. Radishes, chives and lemon balance the saltiness of the trout with bright, acidic flavors. 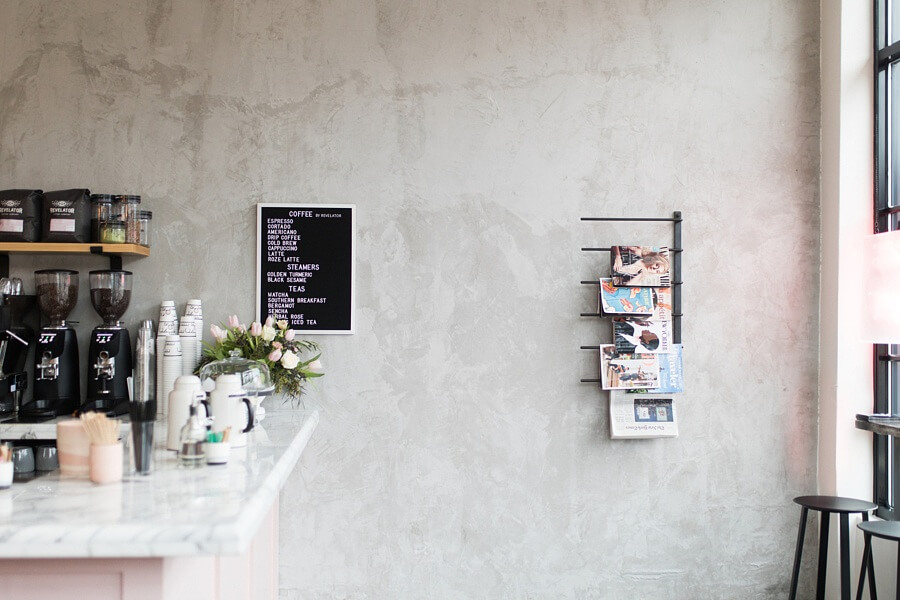 Every corner of Cafe Roze is picture perfect. We weren’t kidding when we said the country ham toast is buried under Parmesan cheese. 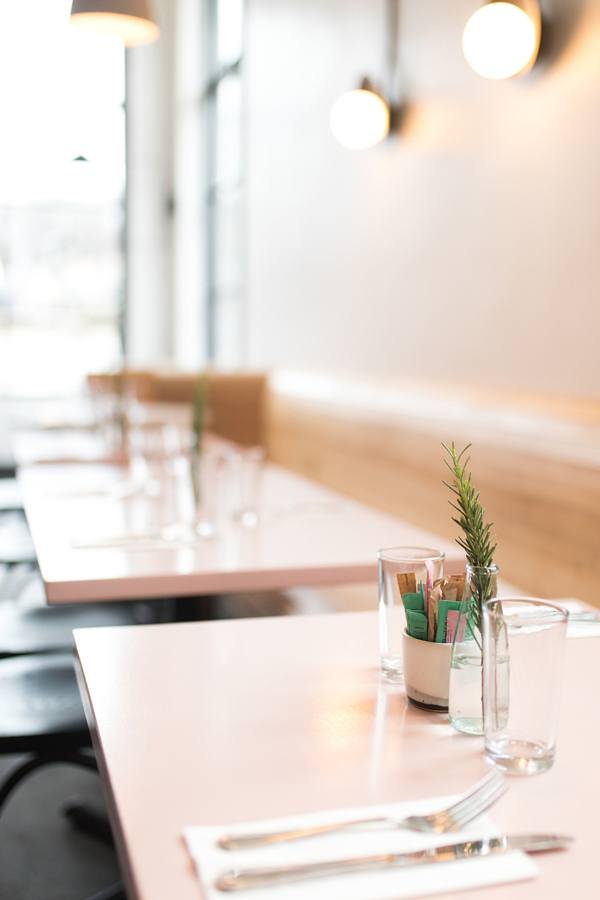 Snag a seat for breakfast, lunch, dinner or drinks! The turmeric steamer is a personal favorite.

Have you tried these eateries yet? If not, we suggest you do, and tell them StyleBlueprint sent you!

Discover more local restaurants we love in the SB Guide and SB App.