Cochon Butcher: Your Next Best Meal

I have a Cajun friend who really loves food, as all good Cajuns do. But he’s not so easily impressed by Nashville’s foodie scene. It’s always an “it’s okay” after I recommend a place. But when he got wind that Cochon Butcher was opening up here, their first restaurant outside of New Orleans, he got excited. He went, and he went back, and now he’s been four times in the six weeks it has been open. Suddenly, we had andouille sausage and boudin in our freezer in his efforts to lure us down there. And that became my first experience with Cochon Butcher’s food … incorporated into my own recipes from their meat counter. And, oh my, was it good.

That brings me to last Saturday when I drove into town after a business trip, picked up my family, and headed to a late Saturday lunch at Cochon Butcher. It was so good that we actually returned the next day, Sunday morning, right when they opened up at 10 a.m. Then, I went back this past Tuesday and left with potato salad, gumbo and Cajun hot dogs to bring home for dinner. Yes, we’re binging on Cochon Butcher, and my family couldn’t be happier.

If you’re keeping track, what I’m trying to say is that  when you go, it’s not a one-time affair. You’ll be hooked. The Cochon Butcher building in Nashville’s Germantown neighborhood has a rich history and most recently housed a metal fabrication business. The interior of Cochon Butcher makes an “L” shape and includes the sandwich and small plates counter (where you place your order), the meat counter for takeouts and the bar at the end. The covered patio at least doubles the seating capacity.

I spoke with Executive Chef Levon Wallace, who was most recently the executive chef at Proof on Main in the 21c Museum Hotel in Louisville, KY. It’s obvious he loves his job, Cochon Butcher and Nashville. He’s warm and not the least bit pretentious, which is exactly how I would describe walking into, and eating at, Cochon Butcher: warm and not the least bit pretentious. It’s authentic and so are the people. I met one of the owners, Stephen Stryjewski, whose laid-back manner belies the awards he and his business partner, Donald Link, have received. Stryjewski won the James Beard Foundation 2011 Best Chef South award, which partner Donald Link also won in 2007. The entire list of awards is impressive and can be found on their website under their profiles: Stephen Stryjewski and Donald Link. General Manager Mindy Theriot just moved to Nashville and carries a thick Cajun accent, which only adds to the authenticity of the establishment. She was lapping up the warm and sunny fall day on the patio while talking business with Stryjewski when I came in. It struck me immediately that this patio is one of the largest and best patios in all of Nashville. And it’s covered, so even rain showers won’t stop you from eating outdoors.

Nashville’s Cochon Butcher is part of the Link Restaurant Group, which includes some of the best and most award-winning restaurants in New Orleans including: Cochon, Herbsaint, Calcasieu, Peche and Butcher. So, yes, you should have high expectations when you go.

What will you find on the menu at Cochon Butcher? Lots of sandwiches, small plates, sides and daily specials. You’ll also find high gravity beers by the bottle and on tap and a small signature cocktail menu. Most everything is made in-house: the sausages, the aiolis, the soups, the drink mixes, the bitters … even the mustard. The potato chips are fried each morning and then packaged in brown bags that have been hand stamped with the Cochon Butcher logo. This place is all about doing things deliberately and doing them right. If knowing where your food comes from matters to you, take some time to learn about The Fatback Collective, through which Cochon Butcher sources their meat and ensures the integrity of their meat products. Yes, all the details have been fretted over so that you are guaranteed to consistently have great meal after great meal. As you try to decide what to order, Manager Logan Kissane tells me that the most popular sandwiches thus far have been the muffuletta, a traditional New Orleans sandwich made with house meats and olive salad on a bun made exclusively for this sandwich, and the Buckboard bacon melt, made with pork shoulder bacon, collard greens, Swiss cheese and banana pepper aioli on white bread. You also must try the Hot Boudin small plate. Cajun boudin differs from the French/Belgian variety, as the sausage is made from a pork rice dressing and stuffed into the pork casing. It is a classic Louisiana sausage that has been next to impossible to find in Nashville, to my knowledge, prior to Cochon Butcher opening. Also, do order the Brussels sprouts, as they are delicious and one of the few vegetable options you will find on this menu. If you are looking for lots of salads and light fare, be warned that this is not your spot.

Try to leave room for desserts, as the magnificence of Lisa Donovan, of Buttermilk Road, is now found here. You may have salivated over Lisa’s pastries previously when she worked at City House, Margot or Husk. Look for cakes, pies, cookies, bacon brittle … it’s hard not to overindulge, but it’s worth it.

Order at the counter, grab your number, find your seat and be prepared for excellent, real food that isn’t complicated and isn’t meant to do anything other than delight and have you coming back for more. And it succeeds. The counter where you order has extra enticements like freshly fried potato chips, cookies and bacon brittle. The Buckboard bacon melt ($11) is one of the most popular sandwiches, made with collard greens, Swiss cheese and banana pepper aioli. Pastrami lovers take note that this sandwich ($11) is delicious and perfectly warm and melty. One of the specials on Sunday morning was grits with sausage. I ordered a fried egg on top and this was a perfect breakfast. The Cajun pork dog ($10) is served “all the way” with chili and kraut and a side of bread-and-butter pickles. 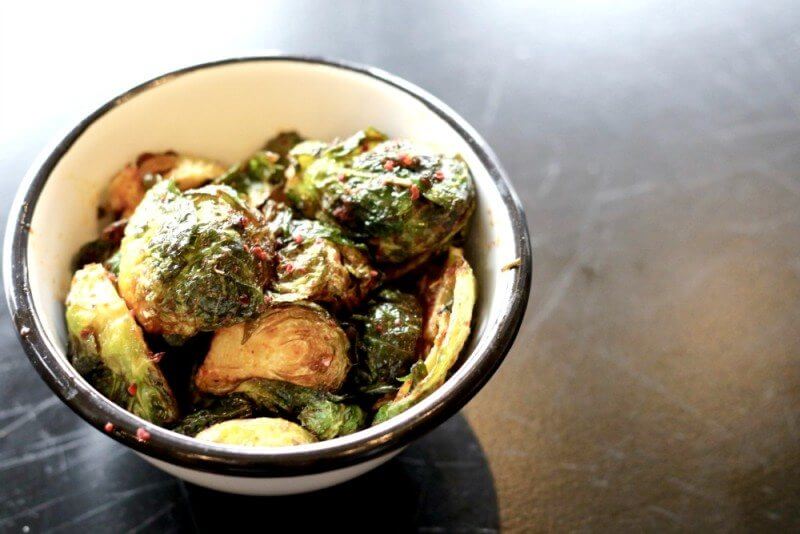 Another must is the Hot Boudin ($6), a sausage made with rice and pork (for those unfamiliar, think of dirty rice in a pork casing). Both the bread-and-butter pickles and mustard are made in-house. Our favorite on the charcuterie plate was the Pork Rillon. Two of the specialty cocktails currently are the Johnny Appleseed ($11), made with Julian Harvest apple cider, chartreuse, Fee Bros Whiskey Barrel, lemon and basil, and the Sazerac ($10) made with Old Overholt Rye, Herbsaint Legendre, Angostura and Peychaud’s. Along with the meat counter filled with smoked and fresh sausages, chickens and more, these take out sides make for a convenient way to take some Louisiana love home with you!

Cochon Butcher is located in a building that includes the just-opened Germantown location of Juice Bar and the soon-to-open Little Donkey, a Mexican restaurant with one other location in Birmingham, AL. Adding to the other Germantown restaurants of Silo, Germantown Café, Rolf & Daughters, Temper Chocolate, 312 Pizza, 5th & Taylor, Red Bicycle and City House, Germantown Pub and Monell’s, this new kid on the block is fitting in quite nicely.

Large private parties? Call and ask, as they will do their best to accommodate.

Take Out & Catering: Yes. They even will hook you up with a whole suckling pig if you would like it! They do not currently handle off-site catering, but pick-up orders, along with their meat counter, are a large part of their business. They will also have a specific Thanksgiving takeout menu including cornbread dressing, boudin-stuffed turkey and cranberry sauce. We can’t wait!

When you go (as you must go), take a photo and tag us on Instagram @styleblueprintnville or #styleblueprint for us to see and possibly regram! I have a Cajun friend who really loves food, as all good Cajuns do. But he's not so easily impressed by Nashville's foodie scene. It's always an "it's okay" after I recommend a place. But when he got wind that Cochon Butcher was opening up here, their first restaurant outside of New Orleans, he got excited. He went, and he went back, and now he's been four times in the six weeks it has been open. Suddenly, we had andouille sausage and boudin in our freezer in his efforts to lure us down there. And that became my first experience with Cochon Butcher's food ... incorporated into my own recipes from their meat counter. And, oh my, was it good. That brings me to last Saturday when I drove into town after a business trip,
Continue Reading