An Amazing Before & After Home Renovation in Cherokee Park

A historic home in Cherokee Park is reinvigorated, thanks to a major renovation and the love of a growing family.

Every home tells a story, whether it’s a new build on its first page or a long-neglected property that has reached its final chapter. In rare cases, just when a home appears to be on its last legs, someone comes along to rewrite the narrative. Such is the case with a historic Cherokee Park home in Nashville that, despite being in a severe state of disrepair, has been reimagined as a growing family’s forever home.

Once dilapidated, with massive water damage and the ceilings caving in, this historic Cherokee Park home is now a stunning — and well-loved — family abode.

When Tufik and Kristen Assad purchased their first Cherokee Park home in 2013, they never dreamed they would eventually make even bigger plans for another property on the same block. The couple fell in love with their charming neighborhood and its proximity to the hospitals where they practice medicine. Still, as their family expanded, they began to outgrow their original purchase. Its tiny lot size didn’t offer much opportunity for expansion, particularly given the area’s historic zoning overlay. The house across the street caught their eye, with its 250-foot-deep lot and classic clapboard bungalow structure. Kristen says she began moving in emotionally the moment they began thinking about a forever home. A few years later, when their neighbor was ready to sell, Tufik and Kristen jumped at the opportunity to buy their dream home. The only caveat? The house was nearly condemnable, with severe roof and water damage, and even a toilet that had fallen through the subfloor and into the basement.

Infusing love into a home’s design can be an art form, particularly when it involves renovating a residence in need of some serious TLC. The homeowners enlisted the help of Van Pond Architect and Owen Builders to help them give their house a new life. Originally a two-bedroom, one-bath, 1,000-square-foot home, the Assads worked with Van to design a roughly 2,800-square-foot addition that included two more bedrooms and three-and-a-half baths. More importantly, they salvaged the existing structure’s historical integrity and worked diligently to enhance the flow without sacrificing the charm. Rather surprisingly, the existing house boasted 10-foot-high ceilings, which is atypical for homes that were built in the 1920s, as this one was. Though the rooms were damaged and deteriorating, the grand scale was impressive and offered the perfect foundation for expansion. After two trips to the zoning commission and one eloquently worded appeal from Tufik, the Assads broke ground on their renovation. That’s when the true work began. “With a conservation overlay from the National Historic Zoning Commission in place on the house, it took a lot of work to hide the mass of this really large addition and not let it overtake the existing house too much,” says Van of the architectural plans. These before and after photos show how Van Pond Architect maintained the classic bungalow style that drew the Assad family to their dream house.

With Van’s keen architectural eye and Kristen’s wonderfully unique design aesthetic (a passion that runs in her family) leading the way, the house began to take shape. “We extrapolated from the existing details to apply and sculpt the new design,” explains Van. “So it talks to the existing house and expands upon the language of it.” And talk, it does. Van’s classic design style, combined with Kristen’s infusion of vibrant colors, gives way to a bright house that functions as a backdrop for the homeowners’ collected art and heirlooms. “I love color,” says Kristen. “I love mixing in a pop of fabric, but as far as actual pattern, I love stuff that’s a little bit asymmetric. I like how that flow is in comparison to a bold color. And obviously, we love art. We’ve been really impressed with the local art scene; half of our original pieces are local artists.” In fact, an original Ed Nash painting graces the front sitting area, and nearly every space in the house boasts an eye-catching piece from the couple’s travel adventures or appreciation of Nashville’s burgeoning art scene. Maintaining the two front rooms’ structure, Van kept the location of the windows and existing firebox. The redesign included new windows to match the old ones and a mantle and new surround for the fireplace. “We had to decide where to put a staircase because there wasn’t one,” offers Van. “There really wasn’t a second floor of the house; there was an attic.” He opted to build the stairwell into the existing house’s footprint, making it feel integrated, as though it were part of the original layout. With animal-print chairs and a Jonathan Adler fixture, not to mention the fabulous Diptyque from local graffiti artist Troy Duff, this dining room is a spunky but elegant space for both entertaining and intimate family meals.

Perhaps one of the most intriguing rooms in the house is a galley kitchen-turned-butler pantry that allows access to both the dining room and the kitchen. The cabinet-lined space is a stunning display of glassware and antique ice bucket collections, mid-century-inspired heirloom crystal inherited from Kristen’s grandmother, and high-end bourbons. Van admits he was initially skeptical of the floating glass shelves Kristen chose for the room but gushes about the beautiful wares they now display. “The things that are out on the shelf are not just there [to be] pretty,” he says. “They’re using those, day in and day out. The space doesn’t just get used once a week to entertain guests; it’s one of the core spaces they use all the time.” 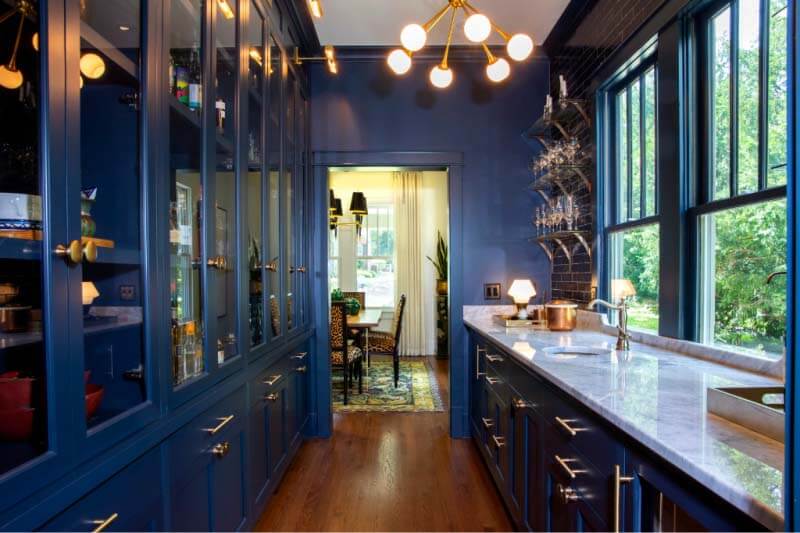 This navy butler’s pantry with gold accents and floating glass shelves is not only a center for entertaining but a favorite spot to relax and whip up craft cocktails. Green is Kristen’s favorite color, as evidenced by her stunning office, which her husband has playfully dubbed “Emerald City.” Her favorite room in the house, she says it’s like a little jewel box. The incredible Malachite Wallpaper, by York, offsets the wonderful hand-me-down wing chair she got from her mom that she reupholstered in fabric by Timorous Beasties. The great room is dark and cozy, a monochromatic masterpiece with a back wall of windows overlooking the screened-in porch and backyard. The coffered ceiling and walls are painted in Sherwin-Williams’ Oak Moss, drawing attention to a piece above the fireplace by local artist Lisa Zager. The beautiful screened-in porch offers a view of the backyard, including the still functioning train tracks that run behind it. A sink from the original residence, which was in good antique condition, was thoughtfully restored by a friend of the family. The homeowners have a passion for cooking, so Van maximized the amount of storage and left ample wall space for artwork. A six-burner stove with a griddle is set into pristine Calacatta Vagli marble, and the slab backsplash makes for practical and easy post-dinner cleanup. This bedroom is a fun exhibit of the Schumacher “forest” wallpaper Tufik and Kristen’s son chose when he was only 2 years old. Great taste! This might be the most inviting 3-year-old’s bedroom we’ve seen, with its rich velvet chair and colorful yet tranquil floral wallpaper. “I knew I wanted a kind of calm bedroom that had a statement piece,“ Kristen says of their master bedroom mural from Anthropologie. Bedside table lamps from Jonathan Adler and another table lamp from GasLamp Antiques add to the room’s flair. Separate his-and-hers closets provide the homeowners with private spaces that reflect their personal styles. Tufik’s closet is designed with his heritage in mind, and it spotlights culturally significant wallpaper from Cole and Son. “My husband is Palestinian,” explains Kristen, “and he wanted to do a cityscape. I saw this and said, ‘This is super cool, honey. This looks like the Homeland.'”

With such high ceilings, the addition of a second floor proved to be a bit challenging. “We created kind of a house behind the house that follows the same basic roofline,” explains Van. “You see that kind of classic bungalow gable shape repeated behind the original one, so you look down the side of the house, and you really don’t get a sense that there’s a second floor stuck back behind it.” Given the homeowners’ limited yard access at their previous residence across the street, the new backyard is a breath of fresh air. Thanks to Van Pond Architect, an incredible team of builders and Kristen’s design ingenuity, the Assad family is in store for a lifetime of love and happy living in Cherokee Park!

RELATED: A Beautiful Tyne Boulevard Home with History (Built as Part of a New Family Compound) The screened-in porch is one of the most impressive features of the home and is as beautiful from the outside as it is from the inside.

Cherokee Park “before” image courtesy of Van Pond Architect. All other images courtesy of Chad Driver of Driver Productions.