Something magical happens each time I reach the 26-mile stretch of highway between Alpine and Marfa. Perhaps it is the gradual softening of the landscape as it turns from rugged tundra to silvery, grass-covered hills, or it might be the boundless charm of the high desert, or perhaps it is the liberating sense of not wanting anything more than what the windshield can frame … There are few places on earth where an arrival can unfold in such charged slow motion across an ever-willing horizon. Sometimes I have had to stop so I could listen to a fleeting rain break away from a mutiny of clouds; I have paused by the side of the road to watch the thinnest of clouds needle through and immovable Cathedral Mountain … Architecture is a means of being in the world, of living in a place and discovering the subtleties of its limits. Architecture is also a means of transcending those limits as space unravels the rituals of light and the pleasures of time … Each construction is a window in time, an opportunity to lessen the fraught velocity our frenzied times; times soon forgotten or rendered barely inaudible against the incomparable beauty of the desert. In addition to the gorgeous surroundings, which provide activities such as hiking or simply taking it all in, Marfa boasts film festivals, music festivals, a public radio station, a theater, a writer-in-residence program, the Chinati Foundation, the Judd Foundation, Ballroom Marfa, Marfa Contemporary, Marfa Studio of Arts and fabulous places to stay like the Thunderbird hotel and El Cosmico.

Do you ever long to go off the grid, to ditch your phone, to pull the plug on all the churning news feeds and live in concert with nature’s wild beauty — to live where the surroundings are a stunning work of art unto themselves? Well, in 1971, minimalist artist Donald Judd did just that, picking up and moving to the dusty West Texas town of Marfa. “The isolation, the long horizon and the everlasting sky were major factors that lured Judd to the high desert, as well as the vacant buildings downtown, which he bought and used for art storage or display, or to work and live in. But his decision at the time was regarded as the solipsistic quest of an artist known for being antisocial,” says Helen Thompson, author of Marfa Modern: Artistic Interiors of the West Texas High Desert. “He imagined and lived a minimal desert lifestyle that catalyzed seekers aspiring to live in a desert setting. He has come to be revered not just as the patron saint of minimalist art, but also as the muse of minimalist interiors, architecture and furniture.”

Since the town has grown to be an enclave for artists, chefs, hoteliers and forward-thinking entrepreneurs, Helen describes the architecture as intensely personal, an oddball mix of funky vibes with ultra-modern art. “In their own ways, each home is a site-specific construction that exists in the spirit of Judd’s command to make art suit its space,” says Helen. “In the best sense, the thoughtful creatives who have settled lately in Marfa carry on the tradition of Marfa as Donald Judd saw it — as a place where the demand to live for art is unavoidable and compelling.”

Helen takes us into three of the homes from her collection of the unique architecture and interiors of Marfa, Texas.

This 100-year-old structure began as a dance hall and through the years served as a grocery and candy store, then fell into disrepair, smaller rooms filled with trash. Barbara Hill, a Houston-based architectural designer saw great potential in the building and set upon making it her sophisticated desert retreat by returning it to its original incarnation as one large, open space. “The red-haired Miss Texas 1956 has always been a contrarian — a minimalist with a vibrant understanding of luxury,” says Helen. “Her house reveals her sense of luxury, because she has created a minimalist desert retreat by removing decorative and architectural elements, rather than adding them. Consequently, the home feels sophisticated and earthy at the same time; a guest feels at peace under the tall vaulted ceiling, and yet sees through the wall of windows a private, prickly Garden of Eden just beyond the front door.” “The outdoor area is an important element of this house — the light in Marfa is lovely, and the weather allows for outdoor living,” says Helen. “People, both tourists and locals, often poke their heads over the courtyard wall here to admire the garden created by Dallas- and Marfa-based landscaper designer Jim Martinez. Owner Barbara Hill doesn’t mind. It’s one of the reasons she loves Marfa.” Homeowner and designer Barbara Hill used birch plywood on the ceiling and the floor for visual continuity. A beautiful standalone bathtub doubles as a striking work of art in the middle of the bedroom with views of the spiky garden beyond. 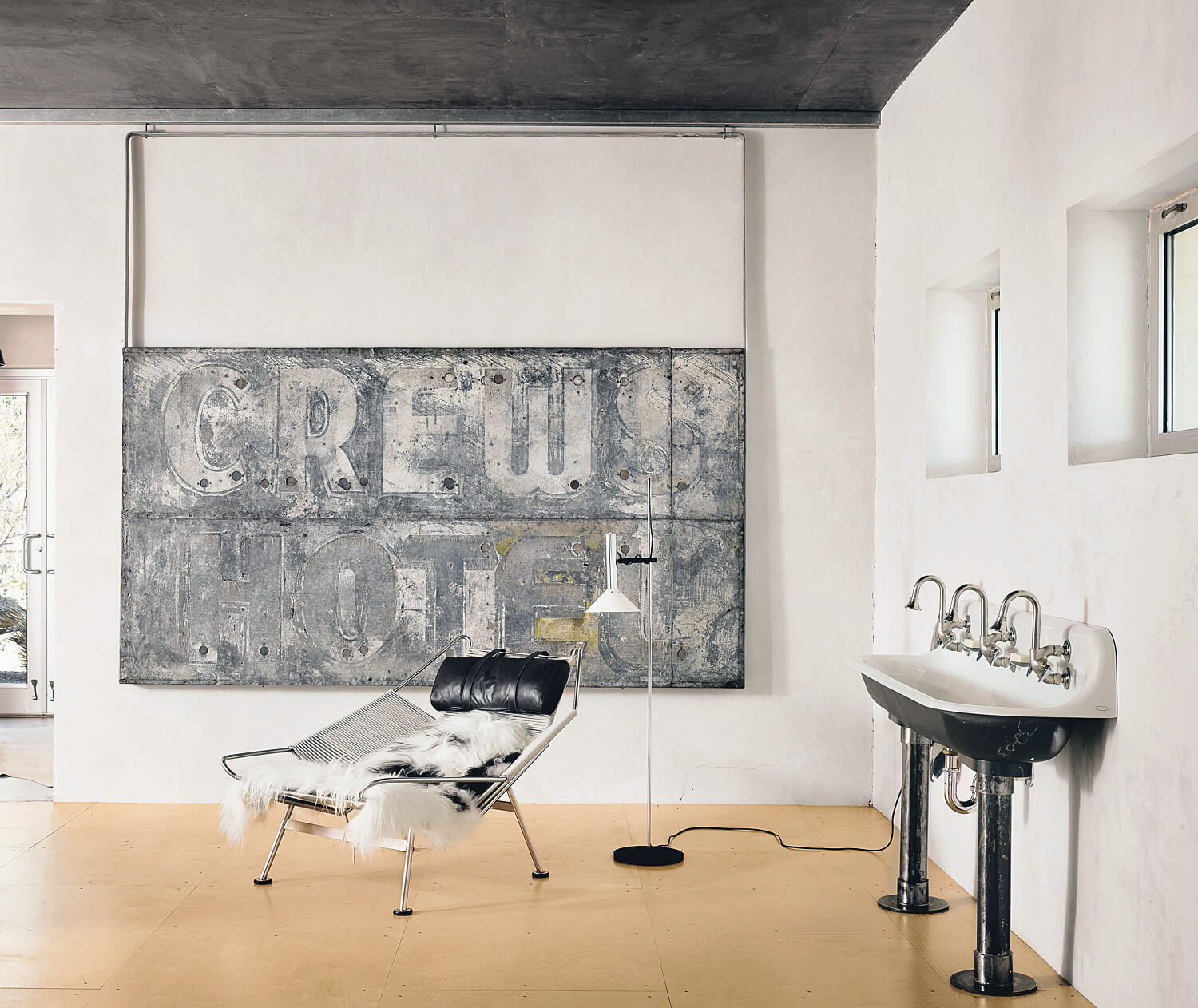 A vintage metal sign, modern furniture and an industrial sink in the bright, sleek space create an entirely modern vignette. The entire kitchen stretches across one wall for a striking visual. The open space is perfect for hosting parties.

Forward-thinking hotelier and Odessa native Liz Lambert grew up in this breathtaking landscape. The hotelier has made her mark as one of Southwest Texas’ most innovative creatives, flipping old buildings into hip joints that revitalize an area, such as Hotel San Jose in Austin’s South Congress neighborhood, and the Thunderbird hotel and El Cosmico in Marfa. This humble yet modern bunkhouse is Liz’s refuge. “This is where Liz comes to get away from it all,” says Helen. “And the ad hoc decorative spirit that pervades the boxy bunkhouse suggests freedom and good humor.” And indeed, when she’s not simply unplugging from the world, Liz hosts many gatherings in her desert oasis. “It’s a house set up for good times, where a screened-in porch just beyond the kitchen shelters a long table where Lambert’s many parties can spill out onto another long table on the patio,” says Helen. “Everything goes away when I am out here,” says homeowner Liz Lambert. “This is a good place to come and think things over.” 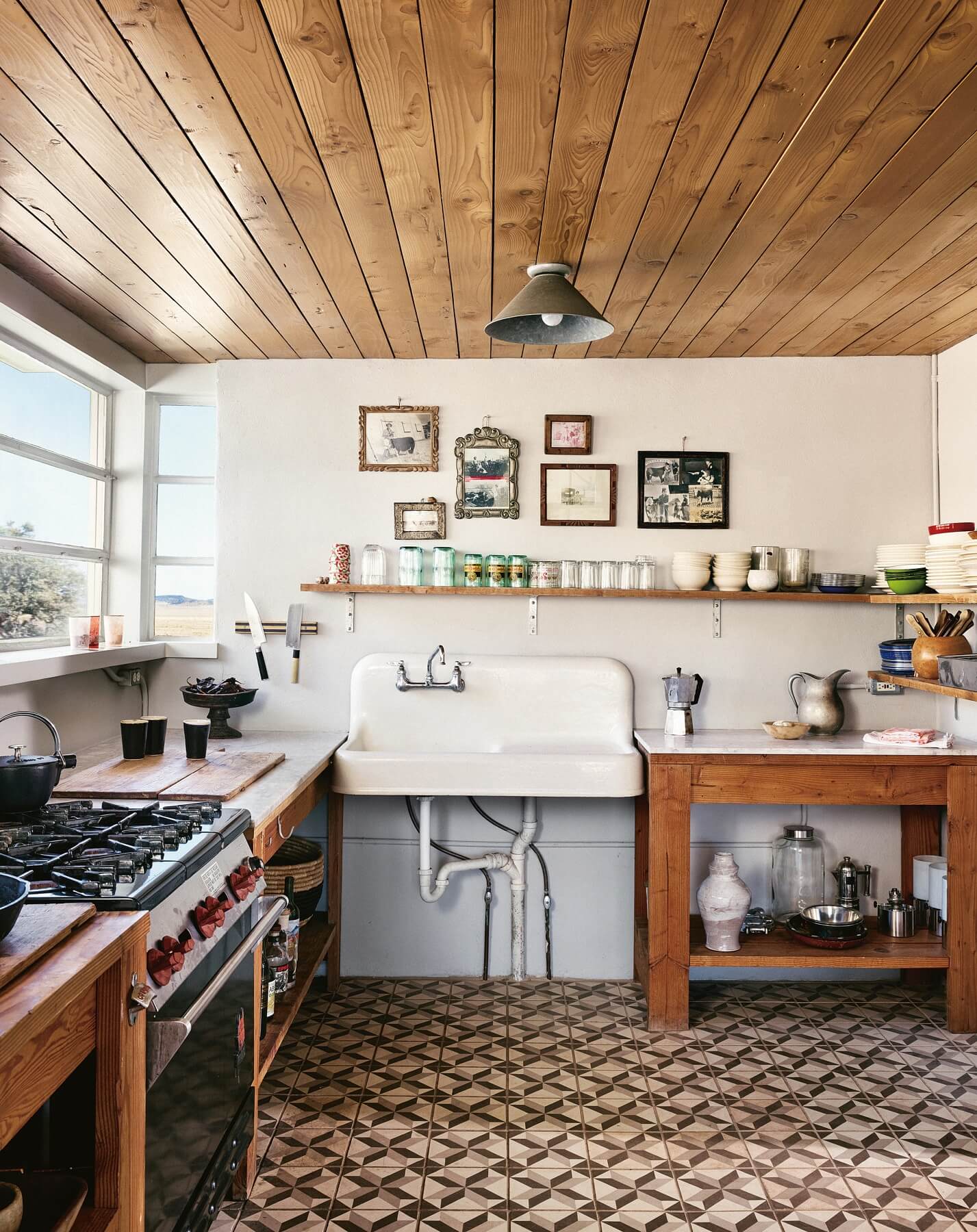 The kitchen features Moroccan-style tiles, and an earthy counter and stovetop offer views of the stunning high desert. Like her ultra-hip hotels, Liz’s Marfa refuge is an eclectic mix of interior accents. “I made it up as I went along,” she says of her off-the-cuff interior design methods. We love the oil drums that support the table shown here. A water tank, a short jaunt from the 1930s-era bunkhouse doubles as the home’s swimming hole. Liz added this minimalist modern outbuilding as a one-of-a-kind bathing room that can be enjoyed alfresco.

Jim Martinez and his partner, Jim Fissel, first came to Marfa in 1998 for an art and architecture symposium at the Chinati Foundation. “They couldn’t stop thinking about the town where environment and art merged so dynamically,” says Helen. So the pair began planning their home. The end result is a highly green home that seamlessly embraces the elements. Helen’s favorite part of the home is the courtyard, where she says a steel staircase adds sculptural drama and where a dining table is set up for parties. “It’s all about the breezes in this house, where a massive tongue-in-groove front ‘door’ that opens from an exterior courtyard into an interior courtyard can be positioned to direct cooling breezes straight inside, wafting over the concrete terraces outside the private wing of the house and the guest wing,” says Helen. “The dramatic courtyard staircase leads to an upstairs terrace for a panoramic view of the world around Marfa. It’s also enjoyed by a family of foxes that Martinez often sees departing around dawn.” “This 2,300-square-foot house seems inscrutable from the street, and a passerby would never guess that the two wings, which open 80 degrees to take in the north view, are as much glass as wall,” says Helen. The 80-degree angle floor plan of the home is a nod to Jim Martinez’s grandmother whose New Mexico home had the same east-facing floor plan. The stairs, made by local welder Bill Parrot, double as a minimalistic work of art. “The chairs at the dining table were made as part of a Works Progress Administration project in the 1930s,” says Helen. “The green hand-built chair belonged to Martinez’s great-grandmother.” The master bedroom is filled with natural light, and a large sliding barn door provides the option for even more breezy openness.

If you’re looking for interior design inspiration that’s slightly outside of the characteristic “Southern aesthetic,” venture out to Marfa, TX, for a visit — you’ll be moved to infuse your interiors with modern touches and elements of nature!

Thank you, Helen, for sharing these three fabulous homes, as well as your insights and knowledge into the history and architecture of Marfa!

And thank you to Casey Dunn, courtesy of the Monacelli Press for the gorgeous images from Helen’s new book, Marfa Modern: Artistic Interiors of the West Texas High Desert.