The Vault has been opened!

Luckily, the newest hot spot in the South Main Historic Arts District isn’t hidden away under lock and key. Located in an old bank building on G.E. Patterson, The Vault is a gem of a restaurant and bar serving up elevated American fare with a New Orleans influence.

“We loved the idea of restoring an old historic building in downtown Memphis and saw a gap in the area for a good neighborhood restaurant and bar,” explains The Vault Operating Partner Michael O’Mell. “The South Main area is one of the most popular areas downtown, and the community feel and eclectic array of restaurants, bars, shops and living spaces just felt like it was the perfect opportunity for us.” Welcome to The Vault! Your ice-cold pint is ready for you at The Vault, where an ice rail runs along the length of the bar to keep your beer cold and frosty. 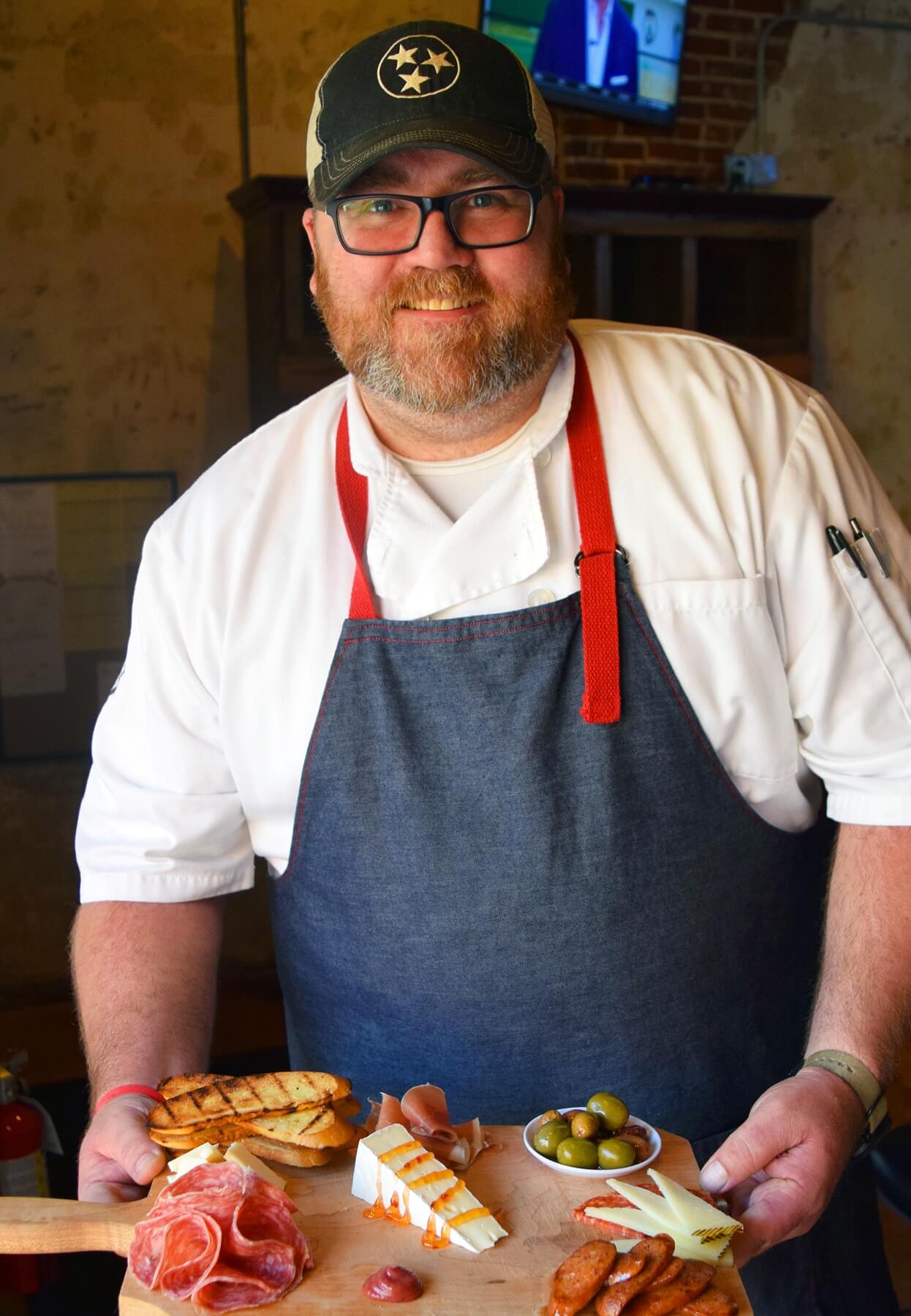 When you pull up to the front of The Vault, you may recognize the building. It was most recently the home of the Double J Smokehouse & Saloon. But beyond the shape of the building, that’s all that will seem familiar. Michael and his team renovated the building from top to bottom. Gone is the smoky, dark bar of old. In its place, you will find an eclectic interior with features like exposed brick that embrace the historic nature of the building, mixed with modern touches that include multiple TVs — one at every booth, as a matter of fact — and an ice rail on the bar to keep your beer frosty-cold.

The Vault is larger than it looks, and there is a spot just perfect for whatever mood you’re in. The restaurant has a large downstairs dining room and bar — both offering the perfect view of the stage for when live music is on tap. Upstairs is another bar and dining area plus a lounge with cozy couch seating. Off the upstairs dining room is a great little patio if you want to dine al fresco on one of Memphis’ pretty summer nights. The upstairs bar at The Vault The Vault has a great outdoor patio just off the upstairs bar. No matter what you are thirsty for, The Vault has a fully stocked bar, several beers on tap and a large wine selection. Upstairs seating includes a TV at each and every booth. Image: The Vault

“We brought in a chef of the caliber of Aaron Winters because we wanted to be known for offering great food,” adds Michael. You might recognize Aaron’s name or the friendly smile behind his bearded face. This chef helped Andy Ticer and Michael Hudman open Porcellino’s after working for them at Hog & Hominy. “I owe a lot to Andy and Mike,” says Aaron. “Without my experiences with them and the time I spent in Italy interning with chefs and butchers, I wouldn’t be the chef I am today.”

A former retail businessman with a love for all things culinary, Aaron first stepped into a chef’s jacket as an intern for those two aforementioned uber-talented chefs at their eponymous Andrew Michael Italian Kitchen. After several months of interning and spending his vacations apprenticing for chefs around the country, Aaron put on his chef’s whites full-time. “Working for others is the best way to learn,” explains Aaron of his not-so-traditional culinary education.

For The Vault, Aaron created an extensive menu that Operating Partner Michael describes as American with a Cajun influence. “We wanted the menu to be open to anyone. We really pushed to make this place a spot you can visit two to four times a week, as opposed to pricing ourselves where you can only come once a week,” explains Michael. “You can get a steak on a date night or stop in for a burger while you watch a game.” The menu at The Vault “My favorite city in the world is New Orleans,” adds Aaron. “I worked to create a menu of Southern food with a Creole spin to many of the dishes.” Shrimp beignets with remoulade sauce, po’ boys and jambalaya topped with crawfish étoufée are a few of the classic New Orleans offerings on the menu.

Oysters are featured prominently on the starter menu. Choose from oysters on the half shell, char-grilled oysters, oysters Rockefeller or deviled oysters — baked oysters topped with deviled crab meat. “We ship in fresh oysters from the Gulf and Virginia. I like to use the smaller, plumper Rappahannock oysters in our baked oyster dishes,” says Aaron. If you love oysters as much as we do, stop by during Happy Hour — Monday through Friday, 3 p.m. to 7 p.m. — to get a dozen oysters and a bottle of wine for a mere $20.

The extensive menu offers much more than New Orleans fare. “The menu shows my signature way of cooking. Soulful food that is not expensive,” explains Aaron. The spicy crab claws starter is a perfect example of a Southern dish with the chef’s unique spin. Crab claws are tossed in a wonderfully complex sauce of butter, garlic and chili sauce. “This is one of my favorite dishes on the menu,” says Aaron. Oysters Rockefeller is one of the four oyster options on the menu. Spicy crab claws are one of Chef Aaron Winter’s favorite appetizers on the menu. 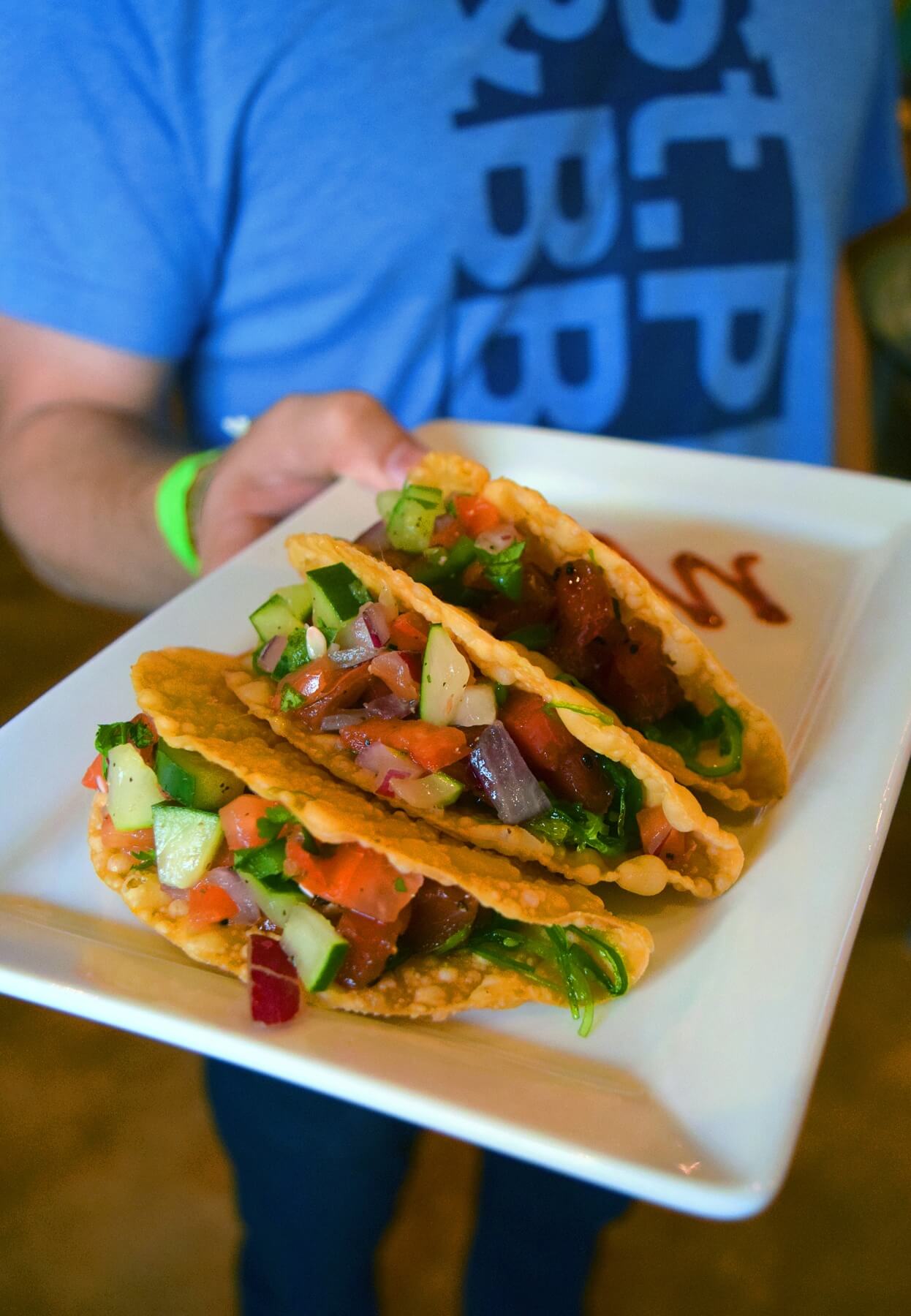 Poke tuna tacos are an excellent way to start your meal.

Aaron also recommends starting with the poke tuna tacos. The crispy and light taco shells are made in-house from won ton wrappers. Aaron stuffs them with fresh sushi-grade tuna, cucumber, seaweed salad, pico and a spicy mayo. Each bite is spicy yet refreshing at the same time. And the butcher board is rooted in authentic Italian culinary tradition. Aaron spent months in Italy learning about butchering and charcuterie. “We make our raw sausages in-house, and I will be making terrines and pates as well.”

“My menu will change often, based on what’s available locally,” adds Aaron. “I buy local when I can, using ingredients from places like Wilson Farms, Claybrook Farms and Home Place Pastures. I also head up the street to the Memphis Farmers Market every Saturday.”

The Vault’s flatbreads are perfect for sharing. “The Yardbird is my favorite,” says Aaron. Blackened grilled chicken is scattered across a flatbread pizza loaded with a goat cheese cream base, roasted red peppers and a spicy chili barbecue sauce. Michael chimes in as the two discuss their menu favorites, saying, “I love the crawfish mac and cheese. It ties in that simplistic meal of mac and cheese, but Chef puts a twist on it with the crawfish and the seasonings that make it delicious.”

The steak and pommes frites is another entrée worth noting. “This dish is an example of where I use technique to create superb food,” explains Aaron. A ribeye is first cooked sous vide and then grilled to order. This tender and juicy cut of beef is then topped with a compound butter and served with crispy fries. And at just $24, it may be one of the most affordable — and tender — steaks in town. The Vault’s steak with pommes frites is a classic! The limoncello crème brulèe has the perfect amount of lemony tartness thanks to the addition of Chef Aaron Winter’s homemade limoncello liqueur.

Be sure to save room for dessert! The chocolate chip beignets with chocolate ganache and vanilla gelato, as well as the limoncello crème brulèe, are worth every calorie! And after dinner, stick around to watch your favorite sports team on one of the many TVs, or listen to live music if a band is on stage. This is your neighborhood hangout, ya know!