“I’ve always challenged my guests to try new things when it comes to seafood,” says Ben Smith, chef and owner of the longtime Midtown favorite Tsunami, which opened 19 years ago. And customers have been taking him up on his epicurean enthusiasm and savoring every bite ever since.

For Ben, his menu all starts with a passion for seafood. “I have a standing order with all my purveyors to send me the most unique specimens of seafood they can get their hands on. I get in things that most Memphians have never heard of: Kajiki, Nairagi, Opakapaka, Ono, Opah and Uku, to name a few.” Since July 14, 1998, when Ben opened Tsunami, it has become a cornerstone of the vibrant and hoppin’ Cooper-Young entertainment district. When the weather is nice, dine al fresco on Tsunami’s sidewalk patio. Ben Smith is the chef and owner of Tsunami. Image: Justin Fox Burks Baja Hiramasa from Baja California Sur, Mexico, is one of the many unique fish varieties Chef Ben Smith serves at Tsunami. This yellowtail has a buttery texture and bright, mild flavor. “I really want Memphis to grow beyond blues, barbecue and Elvis,” he explains. “I cook what I want to cook and eat. I am not going to compromise or dumb down my offerings for the barbecue belt.” This determination, commitment and persistence has earned Tsunami its reputation as the best seafood restaurant in town — an eatery where you’re comfortable trying something new and confident that it will be delicious.

Ben has been adventurous in the kitchen — and in life — since the beginning. Born and raised in Memphis, this talented chef set his palate on a global voyage. In 1984, he headed to Hyde Park, New York, to attend The Culinary Institute of America. In 1986, after graduation, he traveled around the world, dining and cooking in kitchens in as far-flung places as Hawaii, New Zealand, Australia, New Caledonia and Tahiti.

Luckily for Memphis, Ben eventually decided to come back home and brought his passion for good food and seafood with him. At a time when the only seafood restaurants in town were places like Long John Silver’s and Catfish Cabin, Ben wanted his seafood-forward restaurant to incorporate the global flavors he learned about during his years cooking and traveling in Hawaii, the South Pacific and Australia. Chef Ben Smith most often orders whole fish — like this halibut — that he then butchers to order himself. Image: Erin Deming This dish is almost too pretty to eat! Image: Michelle Kelly/SB Guide

His business partner was an unlikely match. Thomas Boggs, of Huey’s fame, offered to help Ben make his dream of a restaurant a reality. A burger joint and a seafood restaurant may not have the same focus, but they both require the same attention to detail and well-organized back-of-the-house systems, of which Thomas is a master. Ben and this business-savvy restaurateur make an unexpected but very successful partnership. “I still use the same inventory systems and bookkeeper that Thomas set up for me way back when,” says Ben.

Along the way, Ben and Thomas disagreed on a few key points.

First, this loyal Midtowner knew that he wanted to open his restaurant in Midtown. “Thomas wanted me to go out East, but I knew that I wanted to stay in Midtown. I told him that people know me here and will understand and support this concept,” Ben explains.

For years, Ben would come hang out at the bar at In Limbo after work. “Harold Cooke was the bartender, and he would make me a drink, and then Chef John Pearson would send out something good to eat. One night I made a list of all the things I would want in a restaurant – exposed brick, large windows, free-standing building, concrete floors. A few days later, I was sitting at the bar at In Limbo and realized this spot had all of that,” says Ben, not knowing that the owner of In Limbo would decide to sell her restaurant right when his new eatery needed a home. “At that time, I never imagined that I’d one day have the opportunity to take over this exact spot.” This dining room on the right side of the restaurant will soon be transformed into a lounge; renovations start this summer. Start with the Asian nachos! Seared sushi-grade tuna is served on wonton chips and garnished with sliced jalapeños, Sriracha, lime crema and fresh cilantro. It’s a fiesta in every bite! While most of the menu is seafood, Tsunami does offer a few non-fish items like these tasty cold sesame noodles from the appetizer menu.

Once they had a location, then it was time for the name. Thomas had suggested Ben’s Café or Cooper Street Café. Wanting something more original, Ben turned to Billy Riley, then-owner of the design firm, Combustion.

“The first design he showed me, I knew it was the one,” recalls Ben. “I loved it. It hit all the right spots. Tsunamis are associated with the ocean and seafood. It’s exotic. It’s a Japanese word that ties into my Pacific Rim and Asian influences. Plus, every week, when I lived in Hawaii, a tsunami alarm would sound, just like the tornado alarms we have here in Memphis.”

Thomas, however, was not a fan. “He thought no one would have a clue how to pronounce it or know what it was.”

One day during construction, Ben and Thomas were going back and forth over the name. “We were both holding one side of a ladder for the guy who was working on our HVAC system. Thomas was again saying no one would know what it was. Then this construction worker leans down and says, ‘You are talking about that big wave, right?’ Right then and there, I knew I had won the battle over the name!” Tsunami is one of the few places in Cooper-Young that has its own parking lot. There is no other place in town like Tsunami. Image: Michelle Kelly/SB Guide The bar at Tsunami is the perfect place to grab a quick bite. Image: Michelle Kelly/SB Guide Years after opening, Ben continues to push the boundaries and try new things. For instance, Tsunami was the first restaurant to receive Project Greenfork certification. When Project Greenfork founder Margot McNeeley came to talk to Ben about her new project, he had no hesitation. “We were already doing a lot of the things on her list. We were already recycling glass. Once a week I would have an employee fill my pickup truck with the bottles we had accumulated and take them down to the First Congo Church recycling bins. We were also doing some composting. My wife Colleen had gotten a large compost bin for her birthday and was trying to make sure we didn’t throw away anything that could be re-purposed, because she understood the impact these simple steps could make.”

After leading the charge as the first Project Greenfork-certified restaurant and proving it could be done, Ben helped launch a local nonprofit that has now led more than 70 restaurants to operate on a model of sustainability and environmental awareness.

Ben also helped start what has become a popular trend on menus across Memphis. “We were one of the first places in town to offer a small plates menu,” Ben explains. “I had seen this new menu concept in other larger cities and thought it would be a more practical way to get folks to try new fish.” Many of the fish varieties Ben was having flown in were expensive. “I thought, What if we offered smaller portions that cost less?” And, it has worked! The small plates menu changes daily based on what new fish Ben has received. On any given day, you can expect to find at least four small-plate fish options.

Ben introduced Memphis to sea bass and Thai rice through the dish that has become Tsunami’s signature menu item. “Our sea bass dish encompasses my philosophy of simplicity in flavor and presentation.” A perfectly roasted and tender slice of sea bass is served on top of a mound of chewy, nutty black Thai rice and surrounded by a pool of soy beurre blanc. Only three key ingredients, yet this dish is sublime. 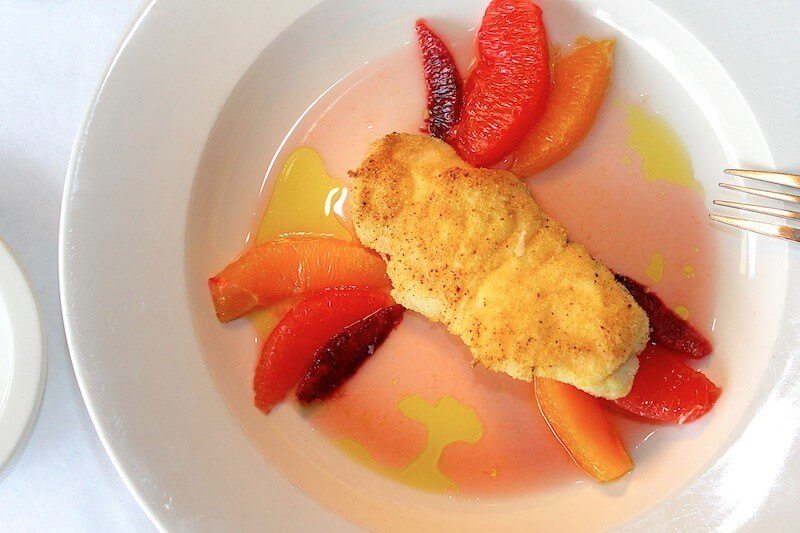 Save room for the ginger donuts! A play on the beignet, these fried donuts are served warm with refreshing coconut sorbet on the side. With the soft interior, crispy exterior, pungency of the ginger and the creamy sorbet, there is a pleasing mix of different textures and temperatures in every delicious bite! Image: Michelle Kelly/SB Guide

A delicious dish that he thinks more customers should try? The spice-crusted tuna on cucumber salad with wasabi vinaigrette. “This has always been my favorite. I thought it would be our signature dish,” says Ben. “I love the simplicity of it. We tie together a few classic flavors — tuna, cucumber and wasabi were made for each other!”

Over this past winter, Ben purchased the building that has been Tsunami’s home, and he has some exciting developments in the works. “Over the summer, we will be transforming the dining room on the right side of the building,” says Ben. “By fall, this space will be a fun lounge with great cocktails and a menu with an Asian street-food theme.”

The new lounge menu will feature items like satays, banh mi sandwiches, poke bowls and even Spam musubi. (Yep! You read that one right. It’s a popular Hawaiian sushi-like snack.) As Ben takes Tsunami into its 20th year, it seems only natural that he’d mark the milestone year by introducing us to more new and exciting flavors.