We tend to think of gray hair as being something that hits women in their 40s or 50s; those first telltale signs of aging that seemingly come from nowhere, popping up in wiry threads all over our heads.

For some women, those grays come in much earlier, and we spend the next few decades waging a color war against those silvery interlopers in our otherwise brunette (or blond, red or black) locks. And others, no matter their age, simply embrace the gray when it appears. Stephanie Jones started noticing stray grays at age 19, and she decided to go full gray at 37, after the birth of her twins. Image: Lisa Buser

Stephanie Jones was just 19 when the little stray grays started showing up. An avid swimmer, she realized with all the time she spent in the pool, it didn’t make sense to invest in hair color, and those strays didn’t bother her much. It was after the tastemaker and owner of me & mrs jones, a DIY boutique and studio with two locations in Memphis, TN, had twins at age 37 that she started to feel her hair looked tired. “I considered color and talked it over with my current hair gal,” says Stephanie. “We decided to just go with it, but we made a pact — seriously! — that she would not let my gray start to look yellow or dingy.”

Flower magazine editor Margot Shaw of Birmingham, AL, was 16 when she began playing with hair color, “when the blond became mousy brown,” she says. “This slavery to the cap/foil continued, except for a brief reprieve during pregnancy, until, at last, one day I spotted some lightness growing in around my face, and thought, ‘Hallelujah, I’m going to let this happen!’” Forty-four-year old Beth Miller has been coloring her hair since 19 to cover the gray. “I mostly did it myself until I was about 35, and then I had a regular stylist when I lived in Atlanta,” says Beth, who now lives in Louisville, KY. “I was every color from dark brown to light brown to brown to red to super light brown.” Beth made the decision to embrace her gray in 2013, the same time she decided it was time to cut her shoulder-length hair. Beth, a commercial airline pilot, was always in the air for work, as well as traveling to France to pursue her doctorate. “In November 2013, I decided to get rid of all the hair drama, get a short cut, and let the gray start to grow out,” says Beth.

“Part of our job as hairdressers and colorists is to give our clients glorious color and hairstyles, but also to help our clients when they are ready to stop coloring,” says Ellen Hornyak, Stephanie’s stylist and colorist at Juve Salon Spa in Memphis.

And going gray isn’t as easy as shunning hair color, according to our experts. Everything from the texture to the cut to products is part of the journey from covering the gray to embracing it.

“We always start by telling them this is a journey we will take together,” says Ellen. “It will take several salon visits, but the transition time has been made a lot easier with a variety of products.”

“I insist the process should be gradual, as not to shock everyone,” says Marian Sang of Omagi Salon Spa in Louisville. “There are ways to keep it seamless, depending upon the shade of the color we are growing out.”

Jill Higgenbotham of J Michael’s Salon and Spa in Louisville agrees.” It’s a marathon, not a sprint,” says Jill, who is Beth’s hairdresser. “For Beth, we stopped the all-over color retouch and began blending with highlights and a few lowlights and cutting her hair into a bob.”

As Jill worked with Beth’s hair through the transition, the lowlights were phased out, and then the highlights were toned to a cooler color to better blend with the mix of gray coming in. “At this point, we cut her bob an inch shorter at least,” says Beth. “Slowly, we put in fewer highlights and kept gradually cutting.” 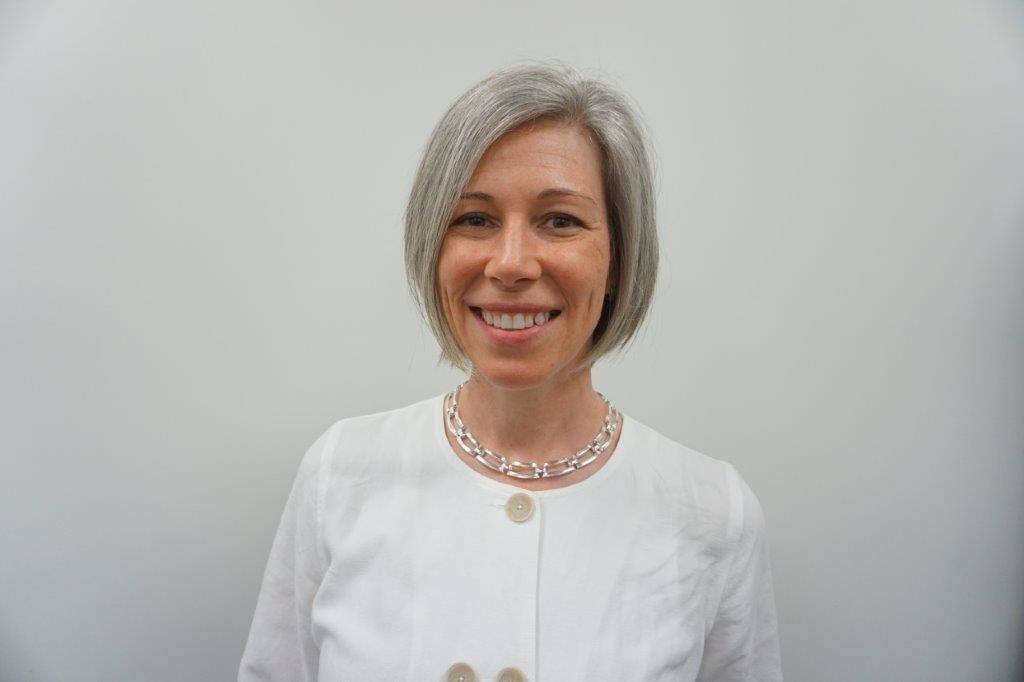 Beth went all-in on gray in 2013. “I decided to get rid of all the hair drama, get a short cut and let the gray start to grow out,” she says.

Get Ready for Change

As gray hair grows in, the hair’s texture changes, too. “It has less shine and usually is a different texture,” says Paige Simmons of Paige Simmons Salon in Nashville, TN. “Not always worse, just different.”

It’s important to pay attention to how the new hair is growing in, too. “It grows in in a different pattern, which could create flips and cowlicks,” says Paige, who notes she not only has to adjust how she cuts a client’s hair, but even where they part their hair.

One definite upside to transitioning to gray is that the cost of coloring your hair begins to drop, as you move from full color to lowlights and highlights, to highlights only and then just a gloss. But because the texture changes, too, our experts say it’s more important than ever to use the right products to manage texture, add shine and protect gray hair from the elements.

“Since you’re not getting the color, treat yourself to an in-salon conditioning treatment,” says Jill. “The addition of heat amplifies the benefits of treatment, and the scalp massage is relaxing.” For daily shine, she recommends Eufora Illuminate Shine Mist, which also protects hair from sun damage and acts as a heat protectant.

“Hair color can soften wiry gray hair,” says Marian. “But clear glosses can add shine, moisture and manageability during and after the growing-out process.”

“For a polished look requiring less maintenance, consider highlighting periodically after completing the transition to keep gray white and bright,” says Ryan Taylor, stylist and Aveda colorist at Salon U in Birmingham, AL. Both Ryan and Marian recommend Aveda Blue Malva shampoo and conditioner to their clients with gray hair, which Ryan says will brighten gray and neutralize brassy tones.

“I recommend a shampoo that clarifies the hair and the scalp, like Eufora Urgent Repair shampoo,” says Jill, who advises discussing the use of clarifying shampoo with your stylist. “Keeping the follicle free of buildup and environmental pollutants will allow your natural unpigmented hair to grow in and shine with its truest color.” Beth Miller embraced her gray, cutting her shoulder-length hair into a chic bob.

None of our three gray goddesses has a single regret about going gray.

“I have truly never regretted going silver,” says Stephanie. “The time and money I’ve saved at the salon far outweigh any tiny negatives there might be … I really like my hair the way it is. Life is too short!”

“Breaking up can be hard to do, but it is so worth it,” says Margot. “I have loved every minute of being gray and think most women would be surprised to see how beautiful they look as the lighter gray tones frame their faces.”

Beth reports she’s had more compliments about her hair color since she made the transition 18 months ago than she’s had her entire life. “Just tell yourself you’re going to love it — this is how God made you!”

Stay beautiful! Download the free SB App and connect to the best of everything in the South!