Holly Whitfield of I Love Memphis: FACES of Memphis

Andria is an advertising professional, freelance writer, concert presenter and mother who has happily called Memphis home for two decades.

As the editor and head writer behind the I Love Memphis blog and its social media presence, Holly Whitfield shares and shapes the changing landscape of the city and its perception at home and beyond. The blog, which has been helping to do its part for Memphis tourism since its inception in 2009, celebrated its 10th birthday in August of this year and thanked its readers with a celebration at Railgarten. We recently sat down with Holly to get her reflections on the site, the city and how her own connection with Memphis has grown. Meet this week’s FACE of Memphis, Holly Whitfield! Meet this week’s FACE of Memphis, Holly Whitfield, the editor and head writer behind the I Love Memphis blog. Image: Louis Tucker

I was born in Hattiesburg, Mississippi, and grew up in the suburbs there with my family. When I was 18, I felt like I needed to go somewhere different, so I went to the University of Memphis, and that’s how I got here.

What made you choose Memphis?

I wanted to be an architect, and the University of Memphis had a great undergraduate architecture program — like, really great. All their graduates were going to MIT and Harvard and all the best schools.

I did that for a year and a half, but then I was like … you know, I was always going to be a writer. There was just no way I could get around it. So I studied writing and then also got a degree in graphic design as well. So that is why I came to Memphis.

RELATED: Your Guide to the Pinch District, Memphis’ First Neighborhood

Have you been here ever since?

What makes Memphis unlike anywhere else?

We have a lot of unique history. So many things got their start here or were inspired by the city. I think that makes us unique. If you go down by the Metal Museum, just in that little area is where European explorers first saw the Mississippi River. But you’ve also got the Chickasaw mounds, and all of that happened right here in Memphis, in that tiny spot. There are hundreds of stories just, like, in that one place. There are so many great stories that are important to culture in general.

What’s been one of the most surprising things you’ve learned since having more of an inside look at the city?

I was originally overwhelmed by how much people cared about things that make Memphis special. When we had the Tennessee Brewery, Untappd, I just could not even comprehend how excited people were about that. There were so many stories about it, and so much history, and I guess people just always had a curiosity about what was going on in there. It’s a good thing. We really could have torn down the Chisca. We really could have torn down the Sears Crosstown building. But instead, these places are really special and unique. There’s nowhere else like those buildings.

Holly expresses her joy and love for Memphis, in front of a mural by Birdcap. Image: Louis Tucker.

You went from the traditional newspaper publication world to a digital outlet. How does that change how you approach your job?

When I worked at The Commercial Appeal, I worked in the niche publications department, so I did all the magazines. And there were either bi-monthly or monthly deadlines, so I’d have a week where it was just insane trying to get something in print. And once it’s in print, it’s gone.

Changing to digital, it’s much more steady. It’s rolling over every day. Everything is living and breathing, and I’m updating and editing content constantly. Obviously, we have some bigger projects, but it’s cool to be able to work just by the minute.

You’re also managing the social media reaction to the site and Memphis news in general. What’s it like to have that constant engagement?

I think it comes kind of naturally for me. When I was in ninth grade, I made this newsletter that I passed out to my friends. It was just me giving commentary on what was going on — like, “Oh yeah, that pop quiz was bogus; I can’t believe this teacher did this. Did you hear the morning announcement?” I think I’ve always been interested in seeing what everybody is saying, what everybody is thinking. I think I have that natural curiosity to be part of the conversation or at least to watch the conversation.

“I think I have that natural curiosity to be part of the conversation or at least to watch the conversation,” Holly says of the impetus behind her job at ILoveMemphis.com. Image: Louis Tucker.

How have you seen the look and feel of the city change since taking over the blog? What has ILoveMemphisBlog.com’s role been in it?

Well, there are a lot fewer empty buildings. There’s so much more activity, especially downtown. There are just more things to do, more people out.

When the blog started 10 years ago by my predecessor, Kerry Crawford, any new thing that opened was always going to make it on the blog. Now there are so many things opening, so much new stuff, I can’t cover everything. It’s a good problem to have.

I actually was talking to someone last night and she said, “I moved here a year and a half ago and your blog just changed my life because it helped me find my place in the city.” I’ve had so many people tell me similar stories, and that’s so incredible. And that’s not about me. It’s about all of the work that everyone has put into the blog. When I took over in 2013, it used to be revolutionary to say, “I love Memphis,” and now it’s the cool thing to do.

Now I think we’re in a new era where we can love Memphis and we can also say, “Hey, I love you, but you need to work on this.” Third-wave Memphis pride is happening now. ILoveMemphis.com celebrated its 10th birthday in August of this year and thanked its readers with a celebration at Railgarten. Pictured, left to right, are Caitlin McGee, Holly Whitfield and Kevin Kane. Image: Forever Ready Productions.

Obviously, you can’t pick favorites among the many local attractions, but what is the first place you think visitors should go when they arrive in Memphis?

They should go to The National Civil Rights Museum, for sure. It does such an incredible job of telling the whole story about civil rights from a worldwide perspective. You can go to one place and you’ll learn the story of Memphis as well as how Memphis is this epicenter for so many things.

Pancho’s cheese dip: Yellow or White?
Ooh, I like the white one.

Jukebox or DJ?
I can’t pick. I really like the jukebox at Alex’s because it’s like going back in time. But we have some fun DJs, too.

Apologize less and express gratitude more. We’re all just trying our best, right? Cutting each other a little slack and being appreciative makes it a lot easier.

What are three everyday things that you can’t live without?

Probably sunscreen, unsweetened iced tea, and then my little notebooks. I always have some kind of notebook or journal and I’m taking notes by hand.

Thank you for discussing all things Memphis with us, Holly! The Nashville Artist You’ll Fall in Love With

Valentina Harper's art studio is located on the second floor of the beloved and eclectic Arcade in downtown Nashville. She opens her doors on First Saturday Art Crawls for guests to come and see the detailed, colorful works of art she creates. What they often find, though, is an immediate draw to her warm and welcoming spirit. Born and raised in Venezuela, and now a six-year Nashville resident, Valentina is a ball of energy and a gifted artist. She uses a Rapidograph pen to freehand the tiny little designs and lines and details, and (sometimes) fills them in with bright colors. Now, you can find her designs in 12 different coloring books and on coffee mugs, pillows, leggings and so much more. Meet this fabulous, talented and fu
Continue Reading 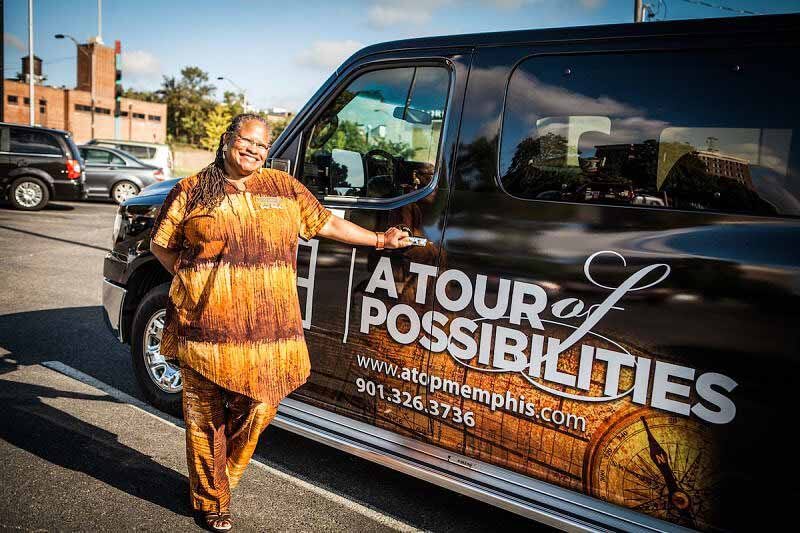 The Dreamiest Farm Wedding EVER