“In like a lion and out like a lamb” …  I love you, March! Especially the lamb part. Spring reading calls for the fierce and the gentle — also the funny and wise — and today’s post features eight current books for your reading pleasure right now. My top pick for a lighthearted Spring Break read is Be Frank With Me, the debut novel by Julia Claiborne Johnson that’s just out and already finding enthusiastic fans everywhere.  Here’s the set-up:  Mimi Banning is a single mother whose first book won the Pulitzer Prize and the National Book Award and topped the bestseller charts.  Paralyzed by success and attention she doesn’t want, Mimi retreats into near-total seclusion in the hills of LA and hasn’t written a thing since.  When she loses all of her savings in a Ponzi scheme, though, she is forced to write that elusive second novel.  Her kind-hearted publisher sends her an assistant, Alice Whitley, who expects to help with the book but instead gets handed the daily care of Mimi’s 9-year-old son, Frank.  He seems to be “on the spectrum”:  brilliant; a sharp dresser; obsessed with old movies; not really able to get along with the other fourth graders.  He’s also very funny!  Frank’s story shows that it’s possible to make peace with the world without giving up your essential self, the sometimes even slightly crazy things that make you you.  Hold onto these parts of yourself, the book gently reminds us – and hold onto those you love.  One of my friends told me it was the best book she’d read since All The Light We Cannot See. “It’s very dear,” she said.  Yes. Be Frank With Me by Julia Claiborne Johnson

The Swans of Fifth Avenue

My top pick this spring for chick lit with substance and style is The Swans of Fifth Avenue, by Melanie Benjamin. I thought I’d enjoy this book but didn’t expect to be so captivated! Benjamin bases her novel on historical fact — the friendship of Truman Capote and his “swans,” a group of glittering New York City socialites during the 1950s. He is their brightest, shiniest bauble, a literary celebrity who is witty and warm, gossipy and amusing, and they welcome him into their innermost circle. He becomes especially close to Babe Paley, the most elegant Swan of all; he and Babe come to see each other as soul mates, each of them harboring loneliness and sorrow that only the other recognizes. In 1975, he makes a gross miscalculation and publishes a piece of “fiction” in Esquire that reveals many of the Swans’ secrets. The devastation that follows for both Capote and the Swans is the stuff of legend. It is now also the subject of this riveting novel that captures the elegance of a bygone era and its many concealments. It captures the deepest of friendships and the deepest of betrayals. It captured me entirely. 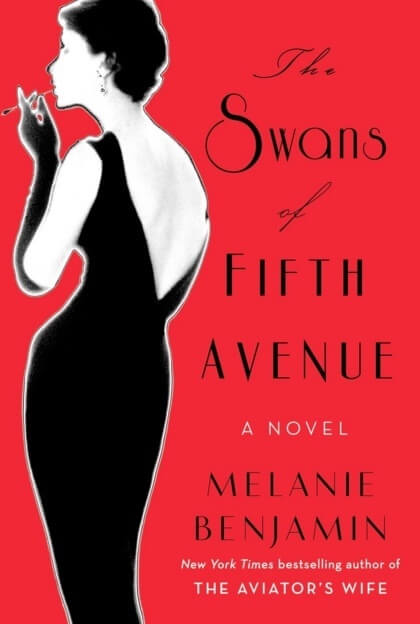 The Swans of Fifth Avenue by Melanie Benjamin

The book I’ve identified as my own Spring Break read is Ways to Disappear, by Idra Novey, described as “a madcap blend of mystery, romance, noir, and humor.” Comparisons have been made to a Coen Brothers film and Where’d You Go Bernadette: I’m intrigued! A celebrated Brazilian writer, deeply in debt, is last seen holding a suitcase and climbing into an almond tree. She utterly and completely disappears. Her American translator, Emma, flies from Pittsburgh to Brazil to help find her. Others are looking for the author, too: her two grown children, her violent loan shark and her disillusioned, washed-up editor. “Novey’s novel delivers on its promises in so many ways. Yes, there’s carnage, but there’s also exuberant love, revelations of long-buried, unhappy secrets, ruminations about what makes a satisfying life, a publisher’s regrets about moral compromises …  and an alternately heartfelt and wry portrait of the satisfactions and anxieties of the generally underappreciated art of translation,” writes Heller McAlpin at NPR Books. Ways to Disappear by Idra Novey

The Sound of Gravel: A Memoir

If these books sound like lambs to you, I’ve also rounded up some lions for your spring reading, beginning with The Sound of Gravel: A Memoir, by Ruth Wariner. The first sentence hooked me — “I am my mother’s fourth child and my father’s thirty-ninth” — and I could hardly be bothered to eat or sleep until I reached the last. Wariner grows up in a breakaway polygamist Mormon community across the Mexican border with an increasingly exhausted mother, a pack of siblings and a stepfather who is mostly around for conjugal visits, each of which seems to result in a new pregnancy. It’s the 1960s, and the family still has no electricity or toilet in the house. Her childhood is marked by some of the joys of tight-knit communal living, as well as the tensions of close proximity to “sister wives” and half-siblings. As she grows up, Wariner’s stepfather becomes an increasingly sinister presence. You’ll know from the book jacket that she escapes, but the book jacket doesn’t convey the The Sound of Music quality of her flight. Wariner makes it to California, raises her three youngest sisters, gets her GED, goes to college and grad school, and writes this book. Simple and fierce, without an ounce of self-pity, it roars. The Sound of Gravel: A Memoir by Ruth Wariner

The Sympathizer: A Novel

Another fierce and fantastic read is The Sympathizer, by Viet Thanh Nguyen, a novel set during the Vietnam War that follows the journey of a young Communist mole from Saigon to California and back to Vietnam. He finds himself, in a bizarre turn of the screw, writing his “confession” under duress in a Communist re-education camp. The son of a French priest and Vietnamese mother, he has always been caught between worlds; he has always been able to see things from both sides and this is what damns him. Much of the novel involves the deep friendship that binds the narrator and his two close childhood friends. One of the major questions raised by the book is whether deep personal relationships are our only consolation in this world, when revolutions eat their young and societies don’t seem able to exist without one group oppressing another. Our narrator veers between nihilism and hope. One reason to read this book is the perspective it offers on the Vietnam War, one that can broaden your understanding of that conflict and the complications of the human heart. The Sympathizer is currently short-listed for the PEN Literary award and won the 2016 Andrew Carnegie Medal for Excellence in Fiction and the 2015-2016 Asian/Pacific American Award for Literature, among many other distinctions. The Sympathizer: A Novel by Viet Thanh Nguyen

If you’re not in the mood for the heart-pounding action of The Sound of Gravel or The Sympathizer, you might prefer a quieter read. I’ve got two in mind: Outline: A Novel, by Rachel Cusk, and My Name is Lucy Barton, by Elizabeth Strout (the next book in this list). Outline tells the story of a woman who travels from her London home to Athens to teach a weeklong summer school course on writing. She gets settled in a stranger’s apartment, has lunch with a friend, teaches her class, goes out on a boat several times with a man she met on the plane. I’ve told you just about everything that happens in the novel, yet I haven’t told you one important thing about it. Its incredible richness lies in the narrator’s skill in listening to the people she comes into contact with and reflecting on their lives and her own. “Outline, in the most seemingly effortless way imaginable, winds up being completely captivating: the conversations are autobiographies in miniature, with all the holes, lies, and self-deceptions lurking in that wily form,” says Maureen Corrigan, of NPR’s “Fresh Air.” The New York Times selected Outline as one of its Top 10 Books of 2015, and it’s also out in paperback — two more excellent reasons to consider picking up this novel. Outline: A Novel by Rachel Cusk

My Name is Lucy Barton

The book my girlfriends are buzzing about lately is My Name is Lucy Barton, by Elizabeth Strout. Elizabeth Strout’s genius in My Name is Lucy Barton seems to me the art of Muhammad Ali: to “float like a butterfly, sting like a bee.” Strout’s story of a mother and daughter floats back and forth in time, from the daughter’s childhood in rural Illinois to her current life in New York City. She’s married, has young children, is “successful” in all the ways you can define it. But as she sits in a hospital bed, talking with the mother from whom she is mostly estranged, one of the great questions of literature is posed: can you ever escape your past? And there is the sting. The book is in large measure a meditation on the strange, wonderful, terrible power of the bond between mother and child. The novel also explores fundamental loneliness — and the ways we assuage it — a theme you might recognize from Strout’s Pulitzer Prize-winning Olive Kitteridge. My Name is Lucy Barton by Elizabeth Strout

Come As You Are: The Surprising New Science That Will Transform Your Sex Life

If you’ve made it this far in the post, you deserve an extra special treat. I’ve saved the best for last! Drum roll please: Come As You Are: The Surprising New Science That Will Transform Your Sex Life, by Emily Nagoski. With just the right wit and humor, Nagoski explains the latest research on how men and women experience sex differently, and her purpose is “to offer a new, science-based way of thinking about women’s sexual well being.” Our culture, and the scientific establishment as well, have for decades treated women’s sexuality as “male sexuality lite.” And that’s just wrong, she says. She talks about context, cues, anxiety, body image issues, “brakes” and “accelerators.” She talks about seasons of life (“You are healthy when you need lots of sun, and you’re healthy when you enjoy some shade.”) What I love most about this book is what it is not. It isn’t a sex manual. It isn’t a book that says you need to be having sex “x times a week” to be happy. It is a book about the big picture of a woman’s mental, emotional and physical health — and how sexuality can fit into that in a healthy, terrific way. Ladies, this is a book to order on Amazon, read and then give to your husband. In the immortal words of Helen Reddy, “I am woman, hear me roar!” Come As You Are: The Surprising New Science That Will Transform Your Sex Life by Emily Nagoski

Once you knock out these great reads and need to stock up on some more, stop in at BaconOnTheBookshelf.com, where you can find Jennifer Puryear regularly, and browse around for your next great read!

Stop Washing Your Face … and Have Better Skin?

A Spectacular Before and After Home Remodel