The June 2014 wedding of Conlee Adams and Alex Stringfellow began with a traditional ceremony and ended with a Gatsby-esque celebration at the Memphis Hunt and Polo Club. The bridal party prepared for the day at an afternoon soirée in the bride’s home before gathering at the Church of the Holy Communion for a splendid procession and elegant exchange of vows. A stately church setting introduced their evening’s color palette with serene arrangements of white peonies, pale blue hydrangea, sweet peas and Spiraea. Floral displays were created by Greg Campbell and Erick New, co-owners of the Garden District. While they have certainly created extravagant arrangements for some of the country’s most notable nuptials, Greg and Erick hold fast to their belief in keeping it simple and letting the flowers speak for themselves. Conlee and Alex exchange rings during the ceremony at the Church of the Holy Communion.

The reception was replete with plot twists and turns as guests enjoyed an event that was as captivating by day as it was by night. During the daylight hours of their reception, the soft palette of white, pale blue and green had all the sophistication of a proper Southern garden party. Daylight hours revealed a setting with all the sophistication of a proper Southern garden party. As the night progressed, an abundance of white lights and tulle draped across the ceilings created a scene in which time stood still. Dancing, dining and conversation continued late into the evening. The draping of tulle and white lights such that the tent and ballroom were joined in seamless transition proved to be a mood-setting element created by the Garden District.

For those who wanted to gather in a more subdued setting, there was a courtyard area inspired by the picturesque comfort of a European café. From this vantage point, guests could take in views of a lake, rolling hills and a perfect sunset and later, relax under a tranquil canopy of lights. The wedding reception included a courtyard area inspired by the picturesque comfort of a European café.

Before the wedding ceremony, Kathy and Ben Adams, Conlee’s parents, hosted a luncheon at their home for the bridal party. All of the bridesmaids put on their navy dresses from Bella Bridesmaids and had their makeup done by Heather of the Heather Boutique, along with Lucy Loveless, a friend of the bride and NYC-based makeup artist. Next, portraits were taken by photographer A.K. Vogel in the backyard. The navy bridesmaid dresses were from Bella Bridesmaids.

Kathy is a passionate gardener and the former president of the Little Garden Club of Memphis. Her passion for beautiful gardens is apparent in the pristine landscape surrounding their family home, a charming background for this prewedding soirée. Kathy Adams, mother of the bride, with her daughter at the prewedding soirée; both ladies wore gowns created by Nardos Imam.

The bride’s and the mother-of-the-bride dress were both made by Nardos Imam in Dallas. Conlee’s bridal gown had all of the features she had asked for: an A-line shape, tiers of organza, lace and a sheer back with elegant silk buttons. Kathy’s dress, which she dubbed “hydrangea blue,” was stylishly in keeping with colors of the event. Conlee’s bridal gown had all of the features she had asked for including an A-line silhouette and traditional silk buttons down the back.

The venue was transformed with the natural design and simplistically elegant arrangements for which Greg and Erick are well-known. Grand urns with aged patina were used for all floral arrangements, and the draping of tulle and white lights, such that the tent and ballroom were joined in seamless transition, proved to be a mood-setting element. Alex and Conlee enjoy their first dance together as Mr. and Mrs. Stringfellow.

Russell Whitehead and Ruthie Bowlin, sisters known for their party- and wedding-throwing prowess, stood by for the planning of every detail. One of their signature suggestions was to incorporate both formal and casual elements in the food presentation. For example, silver serving pieces were juxtaposed with the textural earth tones of McCartys pottery, and the seafood buffet was organized on a large, rustic farm table outside. 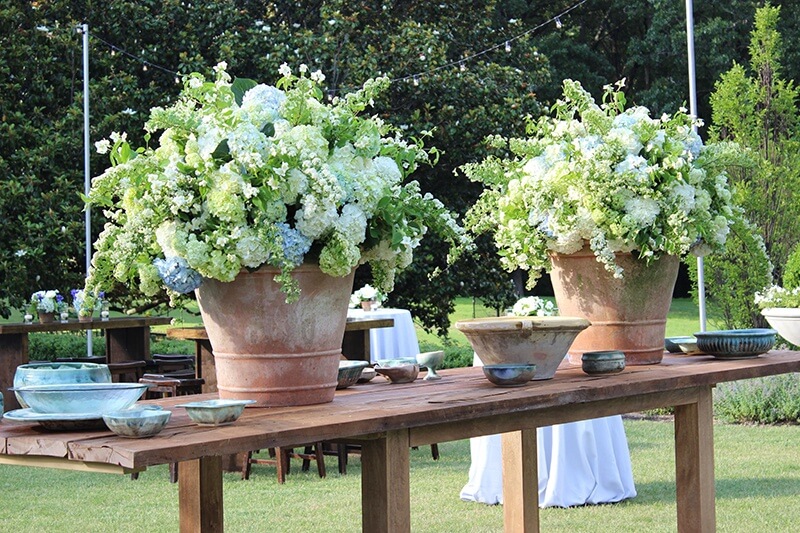 The seafood buffet was organized on a large, rustic farm table outside.

All of the silver and pottery combinations employed varying sizes and heights to add visual interest. There were several food tables filled with specialties created by the Memphis Hunt and Polo Club, including the seafood arrangement outdoors, a crepe station inside, a presentation of lamb chops and two bars. Both cakes were made by Cakes by Mom and Me. The bride’s cake by Cakes by Mom and Me 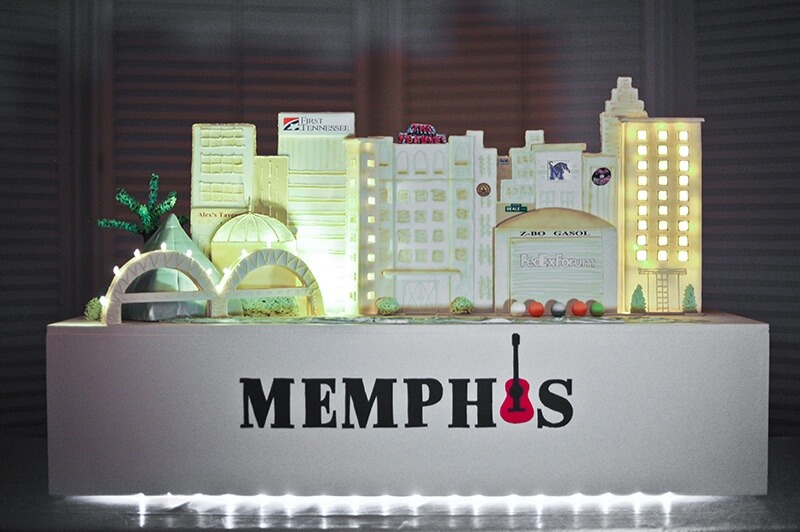 The groom’s cake from Cakes by Mom and Me A toast to Conlee and Alex!

Guests toasted and danced the night away, and Conlee brought hats, props, mustaches and boas for late-night frivolity. Small pizzas and peppermint ice cream served in miniature cones were available during the carefree final hours of this memorable day. Peppermint ice cream served in miniature cones was available during the carefree final hours of this memorable day. Conlee and Alex made a colorful exit! This was an unforgettable, multifaceted, midsummer night filled with respectful ceremony and blissful merriment. Raise a toast to Conlee and Alex!

Got wedding fever? Check out more beautiful nuptials from some of our other SB markets today: