Vicki Dortch has covered the Kentucky Derby for WLKY since 1988. That’s 28 years of hats, dresses, shoes and stamina. That’s 28 years of many hours of on-air coverage from dawn until midnight. She’s experienced every kind of weather, including some of the meteorological phenomenons that have been on display Derby week. Unlike most of us, all of her 28 years of looks are forever recorded in video and photography. We wanted to go back through all her looks and talk about the Derby fashions over the past 28 years.

Vicki was kind enough to gather together some of her favorite looks for us to ogle. While she does not have all of her 28 hats, she has kept most of the ones that she has worn, and for good reason. The majority of them were custom made by Lorie Laughead at Dee’s Crafts. Lorie knows her so well that she collects special feathers and ideas all year for Vicki’s Derby and Oaks hats. Some of Vicki’s many favorite hats

Vicki also displayed some of her most recent dresses for us to see. It was great to see how she paired the hats with the dresses. She always picks the dress and shoes first and the hat last. Usually, she brings the dress directly to Lorie for her to work her hat magic. This year, her dress had not arrived yet, so she texted the colors to Lorie so that she could get started. The most recent of Vicki’s Derby and Oaks dresses

Back in the late 1980s and early 1990s, hats were smaller and definitely simpler. When we pulled the hats out and looked at them now, we both agreed they could be beach hats. This brim is tiny compared to more recent years. This is a hat from her early years, and it is adorable and positively petite. This hat was affectionately referred to as the “satellite dish” by her co-anchor Rick Van Hoose.

Hats weren’t always as bold as they are today. They were more simple, usually neutral and could be used year after year. Colors were not as bold, either, with most hats being black, natural or cream.

Vicki’s least favorite memory from the first years is the Derby she covered in the snow, which was in 1989. She and co-anchor Liz Everman were anchoring outside on the roof of Churchill Downs all day, wearing their long underwear, coats and gloves. It snowed all day long up until right before the Derby race. Sunday Silence won that year, with onlookers freezing and cheering his victory. We all have been cold at the Derby, but this was another story completely. Vicki has to be mindful of her hat around her co-anchors, as it can get in their way. In a recent Derby when it was raining, the curled feather on Vicki’s hat became totally straight and poked sports anchor Fred Cowgill, who was sitting next her, in the face the entire day. Below, she demonstrates the entire length of the feather, to show its aggressive nature. 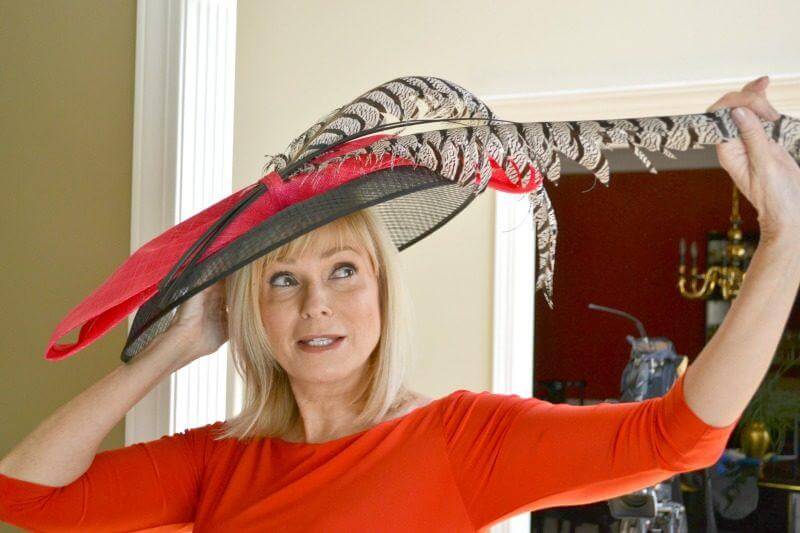 This feather straightened out in the rain during a recent Derby, only to get in sports anchor Fred Cowgill’s face all day.

Vicki has so many beautiful custom hats that they can fill up her living room. All of them are timeless and could be worn year after year. Most of all, they all have that something extra to make them stand out. Vicki says her attitude about her hats at the Derby is “go big or go home,” and that definitely works. Vicki is shown below modeling the fascinator that she donned years before (shown above) on the air and paired with a leopard dress. This black and tan fascinator would look good with just about any color dress. A close-up of this large fascinator shows its many types of curled and straight feathers. Here, Vicki’s black and fuchsia hat complements both her dress and Rick’s tie. Another fuchsia dress and fascinator, hard to top Kate Plus Eight’s feather hat! One of Vicki’s more recent Oaks fascinators featured hot pink, red and orange on a neutral base. When I asked Vicki what her favorite hats were, she immediately showed me this blue hat with peacock feathers from the last Derby. She loves this hat because it’s different. She usually does not wear blue, mainly pink or neutral colors, so this was a welcome change of palette. The dress has peacock feathers with royal blue, teal, purple and green mixed in. It is stunning in person and on camera. Here’s a close-up of the beautiful unique feathers on Vicki’s Derby hat from last year.

Another favorite hat of Vicki’s is this peach and neutral straw hat. The brim is peach, along with the underside, with tan netting and feathers. This hat can be worn with a multitude of outfits and is a flattering shape on just about anyone. This flattering peach hat with tan accessories is another of Vicki’s favorites. Here’s a close-up of both the large and delicate feathers that adorn this hat.

Thanks for letting us in your hat closet, Vicki!  We had a great time going down memory lane with all of these hats.  I think this one matches my outfit perfectly! Just a couple of gals dressing up for a normal Friday at work!

All hats shown were designed by Lorie Laughead at Dee’s Crafts. You can learn more about Lorie in our article How to Make a Derby Hat.

Check out our new partnership with WLKY where StyleBlueprint is contributing to the new WLKY Lifestyles section on WLKY.com. And make sure to download our FREE SB App to be in the know for all things local.