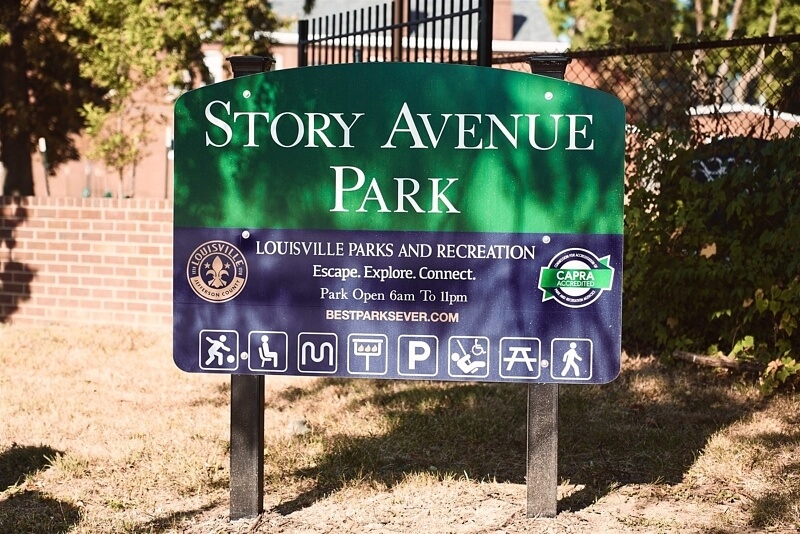 The Story Behind Story Avenue Park

When the Boys and Girls' Club closed and the building was torn down, the lot sat vacant. Now the land is enjoying renewed life as Story Avenue Park. Here's how it all came together.

Just off I-64, at the Story Avenue exit, is The Eye Care Institute. It is a business that CEO Mark Prussian has honed and grown for years. His latest project, however, which sits right across the street from The Eye Care Institute, has nothing to do with eyes. The property was home to the former Boys and Girls’ Club, which, in its final days, was a derelict structure with a sagging roof. Housed on city property, the building was eventually torn down in 2013 and the land sat empty. A few kids played hoops on a sad-looking basketball court with no net, but the city ignored the small acreage.

Mark Prussian did not.

Instead, together with Mac Thompson, CEO of the nearby banking software company White Clay, and John Moore, Chairman of the Board and CEO at Atria Senior Living, he lobbied for a neighborhood park. They wanted a place where kids could enjoy a playground, or folks could sit on benches or host a barbecue. Three public meetings were held to determine what Butchertown residents wanted out of the space, and the idea of Story Avenue Park was born.

RELATED: Butchertown: What to Do, Where to Eat & More Raising the funds to renovate the old Boys and Girls’ Club land was the easy part. Getting the city to agree wasn’t.

Instead, the Department of Parks and Recreation thought it would be a convenient spot to store its lawn equipment. “We said, ‘not in our park.’ We are going to raise the money for all the citizens — especially the people who live in Butchertown — to enjoy it,” Mark explains.

Finally, the parks department took notice of the vacant lot. Butchertown underwent a renaissance, and the residents watched their park come alive in collaboration with the Urban Design Studio, Louisville Metro Parks, and the Butchertown Neighborhood Association.

Mark and the Butchertown residents conceded to some features the city wanted, such as concrete pads beneath tables, grills and the like. At $11,000, he says it was a cost that will help the features last for decades.

“A thousand dollars (per pad) sounds like a lot, but when you add it all together, it isn’t that much,” Mark says, adding, “and personally, I couldn’t be prouder. It has what almost everyone who was involved in the early meetings wanted.” The project was finally completed this spring.

RELATED: 10 Free Things To Do in Louisville

Story Avenue Park is accessible for those with disabilities, and it has a gravel walking track, benches, picnic tables, a playground and a basketball court. Mac, who previously sat on the board for Kentucky Shakespeare, has brought in the mobile Shakespeare troupe to perform on a clever grass berm built especially for performances  — or for rolling down if you’re a kid. This former home to the Boys and Girls’ Club now boasts a playground, basketball court, benches and more. A sweet basketball court provides an opportunity for Butchertown residents to shoot some hoops. Swings round out the Story Avenue Park playground.

“One thing Louisville Metro Parks did for us that was really great was to find out about a state program that was available in 2015 or 2016. Funds were available to enhance city streetscapes,” Mark explains. The state awarded the grant and added a lovely wrought iron fence and decorative brickwork, helping to delineate the street from the park.

“Although that was not part of our plan, I think that really defines it and gives the sense that it’s a space for people,” Mark says. “On my way in, I saw a middle-aged couple walking along the track and holding hands. I’ve seen kids playing basketball. I’ve seen little kids on the slides and swings. I’ve seen so many people walk their dogs. I have lunch with a group of people when they’re available, on days that are slightly less hot than today. We think we have advanced Louisville parks, specifically Butchertown, by doing this.”

All photography by Jessa Mayhew.

Check out more guides to all the amazing neighborhoods in Louisville. Click HERE!