Take a walk with me back in time. Here are some fun facts about the year 1832:

1832 was also the year that William Kendrick and his business partner James Lemon opened Lemon & Kendrick Jewelers downtown on Fourth and Main. William Kendrick and his wife, Maria, who was the daughter of a Louisville goldsmith and jeweler. Image credit: Kentucky Online Arts Resource Blog The original ledger from William Kendrick’s jewelry store, next to a sugar or salt bowl from Tiffany’s. 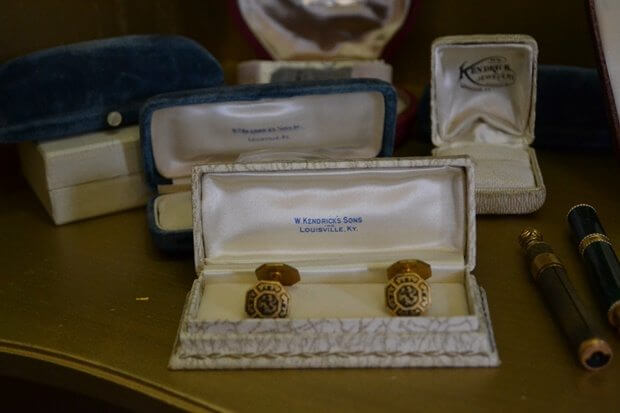 An original diamond saw, thin as a piece of paper. Run by the Merkley family now, Brian Merkley is the president and his sister, Nanette Merkley Vale, is the director of accounting. It is one of a handful of businesses that has been around since before 1850. This list includes three businesses on Chenoweth/Breckinridge Lane alone: Merkley Kendrick, Nanz & Kraft Florists (1850) and Pearson’s Funeral Home (1848). All three of these businesses are thriving. Merkley Kendrick is the oldest jeweler in Louisville and the second oldest in the United States still in existence.

Joseph Merkley was trained as a watchmaker and moved here from Jasper, Indiana, in the 1930s. Merkley owned Gray and Merkley Jewelers first downtown, and later moved it to what is now the Vogue Shopping Center. Merkley acquired William Kendrick’s Jewelry business in 1966 and renamed it Merkley Kendrick. In 1971, they moved to their current location on Chenoweth, in what was formerly the farmhouse of a large St. Matthew’s potato farm. What is the secret to their longevity?

The answer: their consistent quality in every facet of their business. They are one of the only remaining fine jewelry stores in town that is a full-service operation. They sell watches, pearls, precious stones, diamonds and gold. They are one of only a few Rolex dealers in Louisville. They custom-make any jewelry you order. Brackets for stones, any size you want.

They buy estate jewelry, as well as gold. They also have a full-service repair shop. Selby runs the repair shop. Here he is making this diamond ring as pretty as new.

But, here’s the major difference. They are not a chain. Not a part of a bigger conglomorate. They are a 100% local, family-owned business. Chances are you went to school with a Merkley. Or your mother’s wedding ring might be from here. Cartoon from 1906 on The Evolution of The Engagement Ring.

Joseph’s son, Bill Merkley, retired from the business in 2011; then Bill’s son, Brian took the helm. He has modernized important aspects of the business. Inventory that was all counted by hand is now computerized. As a result, buying has been more of a year-round process rather than a seasonal adventure. He has also invested money in the repair shop, with a top-of-the-line laser welder that his repair man Selby thanks him daily for. Nanette generously offered to inspect my wedding ring and clean it. I don’t know if I have cleaned it in over a year myself, and probably have never had it professionally cleaned. I’m sure she was appalled at its state. She cleaned it and then inspected it. Turns out two of the stones were very loose and now my ring is being serviced. Thank goodness I did this story and had this done before I lost them. Merkley Kendrick will service your jewelry, no matter where you purchased it. Nanette is cleaning my ring, a daunting task.

Family business is important to the Merkleys, as it has been for generations. Merkleys appear to be a serious bunch at their first store in Louisville.

Their family crest is pervasive around the store. From the inside decor, to the crest on the front door, to the lions which guard the driveway, you know where you are. Lion on the front door from the Merkley Family Crest One of two lions that guard the driveway

Jewelry is personal. Each piece tells the story of your life. Look at yourself and your jewelry that you are wearing and silently recount the stories behind every piece.

Louisville, in its essence, is still a small town. If people here trust you, they do business with you. For 182 years, they will do business with you. Thank you Merkley Kendrick for offering 182 years of quality service and beautiful merchandise that have been part of our personal histories and our life stories.