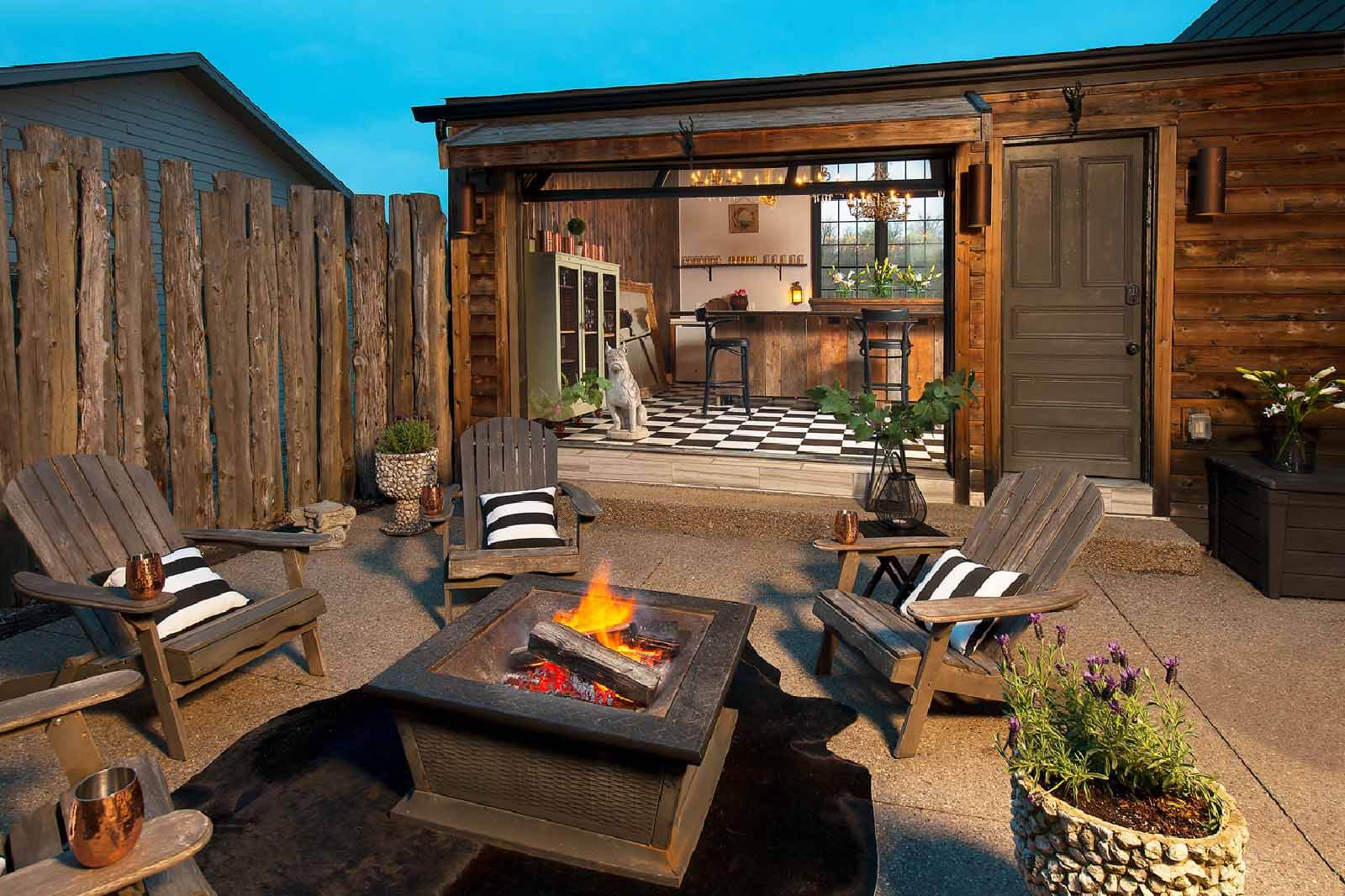 The Dreamy Cheat Lake House Retreat You Need to See

From a bunk room that sleeps 16 to a rustic cedar-lined patio with a fire pit, this creative lakefront home in West Virginia is a dreamy summertime escape!

The steamy days of summer have us pining for a lakeside cabin, and West Virginia’s Cheat Lake delivers the perfect retreat. The area, once traversed by none other than George Washington in the late 1800s (if the story holds), is known for its history of coal mining and subsequent environmental clean-up and conservation efforts. These days, it’s the picturesque backdrop for stunning lake houses with equally stunning views.

One such home, sitting on one-eighth of an acre, is a small but mighty presence amid the surrounding natural beauty. Despite its rather modest footprint, the roughly 1800-square-foot rustic abode is a labor of love that offers a second home and oasis for interior designer Esther Dormer. From a spacious kitchen that opens out to a fire pit area to a thoughtful, creatively curated bunk room where each bed has its own pull-down privacy shades, this is one lake house you’ll dream of visiting! “I love the contrast,” says Esther of the exterior of her lake house retreat. “The outside has a very plain design, and that was purposeful. It’s utilitarian, with six parking spots right in the front instead of landscaping.”

For Esther and her husband, the lake house build was a long time in the making. In fact, they acquired their Cheat Lake land eight years before they officially broke ground. “My husband and I purchased the land, and then we were so busy with other things that we didn’t start [building on it] until years later,” Esther tells us. “There aren’t a lot of lots on Cheat Lake — I think there’s only one for sale that I’ve seen on the lake to this day — so we bought it as a placeholder.” They took their time designing the two-bedroom, three-and-a-half-bath residence, which was inspired and fueled by the excitement of welcoming guests. “His” and “hers” bathrooms sit side-by-side in the front hallway. The more masculine of the two, this one boasts industrial metal lights and a mirror made of kindling. The countertop is a table Esther found, which she cut down and affixed to the wall. “The ladies’ room” is fancier,” Esther tells us. “Of course, everyone uses both bathrooms, but for fun, I made one more masculine and one more feminine.” A Moroccan-style light fixture from Anthropologie casts a glow over couches from both Restoration Hardware and Wayfair.  Although it’s the smallest room in the house, this front room has fun elements, including a chalkboard and corkboard to keep score during board game nights.

RELATED: 4 Ways to Make a Statement with Rugs

Referring to the aesthetic of the two-level beauty as “boho European rustic,” Esther says she began the building process by designing the residence on paper, then turning it over to an architect to bring it to scale. And although the exterior of the home may appear somewhat unremarkable, that’s precisely how Esther envisioned it. “It’s very plain, and then when you walk in, it’s a surprise because you’re not expecting [the interior],” she says. “When you look at the front of it, it seems so small. As you go back, because it goes down the hill, there are 17-foot ceilings.”

The grand ceiling height isn’t the only highlight. The kitchen boasts a roll-up garage door leading out to a private courtyard, and the chandeliers alone are eye-catching enough to turn heads. “In everything I do, my design philosophy is to spend the money on the lights,” Esther says. Her own home is no exception, with kitchen fixtures she has collected over the years from Parisian flea markets, Lucketts in Virginia, and Kinsey Vintage Market in Oakdale, Pennsylvania.

In fact, she has been saving up quite the collection, and she was thrilled to finally find them a home. “I have two storage units that are filled with things I love,” she tells us, ”so when I see something that I have no use for but can’t live without, I buy it, and I always find a home for it later.” To complete the look, she brought in a vintage green armoire, chairs from Restoration Hardware, and checked vinyl peel-and-stick flooring that easily withstands the wear and tear of frequent visitors. A gilded gold mirror is another treasure from Paris, which offsets a custom-built, marble-topped island that accommodates 18 people. “I like mixing the rustic wood and then using the gilded golden mirrors as a way to contrast that,” says Esther. “I love to play with opposites.” “I had the chandeliers from Paris in one of my storage units, and that started the whole [design concept],” Esther tells us. “I knew I was going to use wood in the kitchen to make it rustic and the chandeliers to glam it up.” The coffee and cocktail bar, located in a hallway off the kitchen, is a common stop for guests as they make their way through. A mirror from Garden Style Living draws attention to the setup, while an extravagant light fixture from Arhaus adds dramatic flair over the stairwell. Sourcing from various places, Esther pairs a bed she found on Craigslist with a light fixture from Neiman Marcus and functional carpet squares from Flor. “Everything in this house is pretty industrial and able to withstand a number of people,” Esther explains. “If there’s a stain on the carpet, you can swap it out for another square that’s hidden underneath the bed!”

With COVID bringing such focused attention to fostering memorable experiences with friends and family, Esther has created a lakefront retreat where elegance meets practicality. “I tried to create a low-maintenance, high-style, high-function place,” Esther says of her beauty-meets-function design mentality. “When people are uncomfortable, no one is having fun. Function was really the inspiration here — especially in the kitchen. If we have a lot of people over, where are they going to gather?” And gather, they do. Hence, the bunk room.

Stylishly utilitarian, the room features eight queen bunkbeds that have guests reminiscing about childhood camping trips. “That’s what I wanted people to feel like when they were in there,” says Esther, “that’s why we did all of the custom bunks in wood. There’s so much wood in that room when you count the walls and the beds. When I go there with my girlfriends, I stay in that same room even though there is a master bedroom. I don’t want to miss one word of conversation!” A collaboration of aesthetics merges to form an elegantly rustic guestroom, from Parisian mirrors and an armchair to the custom-built wood-paneled wall. Utilitarian light fixtures from Garden Style Living and reused doors from Construction Junction bring in an industrial feel.

RELATED: 3 New Hotels for Your Next Southern Road Trip The downstairs offers even more space for entertaining and includes a full bath, a stackable washer-dryer set, and a full-size refrigerator. Cement floors, mirrors from Anthropologie, artwork from Concept Art Gallery, lighting found on Etsy, and a vintage table from Garden Style Living create ambiance, while a billiards table provides endless fun. A courtyard divides the front and back portions of the house, with a hallway that connects the two interior spaces. “My favorite thing in the whole house is the privacy fence in the courtyard,” Esther tells us. “Those were boards that I had from another project I’d been working on. That’s my favorite element because it’s so imperfect and rustic.” “A hydroelectric plant owns the lake,” says Esther, “and they use the water to run the electricity.” On the patio, which overlooks the pretty scenery, Esther has a dining table from Garden Style Living and a marble coffee table from Hot Haute Hot.

With majestic year-round views, numerous hiking trails and water activities, and even the nearby West Virginia Botanic Garden, Cheat Lake has plenty to offer. An obvious fan of West Virginia, Esther adds, “The people here are amazing, and there are so many trees! That’s really [a draw] when you live in an urban environment.” Have we convinced you to plan your next road trip?

Special thanks to Craig Thompson for the beautiful photos.