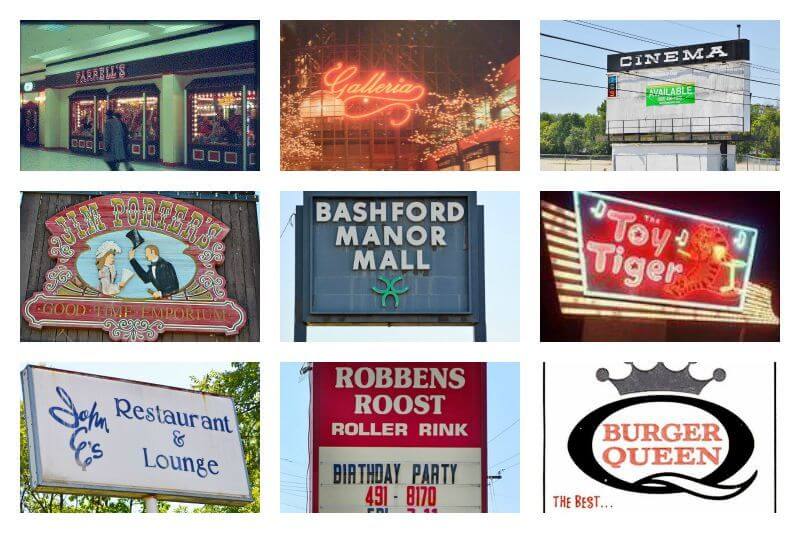 Feeling Nostalgic? Check Out These Great Signs of Louisville’s Past

Louisville, are you ready for a flood of memories? If you're feeling nostalgic, check out these classic Louisville signs that will make you love this city even more and remember the good old days.

Feeling nostalgic today, Louisville? Take a walk back through time with us, finding all of our favorite signs from days of yore. For Generation Xers, these are the signs you grew up with in the 1970s and 1980s. Signs of restaurants, movie theaters, landmarks and everything you loved about growing up and living in Louisville. These are signs that your parents will know, and maybe even your children. Get ready for a flood of memories.

(Worth noting: There are very few photos out there of some of these old landmarks, and it all makes sense. People just didn’t carry around their cameras like people carry around their smartphones now. Pictures were few and far between, but the memories are vivid all the same.)

Many of these establishments are still open; others are long gone, but never forgotten. Here we go!

People talk about the Toy Tiger like it’s still operating on Bardstown Road. But this bar, home to the Homemade Bikini Contest and wet T-shirt contests, has actually been closed since 1999. This logo lives on forever though. This same sign and logo has been in front of the Bashford Manor Mall since 1973, when it first opened with Ayr-Way, Bacon’s and Ben Snyder’s, just to mention a few. Weary shoppers could take a break in one of the many sunken “dens” surrounded by potted plants and televisions. This indoor mall is long gone and has been replaced by Lowe’s, Walmart and a Target. A picture of Bacon’s is mandatory in this post. Louisvillians will never get over the absence of Bacon’s and, especially, their incredibly generous return policy. The Galleria tried to bring a renaissance to the former Fourth Street shopping district, but it never quite regained its status. The glass roof, the lights, the pomp and circumstance … now imagine a street through it and call it Fourth Street Live. Do you remember Thorny the Monkey, who rode his bike continuously on the roof of Thornbury’s Toys? Did you get a special key to get a gift from the birthday chest on your birthday? You probably got your first bike here, as well. Thornbury’s Toys was a true family-run business in St. Matthews and is still spoken of with fondness today, especially the monkey. Located on the second floor of Oxmoor Mall, this place was a gold mine for many years. Birthday parties at Farrell’s were de rigueur for children growing up in the late 1970s and early 1980s. The thought of ordering the big sundae still brings a smile to many a Generation Xer’s face. The logo and storefront from Oxmoor Mall | Image: Johnny Ubie

Before there was Graeter’s, Homemade Pie Kitchen or Comfy Cow, there was Ehrler’s. Ehrler’s was a full-service dairy, where you could buy milk and get ice cream. They also had a delivery service. Started in the late 1960s, Burger Queen was a Louisville-based chain that served up burgers, fries and chicken (and a salad bar!). They are remembered fondly for their mascot, the Queenie Bee. Later in the 1970s, this became Druther’s (see entry below), which was eventually bought by Dairy Queen. The original Burger Queen, located in Middletown, is still a DQ today. As stated above, Druther’s was the next incarnation of Burger Queen. If you need your fix, there is still an operating Druther’s in Campbellsville. You could go there and sing their theme song, “I’d Ruther Go to Druther’s.” Live music, steaks, lobster and great fried chicken were the hallmarks of John E’s. Originally, this was the Hikes family home (from the name Hikes Point), and their family cemetery is nearby. Since closing in 2013, the building has been razed, leaving nothing but the sign, which is still intact on Bardstown Road. John E’s, where the sign remains, even though the restaurant is long gone.

Twig and Leaf is a late-night haven and a step back in time. Louisvillians are loyal to the Twig and Leaf, a venerated establishment in Douglass Loop. Rollerskating Mecca is what the name should be for this longtime, much-loved Louisville establishment. Still going strong since 1984, this Buechel landmark was a most popular indoor skating rink and junior high meetup. There’s only one Showcase Cinemas, even though there was technically another Showcase Cinemas in Stoneybrook. Showcase Cinemas is, was and will always be on Bardstown Road. Now, it sits empty, with an empty marquee and a future as a Costco. But this was, in its heyday, the place to see movies. Driving there recently to take a last picture of this famous sign, it was shocking to see the establishment in the daylight. Jim Porter’s was a great place to see live music and the antics of many a person on the prowl in Louisville. Jim Porter’s Good Time Emporium. I took this photo minutes before the sign was removed and taken to a private home.

Owned by the same owner as Jim Porter’s, both establishments closed on the same fateful day: June 1, 2015. Many a time can be remembered (or maybe not recalled at all) from Phoenix Hill, with live music and a maze of rooms to listen to it. Doesn’t matter if it’s a Thorntons, a Quik Mart, a 7-11, whatever. It’s called Convenient by Louisvillians, and that stems back to the Convenient Food Marts. They were where you got your checks cashed, got a Slushie or picked up a six pack. The Convenient was mighty convenient.

If you love seeing these pictures, there is a treasure trove of great old pictures in a group on Facebook run by Johnny Ubie (who is the image credit for many of these photos) called Back in the Good Old Days. Louisvillians be warned: this is a rabbit hole of nostalgia filled with wonderful old pictures. You have to request access to the group, but it is always granted.

Enjoy your walk down memory lane. When you find bits of nostalgia around town, post them to Instagram and tag us: @styleblueprintlville

Fill your cup with local stories you love. Sign up for our emails here: