20 Things Only Locals Know About Louisville

Consider this the secret society of lists about Louisville. Here's 20 things that only the locals know about our fair city.

I’ve been fortunate enough to call Louisville home for *gulp* 17 years. I married a native and have completely embraced the culture of Louisvillians. We are a proud city and I’m proud to call it home. But, just make sure to say the name right for goodness sakes!

Here are 20 things that only locals know about Louisville. Consider this the secret society of lists: News anchors never really leave; they either stay at the same station or go to a competitor, but everyone always says, “But he used to be on…” (Fill in the blank, i.e. WLKY or WAVE.) Everyone calls the stations by their original tag lines from the 1970s and 80s. Example: “Action 11 News.” Weathermen have lifelong committed fans here, because you have to pledge loyalty to only one weatherman. When Tom Wills retired, thousands of Louisvillians went into a panic.

2. You would never ever pay full price for a Derby ticket or buy a “package” online.

You always know someone, who knows someone, who can hook you up with tickets for a better price. You might not get a ticket until the Wednesday before Derby, but have faith that you won’t have paid as much as the poor out-of-towner next to you who paid $10K for a Derby box.

3. Speaking of Derby, you have never made it through the entire rendition of “My Old Kentucky Home” without crying.

Tears begin to well around the “Weep no more, my lady” line in the song. That’s how you can really tell who the locals at Derby are, because they are all crying during the song. 4. You park at the airport to pick somebody up.

Sometimes you wait in your car at baggage claim, but if it’s family, you better be in the building to pick them up. Locals cheat sometimes and actually park their car in the baggage claim pick up line and run in real quick to make an appearance in the luggage carousel area.

5. Need a doctor? A lawyer? A priest? An electrician?

Don’t look one up or call someone straight out of the phone book! There’s definitely one in the family somewhere you can call. Never ever hire a stranger.

Here are some examples that show how these words are used:

“Marnin! Today we are going to study Jarge Warshington. I bet it took him an ar to go acrosst the Potomac River. It was all his ideal though.”

Or, “Starms are coming in tonight. It won’t be like the Tornado of 1974, but it will be coming from the narth with a cold front, so don’t wear your sharts today.”

7. The tap water here is better than anything out of a bottle.

You are always shocked when you drink water out of the tap in other cities, realizing how awful it tastes. Why do you think our bourbon tastes so good? It’s the water, people. 8. You never, ever drink your bourbon with Coke.

That ruins it. See #7, there is a reason our bourbon is made here. It’s because it tastes so good. Don’t ruin it with a Coke! Or if you must, never order it in public. You can drink that soiled bourbon from the confines of your own private abode.

In the 1980s the Galleria was “pretty darn exciting,” according to my native husband. It was such a big deal that it even had it’s own song. Bacon’s, Byck’s, all the heavy hitters were down there. Fourth Street Live is definitely not The Galleria, but we locals still call it that! Image source: Wikipedia.com

10. You kind of miss the Falls Fountain, even though it never worked.

Historically, Louisvillians wanted a fountain in between Kentucky and Indiana, between the bridges and the Falls of the Ohio. The Binghams stepped up to give the fountain to Louisville. Problem was, it was besieged with mechanical problems and seemed like it was off more than it was on. But it’s strange crossing the bridge and not seeing it there anymore. 11. You won’t admit to knowing where anything is in Southern Indiana … except Huber’s.

Louisvillians can’t find their way to Clarksville, but my goodness, when it’s time to pick a pumpkin they can drive to Starlight, Indiana, on that winding road with their eyes closed. When the Big Four Bridge opened up on the Indiana side, you could hear half the bridge walkers say as they walked over to Indiana, “Now where are we going to end up?” All Louisvillians know where to find Huber’s. Where else would kids get their pumpkins?

12. You watch Thunder over Louisville from your “perfect” place that nobody knows about.

And no, that’s not Waterfront Park. However, if locals do go downtown to watch the fireworks, they always have a secret place to park so that they are not waiting five hours going the wrong direction downtown at the end of the night. Thunder over Louisville. We all watch from our “perfect” place. This is not 4th of July fireworks (for anyone not from Louisville reading). This takes place each mid-April to officially kick off the Kentucky Derby festivities. Image source: thunderoverlouisville.org

13. You’ve parked two miles away for a church picnic.

Namely, I’m speaking of St. Joe’s picnic at the end of the summer, otherwise known as the last hurrah. The line of cars in Crescent Hill stretches for miles and it’s always worth it. St. Joe’s picnic brings a HUGE crowd of all ages. Outsiders do not understand how seriously the entire city takes our church picnics!

14. If you can’t find your costume at Caulfield’s, it does not exist.

Does not matter the season, Caulfield’s has absolutely every costume, every wig, every mask, everything. Even party supplies are bought year-round at Caulfield’s. It is a treasure trove for sure. Every Halloween, you hear people say that they cannot find their costumes online or at XYZ pop-up costume store. Louisvillians always look at them knowingly and say, “So, you haven’t been to Caufield’s yet?” Read our post about this great place here. Need a presidential mask? They’ve got all of them at Caufield’s.

15. You eat green cream cheese on white bread and it is delicious.

You also consider it a vegetable serving because of the cucumber. #benedictine The Benedictine sandwich is a combination of cucumber and onion, green food dye and cream cheese. For a history on this sandwich, a recipe and to see this original photo, see romancingthebee.com

16. You are morally offended when people pronounce Louisville wrong.

Worst offenders are usually the flight attendants when they are landing in our fair city. You can hear the collective groan across the airplane from all the locals and someone always speaks up to correct them. Solidarity at its finest!

17. You look forward every Derby to the WHAS morning news with Terry Meiners covering the infield.

Especially early morning and especially when the cops find people’s secret alcohol stashes. Terry actually sprints with the early risers to claim the coveted spots. He covers all the costumes, all the gear, all the food, all the contraband. And the rest of us are all recovering from Oaks while we watch him. Terry Meiners is the man to watch each year. Image: WHAS11

18. All buildings are referred to by what they used to be, not what they actually are.

… old Sears building, old Bacons, old Shillitos/Lazarus. You know what I’m talking about right? You also give directions by saying things like, “It’s right across the street from the old Sears building,” and nobody bats an eye when they hear this.

And yes, you have probably seen the homemade bikini contest, the banana eating contest and bought a shot from a girl in a bathing suit standing in a trough of ice. 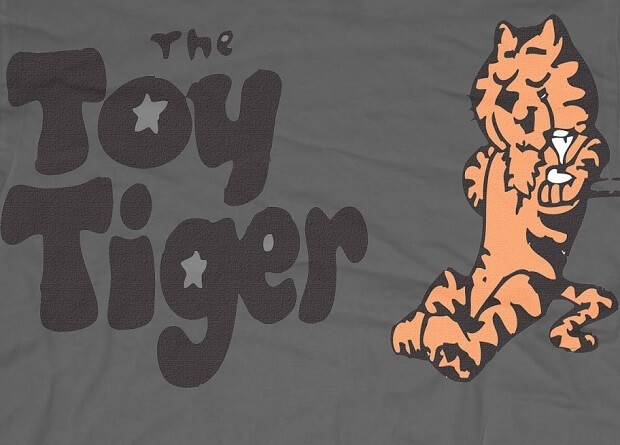 Best logo ever, The Toy Tiger.