There were some big things happening in Atlanta this month, including major announcements that will rock our city and impact the entire world (rhymes with “blooper hole”). Here’s a little recap of the most newsworthy items from May.

Atlanta Plays Host to the Super Bowl in 2019

The Mercedes-Benz Stadium, being built as we speak, will get to show the world all its bells and whistles when it and the City of Atlanta play host to Super Bowl LIII in 2019. This is a huge win for our city and will take place in downtown Atlanta right by other sports attractions like the nearby College Football Hall of Fame. Atlanta will host the College Football National Championship in 2018 and the NCAA Final Four in 2020, making for three years of consecutive, elite sporting events. Atlanta institutions Star Provisions and Bacchanalia will move from the current Westside Provisions District to a new, custom-built location at the Ellsworth Office Lofts in 2017. The new location is about 1.5 miles away from its current spot, but will offer custom space built exactly to chef/owners Anne Quatrano and Clifford Harrison’s specifications.

The Country’s First Pop-Up Vineyard Pops Up in Atlanta

As part of Atlanta Food & Wine Festival’s goal of creating new and exciting programming and events, AFWF is creating the first pop-up vineyard of its kind in the United States. Vineyard in the City will be a cool attraction for festival-goers throughout the weekend, and the space will stay open through June 30 for private events and community use. 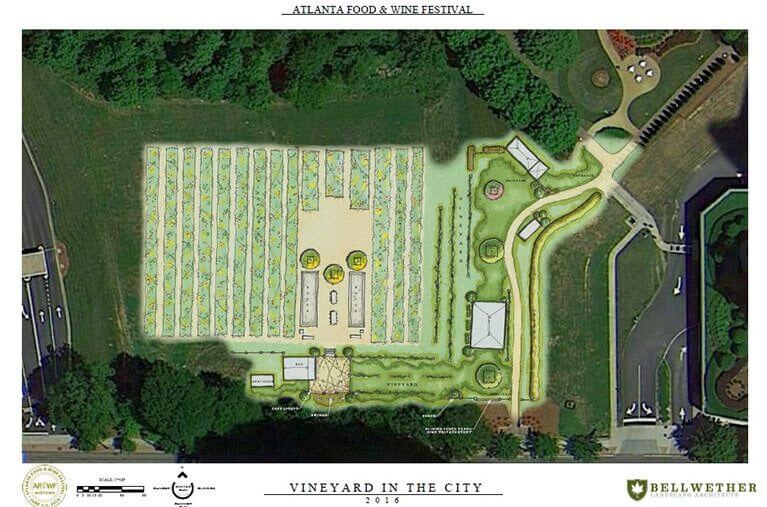 The country’s very first pop-up vineyard will be part of Atlanta Food and Wine Festival this year. Image: AFWF

Colony Square Is Getting a Makeover, and it’s Very ‘Urbane’

Midtown’s Colony Square is being re-branded and getting a much-needed makeover to help support the revitalization of the area. Architectural teams from New York (Beyer Blinder Belle) and Atlanta (Lord Aeck Sargent) will work together to create a modern, welcoming, mixed-use concept. The “urbane” concept will be used and woven through every aspect of the newly designed development.

Transplanted Texans and those who love a fresh-baked cookie know all about beloved cookie company, Tiff’s Treats. The cookie delivery company has been serving up delicious cookies throughout Texas for 17 years and now the chain is opening its very first location outside of the Lone Star State right here in Atlanta. The first opening is in Alpharetta next month, followed by stores in Midtown and Sandy Springs later this year. Woo Skincare and Cosmetics at West Paces Ferry celebrated its first anniversary on May 11 with snacks, drinks, sample bags and awesome makeup artists. May was also the month of Woo Bucks: for every dollar customers spent in May, they received 10 percent of their purchase on a Woo Bucks card to redeem in June. Woo-hoo!

As the Atlanta Braves prepare to move into their new home of SunTrust Park, surrounding development, The Battery Atlanta, has announced new tenants that will solidify this new attraction as THE place to visit in Atlanta. Newly committed tenants include boutique burger chain Wahlburgers, Kings Bowl — an upscale, retro bowling/entertainment destination — Atlanta favorite Goldberg’s Bagel Company & Deli, The Coca-Cola Roxy Theatre and much more. Atlanta is bursting at the seams with interesting announcements and need-to-know news items. Keep us in the loop if you hear of something that needs to be shared with the rest of us by messaging us on social media. And make sure to have a very fun, safe holiday weekend!