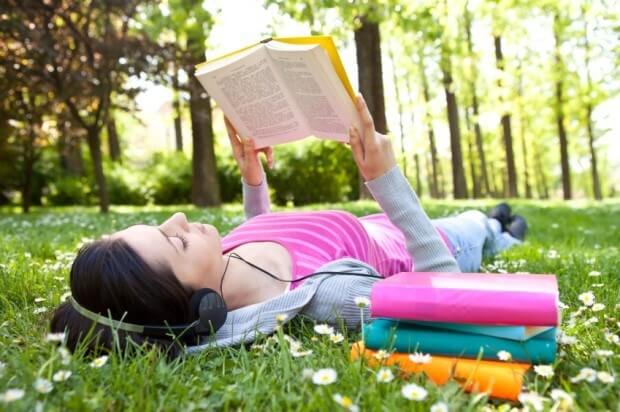 Most summer reading lists appear right around Memorial Day, which makes complete sense as we pack our bags and head to the beach or other vacation destinations. But, if you really think about it, the best summer reading comes when the temperatures soar to 90+ degrees and the respite of our air conditioned homes provides a much needed escape from the heat of the day. As you cozy up with a favorite book, a thought occurs: “It doesn’t get any better than this.”

Imagine this same scene but on a sofa with down-filled cushions with the AC on. Now, that’s summer time in the south!

StyleBlueprint contacted some of our favorite authors who are also voracious readers to ask them about books they would recommend to those of us looking for a mental escape from this sizzling summer heat. Let’s face it: we all need another book topic to gab about beyond the pro’s or con’s of the 50 Shades trilogy. So, shall it be a Mystery? Memoir? Romance? It’s all here. By the way, we didn’t stipulate that the books had to fall in the category of “light” summer reading, because in the dead heat of a sweltering day, a 1,000 page novel looks pretty darn good.

Note: click on any of the book titles referenced below to purchase from Parnassus Books, a Nashville based local bookstore that has made national headlines this past year as it is co-owned by New York Times best selling author Ann Patchett. Not only is Ann an amazing author, but she has the credentials when it comes to suggesting her best picks for summer reading in her role as co-owner of Parnassus Books. And if you haven’t grabbed a copy of Ann’s newest novel, State of Wonder, the StyleBlueprint book critics give it a thumbs up. Ann always steps up to the plate with excellent recommendations, especially when so many authors are her personal friends.

Ann: Calling Invisible Women, by Jeanne Ray. Yes, she is my mother, and yes, that makes this nepotism, but the book is really good. Clover Hobart is a busy wife and mother in her middle fifties who discovers one morning while brushing her teeth that she can no longer see herself. If that weren’t bad enough, no one in her family notices that she’s gone. When was the last time anyone really looked at Clover, or any of the other invisible women she finds in her support group? This book is funny, thoughtful, and just right for summer.

The Uninvited Guests, by Sadie Jones. Perfect for anyone going through Downton Abby withdrawals, this book is set in an English Manor House and tells the story of a spoiled and ungrateful family who must take in a large number of travelers stranded by a train accident. At  first it seems like Pride and Prejudice with a dash of Turn of the Screw, but it turns into something wholly original and surprising. I loved this book.

A Hologram for the King, by Dave Eggers. I’m a huge Dave Eggers fan. What is the What is one of my all time favorites. I picked up his book not because of the glowing reviews but for its beautiful cover (yes, I do judge books by their covers). It is one of the most physically stunning books I’ve seen in years, NOT to be purchased on an e-reader. As luck would have it, it’s also extraordinarily good. Alan Clay is down on his luck and goes to Saudi Arabia in hopes of sealing a big deal with King Abdullah that will turn his life around. The pages fly by in this completely engaging story about the intersection of panic and hope. If you haven’t had a chance to grab a copy of Ann Shayne’s new book, Bowling Avenue, by all means do. It is at the top of our required summer list because the book pulls together all the elements of a great novel: mystery, romance and death, with a one-two punch at the end of the book.

Ann: If you want to be swept away for a very long time, read Diana Gabaldon’s Outlander. This novel will never appear on a school summer reading list, but it is a tremendous favorite among smart women who relish a page-turner filled with star-crossed love, flat-out adventure, and sure, time travel. It’s the story of Claire Randall, an American nurse on vacation in Scotland in 1945, and what happens when she touches one of the ancient circles of standing stones. Transported back to 18th century Scotland–just like that!–she embarks on an adventure that continues for six more 700-page novels. Sexy, romantic, memorable, juicy. Give this book 100 pages, and you will be in for the next 3,000. Combine The Time Traveler’s Wife with the scale of something like The Thorn Birds. (You read it, you loved it, you know you did.) I want to re-read the entire series. So great.

Last Night at the Lobster by Stewart O’Nan. A slim novella almost, utterly different from Outlander. An under-performing Red Lobster restaurant faces its last day open in a gritty Massachusetts suburb. This is the stuff of fiction? In the hands of Stewart O’Nan, one of my favorite writers of realistic, small-scale drama, it most certainly is.

The Hare with Amber Eyes: A Family’s Century of Art and Loss by Edmund de Waal. If you couldn’t put down In the Garden of Beasts, go here for another angle on the insidious rise of anti-Semitism in Europe before World War II. The hare with amber eyes is a netsuke, a small Japanese ivory carving, owned by the author’s ancestors. The book traces this collection of tiny carvings as it passes through the hands of a lavishly wealthy Jewish family who move from Russia to Vienna to Paris. This is a family memoir of sorts–de Waal is exploring his feelings about his family, about the nature of art. Some have found this book a little pretentious, but I cried all the way through the back end of this book. Colin is the Robert Penn Warren Professor in Humanities at Vanderbilt University and author, most recently, of The Law is a White Dog: How Legal Rituals Make and Unmake Persons. This past April she was recently named to a distinguished class of leaders from academia, business, public affairs, humanities and the arts, the American Academy of Arts and Sciences. The academy, one of the nation’s most prestigious honorary societies, selected 220 new members for 2012. Colin joins U.S. Secretary of State Hillary Rodham Clinton, film icons Clint Eastwood and Mel Brooks, philanthropist Melinda Gates, Amazon founder Jeffrey Bezos, broadcast journalist Judy Woodruff, Civil War scholar David Blight and our own former Tennessee governor, Phil Bredesen.

Colin:Triomf by Marlene Van Niekerk. This dark comedy – moving, distressing, and dizzying- is the best book I’ve read in the last couple of years. Set in the last months of South African apartheid, it shows how beauty, and even love, can be born out of brutality. Van Niekerk takes the dirt and the remnants of a society gone bad and makes something beautiful out of what we might wish to forget. The writing is hard as bones, just exquisite.

Also, I just reread Marilynne Robinson’s Gilead and still see it as the most remarkable story of faith: about what it means to be a God-possessed soul. Folks always ask me “how can you believe in God and prayer and Paul’s call to the spirit?” This book is the answer: a delicate response to the claims of the secular.

And, finally, my all-time favorite book: Malcolm Lowry’s Under the Volcano. Besides its unforgettable portrayal of the mixed glories of mescal and tequila, it is a love story like no other. Really thrilling, if sometimes difficult going! It takes place in the lush terrain of 1930s Mexico in the shadow of the Spanish Civil War. But what is most unforgettable is the way the sentences work, the exquisite rhythm and, most of all, the passionate intensity of the writing.

Thanks so much, Ann, Ann and Colin!

What books do you recommend as an escape from the summer heat? Let us know!