Most of us have interacted with a coach at some point in our lives. Maybe a tennis coach or your kid’s soccer or little league coach. Coaches are meant to teach us something and then encourage us along the way as we improve our skills. While we typically think of coaches as people who work with youth, more and more executives, entrepreneurs and working moms are benefiting big time from hiring a life coach. What exactly is a life coach and how do you know if someone on the sidelines can lead you to the happiness and success you see for yourself? We chatted with Sarah Olin, PPC, a local life coach to executive moms, to help us sort through the ins and outs of life coaching — what is it, do you need it, etc.

Sarah started her career as a coach after years of training and teaching meditation and yoga to big companies in New York City as part of corporate wellness programs. Credentialed by the International Coaching Federation and certified by Accomplishments Coaching, Sarah founded her coaching company, Luscious Mother, four years ago — with the help of a coach. “I knew that when I had my daughter I would be some sort of helper; I knew that coaching was the conversation I want to be in with people.” Sarah Olin is a Charlotte life coach who works with executive moms through her coaching company, Luscious Mother.

According to Sarah, most women who seek coaching are usually unhappy or overwhelmed somewhere in their life. “Women come to me when they’re at the end of their rope and know that something has to change, but don’t know how or what to change,” she says.

In the multi-tasking, fast-moving world of work, raising kids and forming a fulfilling life (whew!), sometimes it takes someone on the outside to see the stuff we’re missing that’s contributing to unhappiness or feeling overtaxed. It’s weeding through this “stuff” where Sarah helps set the stage for women who crave fulfilling lives and amazing relationships with their children, their partners and, most importantly, themselves.

“Someone on the outside can see possibility where you often can’t,” Sarah explains. “Imagine seeing a beautiful house for sale, and you go inside and there is nothing but clutter – some see possibility, and others can’t see through the clutter.”

Chandra Johnson, owner of SOCO Gallery (and a former StyleBlueprint FACE) had just given birth to her second daughter, opened a new business and felt completely overwhelmed as a mom, business owner and wife to NACSAR’s Jimmy Johnson, who’s at the track 38 weeks of the year. She was at a point in her life where she needed a coach, but she didn’t even know such a thing existed. Through a mutual friend, she was introduced to Sarah, and more than a year later, Chandra has reaped the benefits that a life coach can bring. “My friends have all noticed a transformation in me. I now make decisions from my highest and best self, instead of fear,” she says.

Sarah notes that the strategies women used before having children no longer work well after. Pre-children, life is more flexible, you can work on your business around the clock if you had to, or you could run away for the weekend to blow-off stress. “Now [after having children] a new set of strategies is required, and it’s my role to help people stay in the conversation — remind them of who they are and what they’re committed to,” she says.

Chandra says that Sarah coached her to prioritize her daily life into her three most important things: family, business and herself. “The last was the hardest for me,” Chandra says, “but I’ve learned that although I’m pulled in many directions, I no longer feel guilty about taking time for myself.” Chandra Johnson, pictured at her SOCO Gallery, has enjoyed the benefits of having a life coach. Image: Zaire Kacz

What’s the difference between a life coach, executive coach and a therapist?

Sarah’s background of working with executive moms begged the question: Are you a life coach or an executive coach? Her answer: “Yes.”

“A great coach looks at the highest level of who that person is,” says Sarah. “You can’t address one part of the person and separate the business side or the personal goals — it’s about the whole person. It’s like that saying, ‘wherever you go, there you are.’”

Sarah defines life coaching as a future conversation about what you want to create and what’s standing in the way – both real and imagined. It’s about getting to the greatness of who that person is. “People know what they want, but are terrified to say it out loud because it’s safer that way.”

The majority of Sarah’s clients are referred, and getting started is grounded in goal-setting. Her ideal clients are brilliant, savvy and at the end of what they know, so it starts with defining what you want. For example, “I want to kick ass at the office, have fun with my kids and be present.” She begins with a conversation about who you are, what you’re up to and what you want to get out of coaching. From there, it’s a self-generated process, and all the results are up to you. “Coaching is a partnership, and we enter into a serious relationship, so there has to be a lot of trust. My methods are designed to help discover and seize the life you say you want. It’s a process to lead women to step into their full truth as a badass in life and motherhood,” says Sarah. 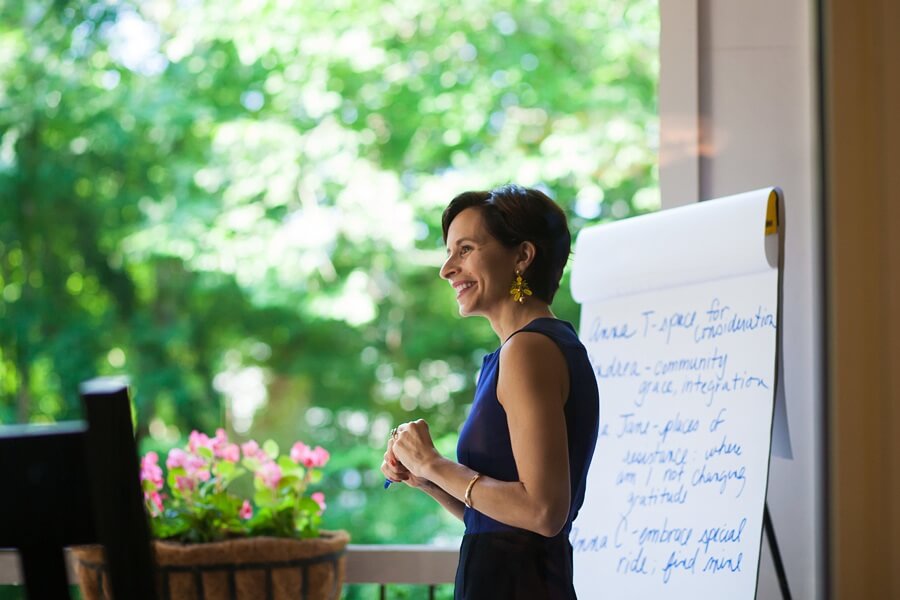 Sarah is shown here during a group coaching session, an option she offers via Luscious Mother.

Anna Tartak, mother of two boys and founder of Ashland Advertising, was at the end of what she knew and in the midst of a difficult situation when she met Sarah at a meditation class at SkillPop. She had things she needed to work on, but they felt big and were focused primarily around her business, according to Anna, who launched her agency in 2008.

“I thought I needed a business coach, but found in talking to Sarah, life coaching could help me with everything and that I didn’t have to compartmentalize my business and my personal life along with the ongoing challenges of being a working mother.”

At the time, Anna and her husband were navigating the mutual decision of him leaving the business that they ran together for the past five years. They were both afraid to make the shift, but knew it would benefit their lives and their marriage greatly.

“Coaching gave me the tools to have conversations the right way and navigate this difficult situation,” says Anna. “The path to getting there resulted in a personal transformation for me and something that I continue to work on daily.”

Are group gatherings a better option?

In addition to the individual coaching, there are also Luscious Mother’s group retreats. Group coaching is a great option for those who like the energy they get from like-minded women who are on the cusp of big things.

For Anna, something amazing did result in her participation in a group retreat — validation. She believed so strongly in the transformative effects of life coaching that she decided to take the step and become a certified coach in her spare time.

“I put it out there at the group retreat that I wanted my accomplishment [to be] coaching certification, which is a year-long process, so that I could do corporate coaching,” says Anna. “I put it out there so that Sarah would hold me accountable to doing it.”

Best of luck on achieving that goal, Anna!

To learn more about life coaching and the services Sarah offers, visit lusciousmother.com.

Start your day on a positive note — subscribe to StyleBlueprint for the best of all things Charlotte!