Love knows no boundaries, distance or state lines. And though timing can be an issue when it comes to matters of the heart, hopefully, destiny overcomes all — which is what happened in the case of Emily and Dustin Miller.

Dustin, from Macon, Georgia, and Emily, from Lawrenceville, Georgia, seemed to have a storybook meeting. The two attended Georgia College and State University in Milledgeville: Dustin was a model for a fashion show Emily was organizing and hosting for one of her marketing classes. They began dating and the sparks kept flying for more than two years. After graduation, however, Emily’s job transferred her to Texas and the long distance put a strain on their relationship, leading them separate ways. But that’s the funny thing about true love and destiny: It always finds a way to survive. Though their courtship was momentarily interrupted, Emily and Dustin Miller found their way back to Georgia — and each other. Love at first sight … over the span of years

More than two years after moving to Texas, the pair started talking again and rekindled the romance, eventually leading Dustin to move across state lines to be with Emily. During a trip back home to Georgia for Christmas in 2014, he popped the question at Emily’s parents’ lake house. The couple’s family and friends surprised the blushing bride-to-be a few minutes after and it was then that Emily and Dustin knew they wanted to move back home to Atlanta to have the wedding of their dreams in their hometown, and to live closer to their loved ones. In early 2015, that’s exactly what they did: They returned to their roots. Emily had six bridesmaids and one flower girl to precede her down the aisle. Footwear, including the groomsmen’s socks, were a big part of the wedding. The bright blue bridesmaids’ dresses were a lovely contrast against the brick backdrop and other natural materials throughout the Miller’s event. Emily knows how to take aim when trying to achieve her goals, like the perfect wedding. After all, she’s a competitive, collegiate basketball player who had been coached by her father her entire life (Check out those wedding shoes!). She started with a venue that could match her “modern vintage look,” which came in the form of historic 550 Trackside in Lawrenceville. The historic, renovated 1904 cotton warehouse evokes a charming Old World style. “I didn’t feel like I had to do much decorating because 550 Trackside already had so much character inside.” Who says you can’t wear sneakers with a gown?! Trackside 550, a former cotton warehouse, was refurbished into a romantic venue with dramatic details like these massive chandeliers. Emily and her dad wore black and white Converse. “I grew up playing basketball in Converse and he was my coach most of the time growing up.” Dustin also sported some bright blue kicks to join in on the fun. The couple exchanged vows by beautiful natural sunlight pouring in through the windows. “While we were both living in Texas, we went home for Christmas in 2014 to be with our families,” says Emily. “That New Year’s Eve, Dustin and I went up to my parents’ lake house. He took me out to our dock where he had strung lights all around. A friend plugged in the lights once we got on the dock, and he proposed to me. He had all of our family and friends there at the house when we walked back in. It was a huge surprise!” About 160 people attended the Lawrenceville wedding. Each layer of the wedding cake had a different fruit filling.

Uniting European aesthetics with a Southern flair came in many forms, including the cigar bar and corn hole for people to play outside during the cocktail hour. The 160 guests filled up on delicious dishes prepared by Cornbread & Caviar, including a buffet of chicken cordon bleu, grilled beef tenderloin, asparagus with hollandaise sauce and the always-perfect mashed potato bar. Emily and Dustin’s wedding cake featured five layers, each with a different fruit filling including raspberry, strawberry and lemon.

The bridesmaids’ bright blue dresses — complemented by the bouquets’ bright pinks and corals — made a great highlight against the natural materials and earthy colors of the venue’s exposed brick and stone. Though most of the wedding focused on clean lines and simple designs, there was a little bling to be found throughout the event, including Emily’s gorgeous lace and embroidered dress from Bravura and her sparkly Converse (matching her dad’s black ones). Guests were treated to a cigar bar and corn hole toss during the cocktail hour. 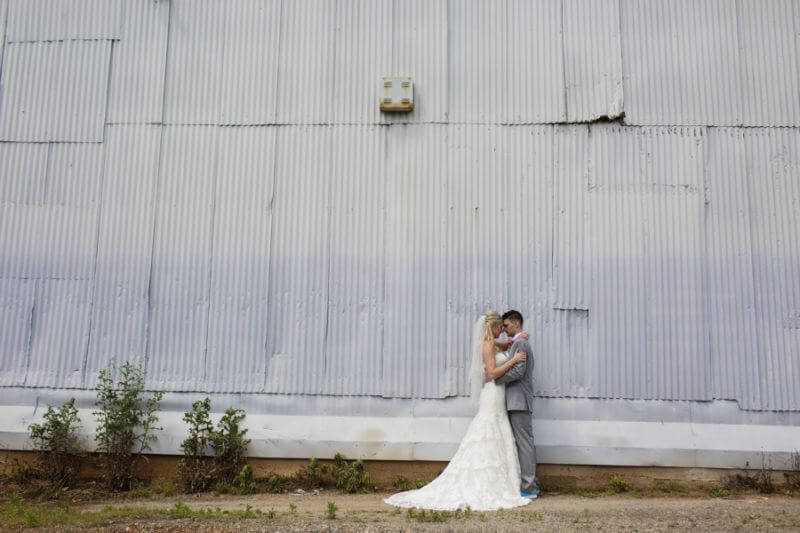 Emily and Dustin only have eyes for each other. Dustin loves to dance, so he had two different coordinated dances with the wedding DJ that night. When the tunes came on, everyone at the Miller wedding was ready to party! The couple left their wonderful event under the dancing light of sparklers held by every guest.

The dust has settled since their gorgeous event on April 23, 2016, which featured two amazing coordinated dances. Since then, the pair — along with their three dogs — has settled nicely into their Grant Park home. They look back fondly on their magical day together and are excited about what the future holds, and we wish them a lifetime of love and happiness!

A massive thank you to Lovi Blush Photography for sharing these gorgeous photos with our StyleBlueprint readers!

Check out some of our other lovely Southern weddings and see how some of our favorite couples celebrate their love.