The theater is dark and quiet, except for the illumination of the single “ghost light” set center stage. The stage manager is the first to arrive at the theater. Keys jangle with her every step as she passes from stage right to stage left, going by the naked, caged light bulb, lit to appease the theater ghost, a standard practice in the theater world. The working lights flicker on, and she begins to quite literally set the stage for dress rehearsal, her props assistant speed walking in zigzag lines from place to place, carrying flowers, cups, candles, a hat, a candelabra and random bric-a-brac. Members of the stage crew trickle in, and the random thwack and buzz of tools begin as the lighting designer runs through the lighting cues — a pool of electric blue stage left, a hot white spotlight center, a warm spread of sunset-like orange and pink. A wig stands ready to transform an actor into character. Actors prepare for showtime in the costumer’s dressing room at The Virginia Samford Theatre. An actor’s arsenal of stage makeup

Talia Pepke, director of marketing at The Virginia Samford Theatre, fills actor Jan Hunter in on some important changes before showtime.

The superstitious actor who arrives long before her call time paces around the stage, running lines under her breath. The director sets his coffee down and begins shooting stage-set questions toward the booth. A group of partially costumed actors circles up stage left, performing a vocal warm-up ritual that resembles a tribal dance, sending a chorus of actorly voices bouncing into the balcony. The stage is now teeming with activity and noise, as the crew slowly moves into the wings and the booth, and the director gives the actors mental and emotional space to get into character. “Places!” says the stage manager, and the lights dim. It’s showtime at The Virginia Samford Theatre. The lights come up on the opening moments of “Calendar Girls.” The Virginia Samford Theatre is one of the few theatres in the U.S. to have permission to produce the play which was originally presented in London in 2009. The presenting rights have presently been pulled in the U.S. by the licensing company due to the fact that “Calendar Girls” will soon be produced as a musical on the London stage.

The ladies gawk at the flower contraptions built to cover them. 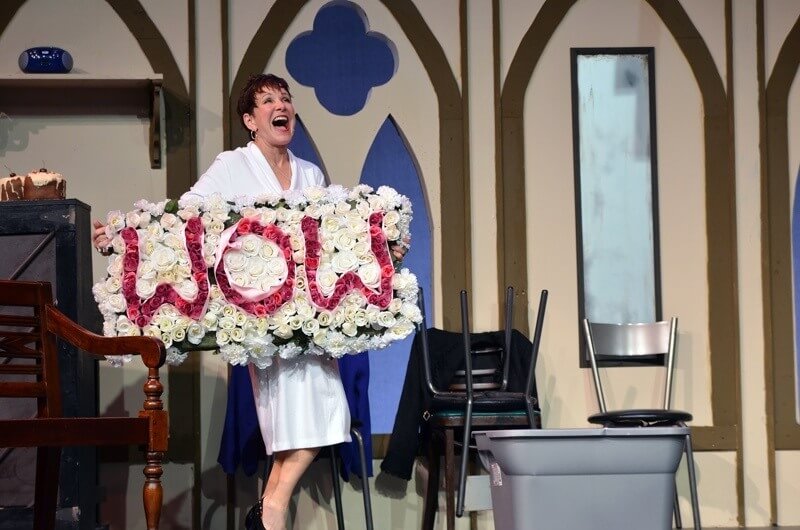 Jan Hunter, a longtime Birmingham performer, plays the role of Chris, one of the two ladies who came up with the idea for the calendar.

The play is “Calendar Girls,” the true story of a group of British women who created a “nude” calendar to raise money for the settee in the family waiting room of the local hospital’s cancer ward in memory of their friend’s deceased husband. These members of the Women’s Institute, the British version of the Junior League, share laughter and tears as they bond together to help their girlfriend in a time of need. In the process, the ladies become a media sensation and raise enough money to build a new wing for the hospital.

“It’s a beautiful story about friendship, the understanding that women have for each other, charity and humor. It’s touching, funny and we all take our tops off!” says actress Jan Hunter, laughing and adding, “You won’t actually see anything. It’s all done very tastefully.” The cast of talented Birmingham actors also posed for a tongue-in-cheek calendar that will be sold at each performance, with a portion of the proceeds going to the UAB Comprehensive Cancer Center.

The eight complicated characters each have a moment in which they also expose themselves emotionally. Actress Julie Meadows’ character, Ruth, is one of the most fearful of the calendar concept, but she bravely, yet timidly, tiptoes into the experience, hopeful that it might help her husband see her in a new light. “All of the women in this play have ‘stuff’ to deal with, and doing the calendar helps each of them to grow and change. Ruth has taught me things about life, love and the human experience that I would not have realized without her,” says Julie, who is in her acting debut at The Virginia Samford Theatre. The ladies squirm uncomfortably as they look at a particularly unsettling slideshow. The Mrs. Claus costume gets a strong reaction. The ladies need a little liquid courage as they take on the roles of calendar girls. The ladies strut their stuff.

Jan Hunter, who cut her teeth performing in New York City’s Circle in the Square, has performed in more than 25 shows at The Virginia Samford Theatre. In “Calendar Girls,” she plays Chris, one of the two women who conceive the calendar idea. “She’s a go-getter,” says Jan. “She’s a bit insensitive at times, but the life of the party, and there’s always a party.” Jan’s appreciation of this local theater runs deep. “I love the size of the stage, the history, the intimacy, the staff. I love what it stands for in the community and its integrity,” says Jan, who also extolls director Dane Peterson’s directing style. “Dane’s an actor’s director,” says Jan. “He’s a performer himself, so he’s aware of the way things feel. He’s precise in his direction, kind, fair, creative and quite witty.”

“When I was asked to direct the VST’s production of “Calendar Girls,” I made the conscious decision to not rent the movie,” says Dane. “This is our own highly personal, emotional, humorous and intimate interpretation of the story. Each actor is so very gifted and brings so much of themselves to their performances that I didn’t want my direction to be skewed by the original cast.” The ladies show their delight and surprise at the printed calendar. The two ladies who came up with the idea for the calendar, played by Jan Hunter and Celeste Burnum, share a close bond.

While the play and her character, Ruth, have provided a cathartic experience for Julie, the overall experience has mimicked that of the calendar girls’ bonding. She cites the downtime spent together, the lunches and the brunches and the fun backstage time. “This experience has been a time in my life that I will hold close to my heart forever,” she says. “I feel there is a trust and respect for each other. These women are fabulous, so working with them has been a true honor and privilege.”

Director Dane Peterson is not only passionate about supporting Birmingham’s immensely talented theatre community, but he also feels strongly about the theatre. “Theatre is a deeply human experience. In film, there is little communing with your fellow audience members, and no communion at all with the actors. Coming to a live theatre performance allows for something more, for a symbiosis to develop. We all breathe together, laugh together and cry together.”

Check out the opening moments of this hilarious and touching play, then go see “Calendar Girls,” running from November 5 -22, at The Virginia Samford Theatre!

Thank you to The Virginia Samford Theatre for the images of the ladies onstage!