A smoothie is a puréed drink, often made with fruit, milk, yogurt or ice cream. Many of the smoothies we will read about today expand this definition to include vegetables, peanut butter, nuts and seeds! This quick culinary summer favorite is much more popular than a person by the same title (i.e., a charming man, perceived as being insincere!)

Is the smoothie a healthy choice? Not always. The main culprit is sugar and, in turn, the empty calories that accompany this ingredient. One smoothie filled with all of the wrong ingredients can have up to 1500 calories! While many people may drink a smoothie as a meal replacement, the absence of protein in most recipes makes them fall short of being a substitute for lunch … because you will probably be hungry again long before dinner.

Want to quickly lower the calorie count? Look out for an overabundance of sugar in fruit purees and say no to whipped cream on top. Avoid processed sugar, too much fruit juice and ice cream, unless your smoothie is playing the role of “dessert.” If so, go for the small.

Not all smoothies are created equal, and two places in Memphis have you covered from east to west! The Cosmic Coconut and The Love Shack are two of your best options for local, organic, vegan smoothies packed with fresh, nutritious ingredients. They have already done the thinking for you. All you have to do is pick one and enjoy!

The Cosmic Coconut is located in the Sanderlin Center in East Memphis This smoothie and juice bar also serves a full menu of salads and sandwiches.

At The Cosmic Coconut, they have a routine of hand-cutting and freezing fresh bananas at least twice per day because most of the smoothie recipes call for bananas. Samantha, the assistant manager at this smoothie bar, explained that bananas replace the texture and thickness that many less nutritious combinations achieve with ice. Another primary ingredient in most of their smoothies is fresh coconut and/or coconut milk, used primarily as a healthy sweetener.

I have tried and recommend the Got Grass? smoothie, the Candy’s Elixir smoothie and, for those who prefer a more traditional flavor, the Chocolate Covered Almond  and the Vanilla Happy Dazed smoothies. A great meal at The Cosmic Coconut is a smoothie (or equally filling juice drink) and a Kale Salad. Definitely a superfood meal– and I was apprehensive about the raw kale at first, but this salad is really tasty! The Cosmic Coconut is located in the Sanderlin Center. A no-fuss interior that is comfortable and inviting. 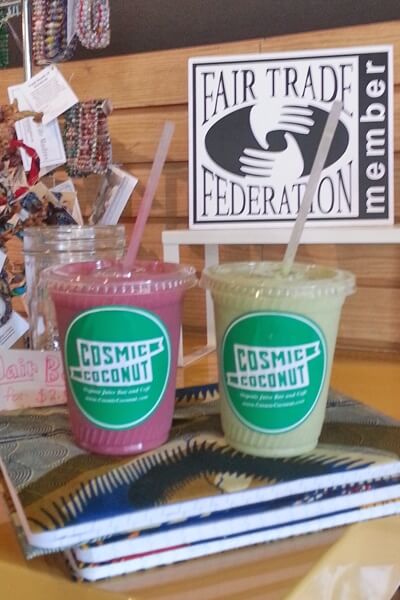 (r to l) Candy’s Elixir smoothie and Got Grass?

The Candy’s Elixir smoothie contains beets, kale, hempseed, banana, fresh coconut and coconut milk. You primarily taste the berries. I do not like beets, but with this beverage you can take in the benefits of eating beets without (in my opinion) suffering the taste of this vegetable.

The Got Grass? is made with wheatgrass, pineapple, banana, hempseed and coconut milk. Yes, it is green in color. There is less than a 1/4 cup of wheatgrass in the recipe, but this is enough to turn everything a daunting green. However, a small dose of wheatgrass will help strengthen your immune system and detoxify your body. The main flavor is banana. If you don’t believe me about the taste of these two smoothies, here’s proof: my kids gave both a thumb-up! Samantha is preparing my smoothie with freshly cut bananas and raw veggies. Fresh coconut milk is the sweetener in most of their smoothies. Why is it green? Less than a 1/4 cup of wheatgrass can turn an entire drink green! (Just like berries dictate the color of a blended beverage.) Samantha is putting wheatgrass through the mastecator to ready this fresh, healthy ingredient for my Got Grass? smoothie. Rod is pouring a Candy’s Elixir.

Welcome to The Love Shack, located on Walnut Grove (near the main library), a cafe that opened this spring. They specialize in green smoothies and organic juices as well as coffees and teas.

The Love Shack, located on Walnut Grove, near Midtown. Mars and Venus: filled with ingredients to get in touch with both sides of your personality!

Nick, my main advisor that day, explained that the ingredients in the Mars will appeal to male characteristics and the Venus beverage will invigorate those traits that are considered feminine. All of this was fun to discuss, but the undeniable fact is: Both drinks are ultra healthy and taste great, a winning combo! Chris (the owner) and Courtney helping us decide what to order. Daniel is busy chopping up fresh vegetables to prepare flavorful juices and green smoothies (“green” in this context means “with veggies”). Nick was my main advisor on the Venus and Mars, two smoothies that I will now order often at their drive-through window.

Nick and Daniel, some of the staff at The Love Shack, named a few ingredients at the top of their list when they are whipping up a personal smoothie at work or at home: peanut butter, pumpkin seeds, coconut milk, bananas and most any kind of nut or seed. Both agree that two of the most complete protein options for your smoothie are brown rice and pea protein. A few sweeteners they often use that are also in many recipes at The Love Shack are stevia, vanilla bean, bourbon vanilla, molasses, agave syrup for fruit smoothies and occasionally maple syrup. Nick points out that when shopping for smoothie combinations, you should try what looks enticing because if your body is craving something, that is what you are needing nutrition-wise at that time. And she can cook!

If you make your smoothies at home, you certainly know and choose what’s in it. I played around with a few of the seven original smoothie recipes from Gwyneth Paltrow’s new cookbook, It’s All Good: Delicious Easy Recipes That Will Make You Look Good and Feel Great. I recommend the Almond & Kale Smoothie and the Creamy Avocado & Cacao Smoothie. Both are vegan and packed with nutrition. Using avocado is another way to add creamy texture to your smoothie and cacao powder is considered a superfood. You will have fun with this cookbook. It is a recent StyleBlueprint Find that I purchased this month.

Join me as I take on the task of learning more about what to order at these hip local juice bars and cafes, new territory for me! These healthy blends of vegetables, fruits and nutrients seem like an ideal way to, as our grandmothers would say, “Eat (or in this case, drink) your colors!”