With all due respect to New York City, Chicago is the big city getting all the buzz. As a vacation destination, it’s easy to get to, with a lot going on downtown: revitalized buildings and stunning new architecture, the Chicago river as a focal point, outdoor art that’s oh-so Instagram-worthy, more restaurants than you’ll ever have time or money to explore, and guess what … you know all that to-do about Hamilton being so hard to see in New York? Well, skip that scene by catching it in Chicago through early 2018. (Bonus: No creepy Elmos in Chicago’s theater district like in Times Square.)

Summer and fall are ideal times to go, so plan now. Here’s an itinerary to cover the hot spots: 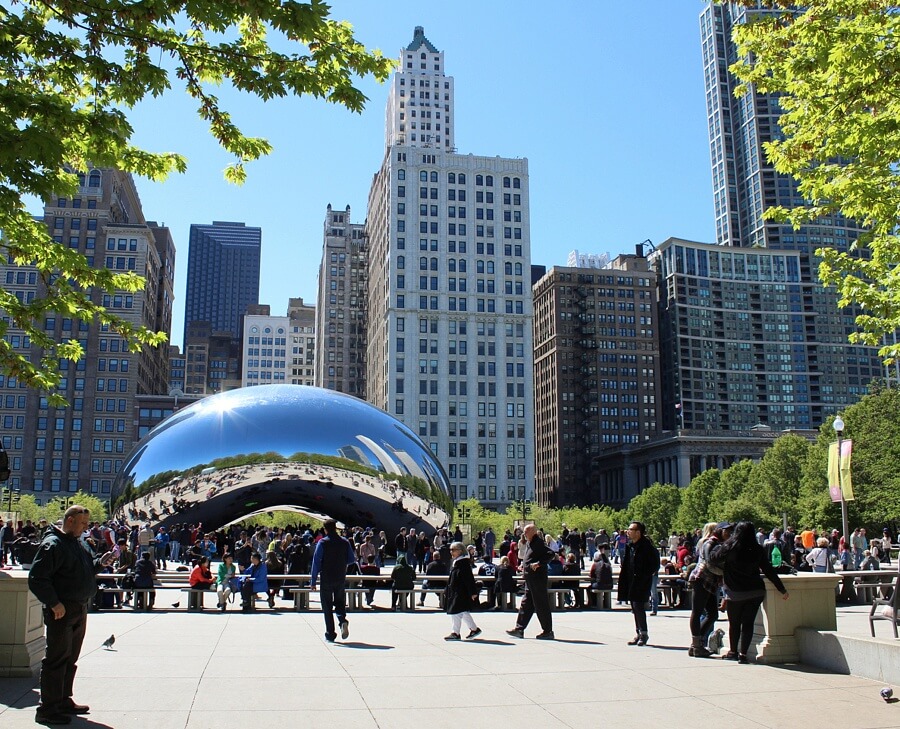 This sculpture was designed to look like liquid mercury, but visitors to Chicago love Millennium Park’s Cloud Gate (known to most affectionately as “the bean”) because of the cool reflections it makes.

Arrive late morning and stash your bags at the hotel before check-in. (Make sure to have your walking shoes handy to grab out of the suitcase; Chicago is a walking town.) Two downtown hotels offer convenient locations — both just a few blocks from Millennium Park and the theater district. Right across from the iconic Marshall Field’s store (now a Macy’s, but the architectural glamour is still there), The Alise Chicago radiates historic charm from its turn-of-the-century building, most recently known as the Hotel Burnham. Rooms are modern, but the lobby and elevator banks recall eras gone by with ironwork and old-fashioned telephones. As a swanky contemporary choice, the Radisson Blu Aqua places you in a high-rise building so cool you’ll even learn about it on any architecture tour. The wavy balconies that define the Aqua building will also give you a great view of the city — either the park or river.

Go ahead and declare now … all diets are on hold for this trip, but you’ll be working the calories off for sure. First stop? Lunch — Giordano’s deep-dish pizza at the Millennium Park location. Their Chicago classic includes pepperoni, mushrooms, peppers and onions, but there are other options as well.

Stroll through the most-photographed greenspace in Chicago … Millennium Park. Surrounded by stunning skyscrapers, the 24-acre tree-lined park is a visual feast in all directions — especially looking up. Everyone makes a stop at Cloud Gate, a.k.a. “The Bean,” a stainless-steel sculpture in the shape of a kidney bean, with its endless possibilities for reflections of the city — and selfies. Nearby, the Crown Fountain consists of two 50-foot glass towers facing each other, with an ever-changing video of Chicago faces projected on them, with water squirting out of a mouth at intervals. The Frank Gehry-designed Jay Pritzker Pavilion is a futuristic concert venue set among the grass. A wildflower garden in Millenium Park is a welcome contrast to all the city life around. Skyscrapers in Chicago built over the last few decades tend to have glass — and particularly blue glass — on the exterior to reflect the sky and river. The aptly named Aqua building (far right) has wavy balconies that look like ocean waves; upper floors are condominiums, while the lower floors house the Radisson Blu. The historic Chicago Athletic Association building — now a hotel — is a treat to walk through and have a drink at Cindy’s Rooftop, known for its views of Millennium Park and the lake. Crown Fountain in Millenium Park is a water feature and video combined, with its loop of Chicago faces, some of which spout water — from the mouth, of course. The popular art sculpture uses dual structures facing each other, giving the illusion of a reflecting pool between the two.

The park leads right into the Art Institute of Chicago, where doors proclaim its recent claim to fame: “The #1 Museum in the World” according to TripAdvisor readers. And no wonder … the original 19th-century building has expanded to include several wings and outdoor exhibits. Visitors have many centuries and cultures to cover (300,000 works of art in all), but popular attractions for a quick visit include Edward Hopper’s “Nighthawks,” George Seurat’s “A Sunday on La Grande Jatte” and the fascinating miniature rooms.

As the evening sets in, grab a drink on the balcony bar of Cindy’s Rooftop only a couple blocks from the museum but many floors up with an entirely different perspective. What a view!

For the evening’s activities, there are two options. First, if you want to see a show at the famous Second City club, the comedy improv group that helped launch Tina Fey, Stephen Colbert and Steve Carrell, among many others, it’s probably smart to Uber that way early in the evening and eat at one of the neighboring pubs before the show. Tickets are best purchased ahead of time, and include several different choices; you can’t go wrong with the production of The Best of Second City. Or, food aficionados will put up with a wait and communal tables to eat at the highly acclaimed avec restaurant, with its inventive small-bites menu that includes dishes such as chorizo-stuffed dates, charred asparagus with pickled lemon and butcher steak with blistered fava beans and celery-walnut tapenade. Puffy baked pita sits on top of carefully molded hummus, itself adorned with roasted carrots, a pickled egg, and chile-almond sauce, at the popular avec restaurant. Their specialty is Mediterranean cuisine, and small shared plates are the way to go.

Remember, carbs are your friend in Chicago, and for breakfast at Wildberry Cafe, you can enjoy all sorts of breakfast treats, both savory and sweet. The Napa Valley omelet with figs, Applewood bacon, Havarti cheese and scallions falls into the former category, caramel apple-pecan crepes the latter. The restaurant is walking distance from either hotel, and may involve a little wait, so bring your newspaper along and get there early. A don’t-miss for any trip to Chicago (preferably on a sunny day) is an architectural boat tour. Shoreline Sightseeing has hour-and-a-half tours on the Chicago River throughout the day, with costs around $40/per person. Guides share historical tidbits about Chicago, as well as specific info on buildings and the topography.

A short walk from the city’s boat docks (Navy Pier or Michigan Avenue), the cozy Labriola’s restaurant offers a good place to rest and revitalize. You can go light with the Michigan Avenue chopped salad, or a little heartier with their pastas. Afterwards, the stores and architecture along Michigan Avenue make for a good walk back to the hotel. Guided architectural boat tours along the river give the inside scoop on iconic buildings in Chicago from all decades.

If an evening play is on your schedule, grab an early reservation for 5:30 p.m. at The Atwood along with other theater-goers at this chic American eatery inside The Alise hotel. Start with the burrito toast — fennel, orange and chiles with cheese on olive-rosemary bread, then check out one of their seafood specialties. If you’re hitting the theater district, it’s only a couple of blocks away. The Atwood restaurant and bar sits on the ground floor of the historic Reliance building, now The Alise Hotel. Pan-seared halibut and gnocchi sit in a sauce of bitter greens at The Atwood, a popular spot for theater-goers before or after a show.

By reading this now, hopefully you can snag some tickets to Hamilton in advance (although closer to the date is possible, too — just more expensive), and head over to The Private Bank Theater to experience the smash hit that combines American history with rap music. No tickets to Hamilton? Check Chicago Plays to see what else is running. The Private Bank Theater will be home to Hamilton, the award-winning Broadway production, in Chicago through January, 2018.

Yes, any sort of high-rise viewing tower is touristy, but just as everyone needs to go to the Space Needle in Seattle once in your life, it’s fun to head to the top of the Willis Tower (known to locals as the Sears Tower) for the Skydeck viewing. Beat the crowds by getting there right when it opens at 9 a.m. Not only will you get 360-degree views of the city from 72 floors up, but brave souls can venture out onto the see-through boxes suspended over the downtown streets, which is as freaky as it sounds. SB TIP: Buy a CityPass if going to the Skydeck, Art Institute and even one more attraction to save with the bundled price of $99.

Take the Red Line train to Wrigley Field, whether there’s a game or not. This iconic baseball stadium is home to the Chicago Cubs, those World Series champions and sentimental favorites. Wrigley Field offers tours of the stadium on both game days and non-game days, but visitors see more areas when the players are out of town. Grab a hot dog at Byron’s hot dogs (a humble establishment around since the ’70s) or the more organic destination of Uncommon Ground. If you dare … see-through viewing boxes are suspended 72 floors up from street level at the Willis Tower.

Before you catch your flight back home, end the trip on a very civilized note, with a legendary Palmer House brownie in the glamorous and historic Palmer House Hotel (near Millenium Park). The rich chocolate and gilded ceilings will make you swoon.

Thanks for a great weekend, Chicago. We’ll definitely be back!

All photos by Lisa Mowry