Atlanta architect Frank Neely has an appreciation for houses with an implied pedigree. “I like designing a new house that feels like it was built in 1910 and has stories behind it,” he says. Kitchens are a little more challenging, he acknowledges, since his homeowners want the function of a modern kitchen with the look of a historic space.

Working with interior designer Wendy Meredith, Frank came up with elements that provide a lasting quality to this new kitchen in Atlanta’s Buckhead neighborhood. Choosing cabinetry with a furniture-like appearance was one step. Color was another. “The trend now is for a kitchen to have stark white cabinets, but these are more of a creamy white, definitely a more warm look,” says the architect. Cabinets were also hand painted, he notes, which adds a handmade touch. Charming features in this new-to-look-old kitchen include a walnut countertop in a herringbone pattern, café curtains to soften windows, and horizontal wood planks as backsplash. Ceiling beams made of wormy chestnut bring in more aged-wood goodness. A CornuFe range from La Cornue is a focal point of the kitchen. “Having a black range feels more special than a stainless one,” says architect Frank Neely. “It looks like it could be iron.” A raised fireplace is artfully placed in an arched design, with tile surround and a honed black granite countertop.

Other materials continue the cozy feeling. Rather than a stone or tile backsplash, painted wood lines the walls around the kitchen. The island countertop is made of walnut arranged in a herringbone fashion as another aged patina. Perimeter counters are covered in classic Carrera marble.

A raised fireplace is positioned at one end of the kitchen, as an added turn-of-the-century feature with current-day appeal. “It’s something we’ve done a number of times to warm up a room visually and otherwise,” says Frank. The homeowners originally opted for a wood-burning scenario, but then later switched to gas logs for convenience. A built-in desk area allows children or the wife to spend time in the kitchen for homework or computer time. Because the wife has a separate office elsewhere, the kitchen desk can stay tidy. Windows framed in mahogany draw the eye outside. Appliances, such as the dishwasher and refrigerator/freezer, are covered in cabinetry rather than metal. Lantern-style sconces by the windows evoke a New England flair.

Dark-stained windows are a favorite feature of the architect, a way to evoke an old-house feeling and call attention to the outside. These are mahogany, stained an espresso color for added contrast. “The dark makes you more aware of the windows, which is nice on a sunny day,” he says. 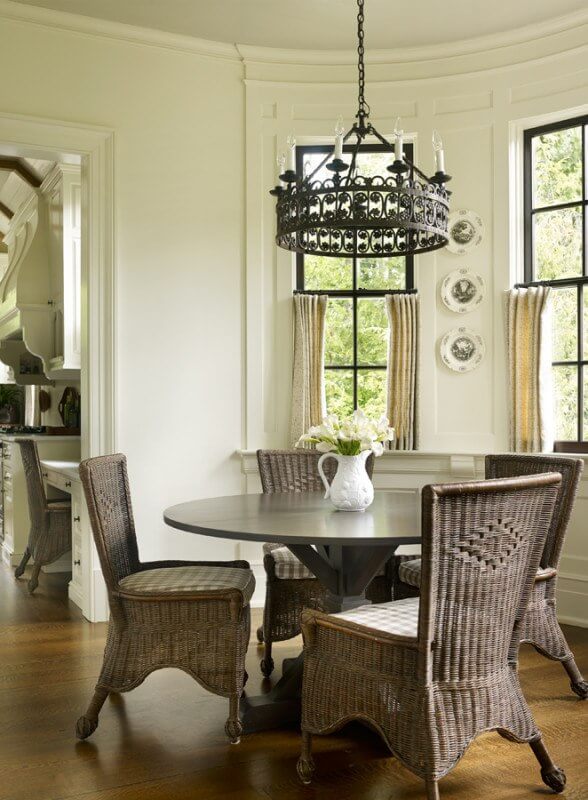 This kitchen is definitely an inspiration for anyone looking to renovate their own kitchen space. Thanks to Frank Neely for sharing this beautiful project with us today.