Sky Castle Gastro Lounge: A Modern Throwback to Lakeview’s Past

Offering an inventive menu with global panache, Sky Castle Gastro Lounge is a retro-chic nod to Lakeview's past through a thoroughly modern lens. Check it out!

Imagine it’s 1950s Birmingham, and you’ve managed to get out of your parents’ house to enjoy a teenage taste of freedom and to savor the deliciously dangerous sounds of rock and roll from WSGN’s DJ booth, the Sky Castle. It’s the place to hear songs by new artists like Elvis Presley, Chuck Berry and Jerry Lee Lewis, whose suggestive, electric and exuberant songs move you to dance among friends. Hungry for this intoxicating sound — and perhaps a cheeseburger and a milkshake delivered via roller-skating waitress to your car window — you and your friends hop in your tanklike Chevy and head for the Sky Castle at Ed Salem’s No. 3 Drive-In in Lakeview, excitedly primping for an evening of seeing and being seen at the hottest parking lot in town. The original Sky Castle was owned by Eli Coirie and known as Eli’s Sky Castle Drive-In before it was sold to Ed Salem and became known as Ed Salem’s No. 3 Drive-In. Image: Charles Preston via the Birmingham Public Library Archives The uber-cool neon sign outside of Sky Castle Gastro Lounge

Fast-forward to 2016 and that electricity has returned to Lakeview, reincarnated as the Sky Castle Gastro Lounge on the very same lot as the original Ed Salem’s Drive-In. On the ground floor of the 29 Seven apartment and retail building on Seventh Avenue South, the new Sky Castle, which opened two weeks ago, is like walking into a retro-chic mashup of “Mad Men” sets. Think futuristic 1950s diner meets mod lounge meets forward-thinking sports bar. At the entrance, a replica of the original Sky Castle DJ booth serves as a backdrop for the hostess stand, and TVs cover the walls for sports games and streaming live concerts. The hostesses stand before the replica of the Sky Castle DJ booth and look on at the crowded restaurant. The after-work crowd enjoys drinks and conversation in the lounge areas. “We wanted to create a whole retro throwback look as a nod to the history here, ” says Black Design Architecture interior designer Haley Treadaway. “But we also wanted it to be really modern, cool and masculine, like an upscale sports bar with a retro edge.”

The Gastro Lounge serves seasonally driven, next-level pub fare, creatively infused with popular global flavors and, alternately, classic international dishes with a Southern spin, such as the Korean barbecue fried wings accompanied by Alabama white barbecue sauce with serrano peppers, cilantro and gochujang. “We have a pork belly and fried oyster appetizer with a kimchee puree that is really good,” says Executive Chef Haller Magee, who comes from 10 years as executive chef at Satterfield’s. “It’s a Southern progressive style with global influences. Some ingredients are a little out there, but we introduce them in creative ways, executed with classic French and Italian cooking techniques. There is definitely something for everyone.” 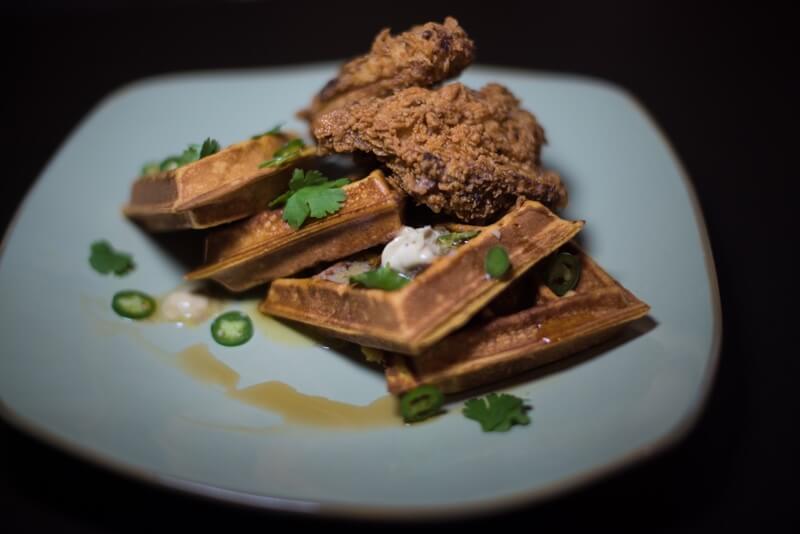 The red wine-braised beef short rib is served atop a butternut squash puree with charred Brussels sprouts and pomegranate seeds.

“Our father was related to Ed Salem and he actually worked there in his first year in the United States,” says Jason Bajalieh, who co-owns Sky Castle, Slice Pizza & Brew and Sol’s Sandwich Shop & Deli with his brothers, Jeff and Chris. Their father came to the states from Jerusalem when he was 18 and eventually opened his own joint, the original Sol’s Deli downtown. The three “bro-owners” cut their restaurateur teeth in their father’s eatery. “I would leave school and walk to 20th Street to my dad’s restaurant and hang out there every afternoon. It was fun. I mean, you want to do everything your father is doing at that age, so we’d ask him questions, take orders, wash dishes, clean — we did it all. So to say it’s instilled in us is an understatement. We had no choice!” And the Sky Castle team instills that same commitment to service in their staff, going to far as to train a full staff of paid employees weeks in advance of opening. “A lot of restaurants don’t do that, but we want to because we feel that first impression is worth it,” says Jason. Prior to opening, Chef Haller and Sky Castle’s general manager, Ellen Rodgers, worked with the staff on extensive food and beverage education, followed by rigorous testing, as well as three nights of live service for the restaurant’s soft opening, which allowed them a chance to iron out some kinks before the grand opening. The detail-oriented team continues to make adjustments as they become accustomed to the restaurant’s rhythm, and that attention is apparent in their service.

The growth in Lakeview in just the past five years is remarkable. The once-forgotten hub is again buzzing with local residents walking their dogs alongside the bustling restaurants and bars. “After we opened Slice, four to five restaurants came in after us and that really helped change the game,” says bro-owner Chris Bajalieh. “And millennials want to be able to walk everywhere, to work and play all in the same area, so there’s been residential additions. I mean, downtown as a whole has seen a resurgence, and it’s all over the country; it’s not just Birmingham.” The brothers’ passion for local growth is palpable, and they were intentional in their choices for the new restaurant. They traveled the country, studying other successful restaurant concepts in rapidly growing, locally driven neighborhoods to define their new eatery. “When we go to Nashville and Atlanta, we see these off-the-wall concept restaurants that are upscale, but not white tablecloth. And we wanted to create a place where you can relax and enjoy a game, but also enjoy really good food, drinks and cocktails,” says Jason. “I mean a lot of things in Birmingham seem to be really geared toward recycled wood and soul food, which I love. Slice is kind of like that, but we just really wanted to push the bar with this and do something completely different. And I think we’ve done it.”